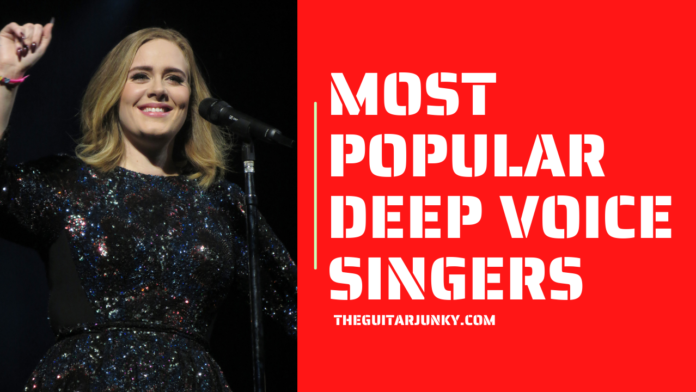 Not all male singers are gifted with a deep, low voice.

But for our featured most popular deep voice singers, having that bass voice (basso in Italian, which means low), they have that low C talent that most men fail to achieve.

Some of them can even sing lower; they’re simply exceptional.

If you’re ready, let’s check out the most popular deep voice singers in the music industry.

The most incredible singer with a wide vocal range. You’d feel every note vibrate deep into your body and bones when you listen to this man.

He has the power in his low notes, and you won’t believe the same man is singing in Home Free.

This man can even sing five octaves!

There’s nothing more to be said, right?

But well, let’s mention that this man is also an award-winning songwriter and music arranger.

Not to forget, he’s also a comedian, a writer, and a visual artist.

But aside from his remarkable artistic talents, he’s also one of the best bass singers, who is unlike any other because he can sing five octaves.

He never fails to leave his audience in awe for his voice, wit, and charm.

His deep voice stuns everyone that listens to him, and there’s no doubt because he’s one of those rare singers with an unbelievable vocal range, dexterity, and versatility.

And what’s more? He does it all like his remarkable vocal basslines, pop leads, and country crooning.

Foust continues his greatness and still writes and arranges music.

“The Best That I Could Do” is his solo album that received rave reviews and features his deep vocals, humor, and poignant lyrics.

Actor, singer-songwriter, author, and guitarist, Johnny Cash was indeed one of the most popular deep voice singers with a wide influence in the 20th century.

He’s also one of the best-selling artists of all time, having sold over 90 million records.

There was one time when Bob Dylan wrote that the singer “sounds like he’s at the edge of the fire.”

You’ll be amazed by how big the voice of this man could be, and no wonder why his name has become synonymous with country music.

He left us with his deep voice and great music, but one man, Vince Mira, is said to resemble Cash’s voice.

So, when you listen to his songs “I Walk the Line” and “Ring of Fire” you might be reminded of Cash.

But anyway, Johnny Cash is one of the most unforgettable deep voice singers. His tonal depth and low range are certainly incomparable.

When he was young, Cash used to have a high-tenor voice, but later his voice changed and became a bass-baritone.

A songwriter and English singer, Adele graduated with a degree in Performing Arts and Technology from the BRIT School (2006).

In the same year, she signed a contract with XL Recordings.

This happened after one of her peers posted and shared a demo of her on the then-popular platform Myspace.

Hits like “Someone Like You,” “Rolling in the Deep,” and “Hello” are three of her greatest hits that highlight her deep and wide range vocals.

A lot of people assume that she’s a contralto, but not.

Her voice is only hers, indeed.

It becomes more distinct as she’s climbing up in the register and becomes the clearest between the middle C to C5.

He might not have the deepest voice on this list but certainly possesses a distinct, deep voice, which is a bass baritone.

A New Jersey-born songwriter, singer, and musician, who cited Bill Medley as a musical and vocal influence, Glenn Danzig is remembered for his tenor vocal range and baritone voice, which is sometimes compared to the likes of Jim Morrison, Elvis Presley, and Howlin Wolf.

According to the Singing Carrots (and its database), Danzig’s vocal range is F#3 – B4 (1.4 octaves).

You might have been wondering what his lowest-pitched song is?

How about that with the highest pitch?

A user from the Range Planet said that Leonard Cohen had a baritone voice at first, but later ended up more of bass in the 80s (because of drinking and smoking).

For a bit of his biography, Cohen is a poet, writer, and singer from Canada.

The artist, whose debut album “Songs of Leonard Cohen, left a legacy for his fans all over the world and he’s said to possess a low voice that remains unbeatable in his native country.

Cohen songs with remarkable low notes include “Ballad of the Absent Mare,” Almost Like the Blues,” and “Bird on the Wire,” A Singer Must Die”, “The Traitor”, “Jazz Police”, and “Tonight Will Be Fine”,

However, decades of hard work and a lot of performances along with his nicotine habit affected his voice.  It pulled his baritone to what Cohen calls the gift of a golden voice.

He’s an American actor and musician often called “The King.”

Presley was also known for his deep voice, both when singing and talking and is praised for his perfection.

The singer, who was introduced in the movie “Love Me Tender,” was often referred to as the man with the voice of liquid gold.

He could sing anything and fans claim Presley was pure class.

Barry White was an American record producer, singer-songwriter, composer, and musician with one of the most popular and deepest voices and lowest bass in the music industry.

Often described as the “Velvet Voice of Love,” White’s voice has a distinct sensual and seductive sound to it, and not to mention that equally seductive words in his songs.

His voice melts the hearts of fans all over the world, and that’s thanks to his deep and resonant sound – which a lot of people, both men, and women, found 100% sexy.

According to some critics, he created his sound through his chest cavity – in the same manner as Morgan Freeman and James Earl Jones do.

Nevertheless, he can make even the most mundane words sound rich beyond what you can imagine. His voice is silken and sensuous, clearly complementing what it lacked in range.

Most known as the lead vocals of the Doors, Morrison was a great singer-songwriter with a soothing and deep voice.

He had a great voice, and it was nice to just listen to him talk, either in reading poetry or talking in interviews.

His voice was soothing and relaxing and all dramatic at the same time.

He was a baritone, although can easily reach a tenor.

Morisson is regarded as one of the most influential and iconic vocalists in the history of rock, and that’s mostly because of his distinctive voice, poetic lyrics, wild personality, and unpredictable performances.

He deserves to be on this list of the deep voice singers that rock the music industry.

He’s the lead singer of Type O Negative, a gothic metal band, and he’s known for his deep, monster voice.

Gothic metal music is characterized by its extreme power in both vocal and instrumental levels.

Throughout his career, his most notable low notes are in the songs “Bloody Kisses,” “Male Supremacy,” “All Hallows Eve,” “Dead Again,” and “Are You Afraid?”

Born on November 30, 1955, Idol first achieved his popularity in the 1970s as the lead singer of “Generation X,” which was famous in the London punk rock scene.

But later, he shifted to a solo career, which made him quite a couple of recognitions, one of them being the lead artist during the “Second British Invasion” in the US.

He started his musical career as Chelsea’s guitarist back in late 1976 but soon left it to form another band, Generation X, with Tony James, his former bandmate.

There you have our list of the most iconic and influential deep voice singers that have impressed and keep impressing millions of fans all over the world.

They’re incomparable and memorable at the same time, and it cannot be doubted that they have shaped music through the years, not just for their very low voice but also for their colorful lives.

Which among these artists is your #1 pick? Tell us in the comments below.