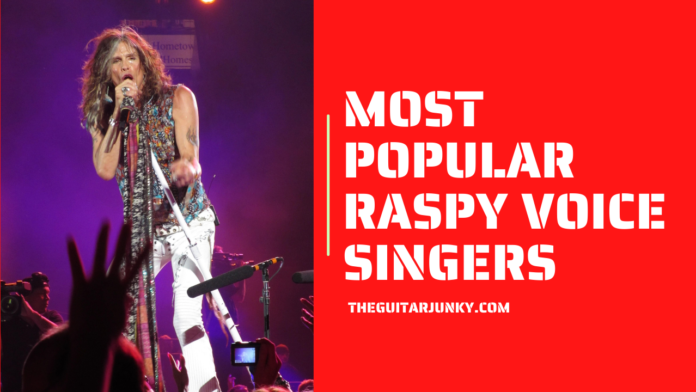 A raspy voice is a breath of something unique with the right style of music. This kind of sound gives off a cool and at the same time, a sexy tone in a musical piece.

While some people are concerned of how damaging this type of voice can be, singers use their unique voice quality to their advantage by having strikingly smashing hits.

Here are the most popular raspy voice singers you might want to check out.

The world of rock and roll will never be the same without Steven Tyler’s raspy singing voice.

Critics have coined Steven’s “raspier than normal” singing voice in some of his performances.

Even with notoriously high notes, Steven Tyler’s voice has made a great impact in the rock and roll community, and in the world of music in general.

He started rocking out in the 70s, and since then, he has a legend on the stage.

Beyond singing with a raspy vocal prowess, his fans also commend his songwriting skills and his showmanship in various performances.

The awards that the famous singer Adele holds are innumerable, and she has her powerful voice to thank for that.

The singer and songwriter have various studio albums, extended plays, and singles that showcase her raspy and husky voice.

Her top songs have reached number one on UK and US Charts, and the Billboard.

Her powerful vocal range has been compromised after she suffered a hemorrhage on her vocal cords.

Since then, the famous singer has been more careful as the repair of her vocal cords has been very delicate and risky.

Dubbed as the Queen of Rock and Roll, Joan Jett’s raspy singing voice has helped her and the women of rock and roll have a spot on the stage.

Her legacy started after founding The Runways and continued with Joan Jett and The Blackhearts.

Her voice has made a mark in music, as she used to have a unique rendition of various songs.

Nicknamed as Pops or Satchmo, the American raspy singer has made his way in the industry by starting out as a trumpeter.

His love for jazz, singing and playing instruments has been exponential.

He is easily recognizable with his gravelly yet rich sounding voice.

Bonnie Tyler’s songs are still celebrated to this day, and this is all thanks to her voice.

Back in the 1970s, she underwent a surgical operation to remove her vocal nodules. After that incident, she continued singing and found a voice out of her situation.

She has been known with her distinctive voice and powerhouse belting of some high notes.

If you want to have a chill and calm afternoon, John Mayer’s raspy yet airy vocal tones will be there to make your ambiance more comfortable.

What the fans love about his voice is how clear it still sounds, albeit his breathy techniques.

John Mayer has undergone surgery for an abnormal growth on his vocal cords.

Although the surgery is a major threat to his career, he was able to outgrow the healing process.

It took him some time to perform live again, but he has been writing songs and has been singing on some occasions.

Known as the “blue-eyed soul”, Michael McDonald has made an impact in the music industry with his trademark voice.

He is known for his husky baritone, and this has earned him Grammy awards. He has also sold millions of records for at least three decades.

The singer and songwriter has one of the most distinctive musical pipes in the world of R&B, rock, and soul.

His soft and warm vocal cloak is so unique that you will even recognize his raspy singing voice while singing the karaoke.

The popularity of Bryan Adams has stood the test of time, that even to this day, his hit singles are glorified in various events and even in karaoke.

People adore his unique voice because he does not try too hard to sound distinguishable from the other artists.

The Canadian rock star became very popular in the 1990s and was famed as the king of power ballad.

If you are in search of a ballad with the right amount of breathiness and hoarseness, Bryan Adams has got you covered.

The electric stage presence of Janis Joplin made her reign for 15 years. She is among the most successful and sought after rock stars in her era.

One of the pitfalls in her singing career is her swollen vocal cords.

While some appreciate how raspy and powerful her voice is, she has to go through a steroid injection to keep the vocal cords calm.

As her voice has been set on stage for hundreds of performances in the course of her career, her vocal cords were damaged over time.

She has even instituted a no-talking rule in between performances to preserve her on stage.

One of the best vocalists of all time, Cobain has left an unforgettable legacy to his fans all over the world.

In fact, he is regarded as one of the most iconic musicians in alternative music and remembered as the Gen X‘s spokesman for both his anti-establishment persona and angst filled song writing.

For a bit about Cobain, he started singing at the age of two and writing a song about a trip to the park at age four.

He also admitted that he’s trying to rip off the Pixies when composing “Smells like Teen Spirit,” one of the last songs written for the album “Nevermind.”

Singing with a raspy voice can be damaging to the vocal cords.

Singers who have performed for most of their lives might have developed vocal cord alterations.

But this does not spare them from growth of new masses, nodules, or other possible damaging inflammatory tissues.

Rock stars and singers have made their names known in the music industry with their signature raspy voice.

Although they should be more careful to preserve their talent, their ability to sing with some raspy and hoarse tone should be celebrated.