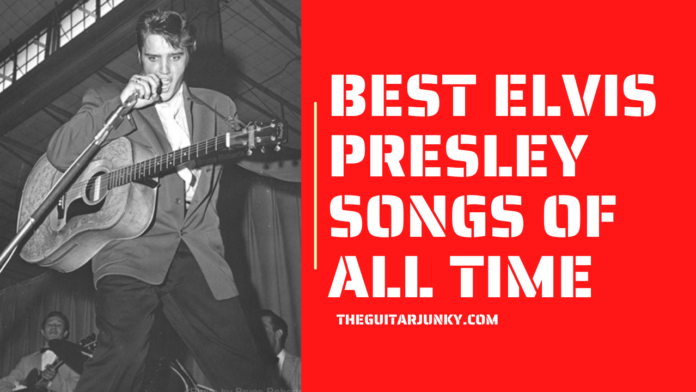 The King may already be singing with the angels, but the best Elvis Presley songs still deliver heavenly music to contemporary audiophiles and music lovers across generations.

Rock and Roll, as we know it, would not be here if not for Elvis Presley’s revolutionary musicality and showmanship ingenuity.

However, the King did not only get Rock and Roll to the mainstream.

He also influenced the moral and social changes that swept throughout the US and the world in the mid-20th century.

Hundreds of artists and thousands more aspiring performers look to the King for inspiration in their brand of music.

In this article, we will look at ten of the best Elvis Presley songs that defined the 20th-century music industry.

These hits continue to dominate streaming platforms, such as Spotify.

Let us start our roll call with one of Elvis Presley’s Grammy Hall of Famers – Hound Dog.

Not only is Hound Dog a phenomenal hit during its heyday in the 1950s, but it remains a mainstay in many radio stations and streaming platforms.

Rolling Stone also listed this song as one of humankind’s 500 greatest songs, landing on the 19th spot.

Perhaps the only stain to this record is that Hound Dog is a Big Momma Thornton original.

Dancing to the beat of this 1950s classic is a cinch, thanks to its crafty composition and upbeat tempo.

Blue Suede Shoes may not be an Elvis original.

However, Elvis Presley owned it and catapulted the song into the National Recording Registry, and earned a spot in Rolling Stone’s 500 greatest songs in humankind’s history.

The song is a rockabilly standard popularized by Carl Perkins in 1956, which the King transformed into a rock and roll standard.

Generating more than a hundred million streams on Spotify, In the Ghetto is an enduring Elvis Presley classic that signaled his comeback in the late 1960s.

This RIIA Platinum-certified hit departs from Elvis’s rock and roll persona, giving his fans a rare glimpse of the King’s moving vocals.

It topped the charts in West Germany, Sweden, Australia, and a few other countries, propelled by its mellow tune and sad lyrics that will have you reaching for your Kleenex.

With more than 123 million streams on Spotify, A Little Less Conversation is another 1960s-era Elvis Presley hit that remains popular in the 21st century.

This song topped the charts worldwide, receiving certifications from at least ten music-loving countries, and adored by many artists.

The message is clear: more action, less talk. Perhaps many audiophiles will agree this is what the world needs now.

With a lot of bantering from left and right, too many people are suffering between the tirades.

The percussion is upbeat, driving the song while providing a jazzy framework to an electrifying guitar riff.

One of the most popular songs of all time, Always On My Mind is a favorite cover ballad of many seasoned and aspiring artists – Elvis included.

Seven months after Gwen McRae delivered the original, Elvis Presley released his cover version, transforming the song into a ballad that any gentleman can sing to his loved one.

The song performed well in the Canadian, Belgian, Irish, and British charts.

It also clinched the Billboard Adult Contemporary chart’s third spot, despite losing to Willie Nelson’s rendition at the Grammys.

Mae Boren Axton and Tommy Durden turned a depressing story into one of the King’s greatest hits.

Heartbreak Hotel may have a sad inspiration, but Elvis turned it into a masterpiece, complete with an eight-bar blues progression characteristic of the time.

It also topped the Billboard Top 100 for an unprecedented seven weeks.

The song title may lead some people to believe that Burning Love is one of Elvis Presley’s famous ballads of the late early to mid-1970s.

However, this song is the King’s last rock and roll hit with a country vibe and a catchy tune, where the opening guitar riff sets listeners to a magical ride.

While this song did not land any major awards, it did peak at the Billboard Hot 100’s number two spot and reached number one on the Top 40 Charts of Cashbox.

One thing notable about this piece is that it was the only commercially successful entry in Elvis’s Burning Love album.

More than 146 million Spotify users stream this song from their devices, making it one of Elvis Presley’s best and most enduring songs.

Almost everyone who has been in a dysfunctional and mistrusting relationship can relate to Suspicious Minds’ message.

Perhaps that is one reason this 1968 song has a steady stream of followers on Spotify – about 256 million to be precise.

The song is characteristically Elvis, complete with a catchy melody and a danceable tune.

Elvis fans love this song because it was the King’s last hit single to reach No. 1 on Billboard’s Top 100.

A Platinum-certified hit in the US and UK, Suspicious Minds also landed the 91st spot on Rolling Stone’s 500 all-time greatest songs.

Black Hawk Down, Lilo & Stitch, Blade Runner 2049, Breathless, and Frequency are some Hollywood films that used Elvis’s song in their soundtrack.

With its lively beat and a captivating guitar intro, there is no mistaking the popularity of the King’s Jailhouse Rock.

The opening tune is enough to get you in high spirits.

You are already swinging to the beat by the time you get to the chorus.

Inducted into the Grammy Hall of Fame in 2016, this song also landed number 67 on Rolling Stone’s all-time 500 greatest hits.

It is also one of 500 songs that shaped and defined Rock and Roll and the American Film Institute’s  100 top cinema tunes.

Today, more than 266 million Spotify listeners stream Jailhouse Rock, proof of the King of Rock and Roll’s enduring charisma in the music world.

Nearly six decades since release, this pop-country classic with a Hawaiian vibe continues to wow the music-loving crowd.

Can’t Help Falling in Love has more than 460 million streams on Spotify, making it one of the King’s most enduring masterpieces.

Inspired by the 18th-century French love song Plaisir d’amour, this song is one of Elvis’s most successful hits.

It spent two weeks at the top of the British charts, landed second on the Billboard Hot 100, and achieved RIAA and BPI Platinum certification.

The song drew accolades from different artists, which continues today. Bob Dylan, A-Teens, UB40, and Dick Smothers are some of the hundreds of artists who recorded their versions.

Modern audiophiles may have never seen Elvis Presley perform live right before their eyes, but the King’s legend lives in these best Elvis Presley songs.

Take your pick from any of these audio masterpieces and get the chance to experience the joys of listening to one of the music kingdom’s most revered artists.