10 Best Weezer Songs of All Time 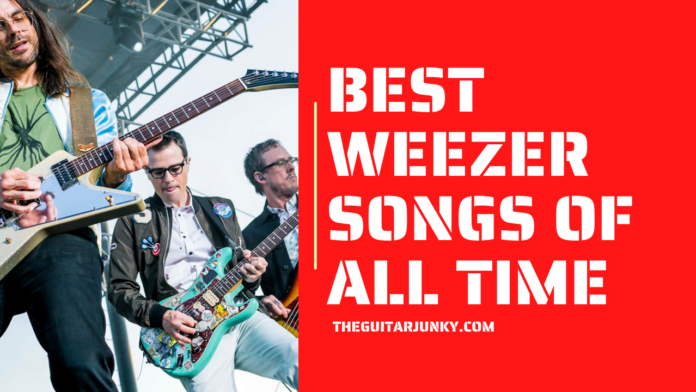 The best Weezer songs continue to generate a steady stream of followers on Spotify, despite what many people think about the quality of their music.

The alt-rock band changed the face of the rock genre of the 21st-century with their catchy melodies, explosive guitar riffs, and soul-stirring themes.

Across 15 studio albums, six EPs, and 37 singles, Weezer received nominations from the Grammys, MTV, and Teen Choice and won a few – proof of the music world’s growing appreciation of geek rock.

In this article, we will look at ten of the best Weezer songs Spotify users stream.

Get ready to rock your world.

This song is a collaboration between the electronic duo The Knocks, Weezer frontman Rivers Cuomo, and Overwhelmed creator Royal & the Serpent.

Although not a Weezer creation, Sound The Alarm showcases Cuomo’s superlative singing capabilities.

Spotify included the song in its Weezer playlist, generating close to 1.8 million streams to date.

Landing at the top of the Billboard Rock Airplay is one of Weezer’s latest creations, All My Favorite Songs.

The masterpiece strikes a surprisingly well-calibrated balance between melancholic lyrics and chipper music.

It is a radio-friendly song without giving audiophiles a feeling of sterility or corniness.

This song is the only piece where guitarist Jason Cropper had a hand in creating – writing the alt-rock’s acoustic intro.

Although the song did not do well in the charts, unlike the other tracks in the Blue album, My Name Is Jonas still earned the respect of music pundits everywhere.

Toto’s 1982 Africa was a huge hit, not to mention its social significance, at a time when people in Africa were dying of starvation.

Fast-forward some 36 years, and Weezer decided to cover this masterpiece.

The song also entered the elite Top 100 circle in Canada and Mexico while peaking at the number 26 position on Billboard’s Mainstream Top 40.

This song introduced the alt-rock band to the music-loving public, serving as the group’s debut single.

Undone features thick distortions and powerful dynamics that drive the song’s melody, which are all signature attributes of heavy metal music.

The song peaked the Billboard Alternative Airplay at the sixth position,

Not bad for a debut.

No less than Toto covered this Weezer masterpiece in 2018, proving the song’s enduring catchiness.

More than 75 million Spotify users also listen to this song, further solidifying its position as one of the best Weezer songs in the music-loving world.

Hash Pipe may have an unsavory connotation, but its staccato vocals and crunchy guitar licks make it an exceptional piece.

The song peaked at the number two spot on the Modern Rock chart, number six on the Bubbling Under Hot Singles, and number 24 on the Mainstream Rock all of Billboard.

Beverly Hills is Weezer’s most successful single ever, having landed the top spot on Billboard’s Alternative Airplay, second on the Billboard Top 40, fourth in Canada’s Rock Top 30, and fifth in Canada’s Pop Top 30.

It also drew Grammy and MTV nominations while peaking the UK Singles Chart at the ninth spot.

No, this Weezer song is not a tribute to one of Rock and Roll’s pioneers in the mid-1950s

Unfortunately, Rivers’ cheesy lines drowned out in the sea of synths and guitar riffs that flood the ears.

Perhaps it is a good thing, considering the band did not want to include the piece in their Blue album.

It is a good thing they did because this song peaked at the second spot of the Billboard Alternative Airplay and landed sixth in Canada’s Top Singles.

The song is also Gold-certified by RIAA and BPI, further cementing its place in the hearts of people in mixed-race relationships.

With its laid-back melody, Say It Ain’t So makes for an easy listening experience.

The song landed on Billboard’s Alternative Airplay at the seventh spot and nearly breached the Canadian Top 10 Rock/Alternative chart.

It is a fascinating piece to play on the guitar, with its memorizable chord progression and a slow tempo that beginner guitarists will find too friendly.

As proof, Rolling Stone considered it the 72nd all-time greatest guitar song in 2008, while Pitchfork nudged it to the Top 10 of the online music magazine’s best tracks of the 1990s.

One of Weezer’s best works, Island In The Sun transports listeners to a tropical island paradise basking in the sun without a care in the world – something we all need at this historic time.

The British Phonographic Industry certified the song as Silver and peaked at number 5 in the Rock and Metal charts of the UK.

Island In The Sun also placed 8th in Billboard’s Alternative Songs chart and number 33 on the Billboard Top 40.

The best Weezer songs may not be to your liking, but millions of Spotify users think otherwise.

While the alt-rock band’s initial offerings were loud and boisterous, they were able to tame their musical prowess to earn the respect of the music industry and contemporary audiophiles.

After all, the band is The Beach Boys personified and amped with synths and electrifying music.