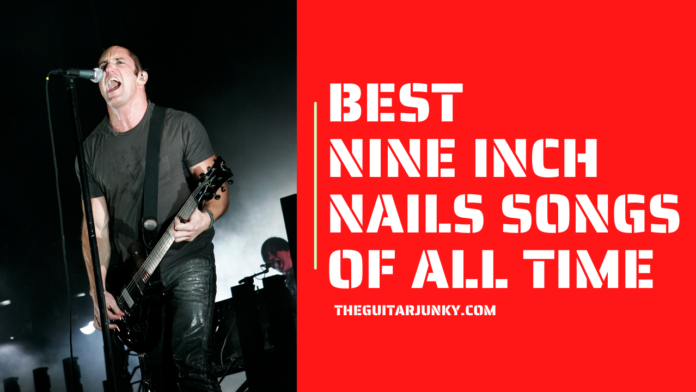 The bard was born in Cleveland in 1988, gaining a cult following with the 1989 release of their debut Pretty Hate Machine.

The band’s founder Trent Reznor has been the only lone permanent fixture in the band, but that changed when Atticus Ross joined them permanently in 2016.

With thirteen Grammy nominations and two wins under their belt and Rolling Stone naming them one of the greatest artists of all time.

Here we talk about some of the Best Nine Inch Nails Songs since the band’s conception.

ISN’T EVERYONE is a HEALTH song in collaboration with Nine Inch Nails released just this year on May 6.

Fans anticipated this collaboration since HEALTH opened for Nine Inch Nails in the summer of 2008, and they had been friends since.

In an interview in David Farrier’s Webworm, HEALTH’s vocalist Jake Duzsik mentioned the song is loosely based on the situations happening in America at that time — the pandemic, George Floyd, Trump.

Fans were delighted to hear Jake Duzsik’s voice also featured on the track, and according to him, it was solely Trent Reznor’s idea.

The song was released in 1992 as a promotional single for their EP Broken.

It is the ultimate metal anthem that boasts the metal at that age —characterized by aggression with biting and penetrating guitar attacks.

The dyad approved this song on Beavis & Butthead, where songs are occasionally featured and made fun of.

Trent Reznor once remarked that when he dies, his epitaph should read: “REZNOR: Died. Said ‘fist fuck’ and won a Grammy.”

A reference to this song.

This track, which according to album contributor Keith Hillebrandt, started as the end part of another track, but Trent Reznor wrote it as an entirely new song in itself.

We’re In This Together is a track in Nine Inch Nail’s album The Fragile, released in 1999.

As Reznor said on Rolling Stone, it is one of the more optimistic NIN tracks, a turning point on his outlook regarding his own life.

We’re In This Together is said to have been inspired by David Bowie’s Heroes, one of his most significant influences.

You might recognize We’re In This Together from The Avenger’s first teaser trailer.

It’s a bit hard to discern, but you can hear the instrumental breakdown of Nine Inch Nail’s The Perfect Drug on the tailgating scene in David Lynch’s Lost Highway.

This track was released in 1997 and disputed, seeing as Trent Reznor himself personally does not like the song, admitting that it was produced quickly.

But certainly, fans don’t seem to think so, seeing as it’s one of the most famous songs Nine Inch Nails has ever put out.

A song that is a staple on every Nine Inch Nail’s concert line-up, topping the Billboard Modern Rock chart for a straight seven weeks.

It’s a meditation about business, consumerism, and artistic freedom.

It also is hailed as one of the fan-favorites with its genre-jumping style and synth-beats, a cross between new wave, dance, punk, among others.

Every Day Is Exactly the Same is from Nine Inch Nail’s album With Teeth.

Two rockstars are collaborating on a track.

This song was featured in the film Wanted, starring Angelina Jolie — one of the most recognizable songs in the movie.

This song is so iconic that a Charlie Booker of Netflix’s dystopian drama Black Mirror remixed it — with Trent Reznor’s approval, for an episode called “Rachel, Jack, and Ashlee Too.”

Head Like a Hole is probably the most recognizable Nine Inch Nails song, cementing the band to prominence as one of the tastemakers of 90’s rock music.

It was considered a youth anthem to the tumultuous times of the 90s and still deeply resonating to now.

Another fan’s favorite with deeply emotional lyrics touching on issues about depression and self-harm, Trent Reznor, once remarked that the whole band was crying when they made it as it was too intense.

It almost got cut from the album.

This song was nominated for Best Rock Song in 1996 has been covered by artists with the likes of Leona Lewis and the legendary Johnny Cash.

Johnny Cash’s cover of Hurt was the last recorded music of the artist before he died seven months later.

Trent Reznor was so moved by the cover going to remarked that it was not his song anymore.

After years of profoundly personal album releases, Nine Inch Nails has never been more political with the single The Hand That Feeds.

A track included in the band’s fourth album, White Teeth, released in 2005.

This track is the highest topping song of Nine Inch Nails to date, staying at number one for five weeks.

It was also nominated for another Grammy in the Best Hard Rock Performance category in 2006.

Nine Inch Nails was supposed to perform this song on MTV Awards in 2005 but pulled out at the last minute due to some differences.

The most quotable and popular Nine Inch Nails song, Closer, is from the band’s second album, The Downward Spiral, released in 1994.

The track gets better and better the longer you listen to it, from the visceral first few beats progressing to sexy synth sounds, heavy guitar riffs, and Trent Reznor’s voice.

Nine Inch Nails recently got inducted in the Rock and Roll Hall of Fame last year, and seeing the band’s repertoire; there’s no denying that it’s about time.