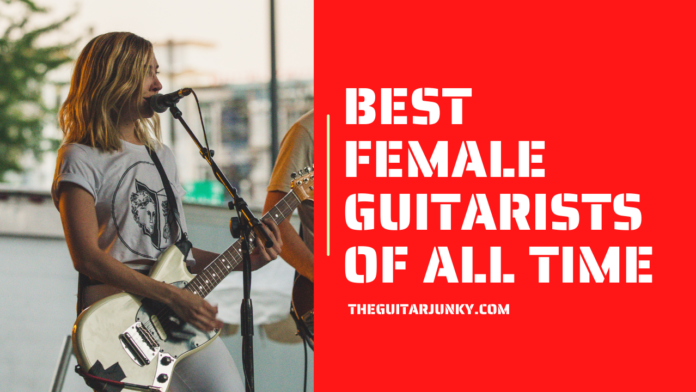 Most people will never believe that guitar playing is not just for cock-rock grandstanding and phallic fretwork.

Female guitarists can produce equally electrifying and soul-reaching music that bombard the senses and stir emotions.

Check out our list of the 15 best female guitarists of all time and discover that guitar-playing is for everyone.

The world would not know rock and roll if not for the pioneering efforts of Rosetta Nubin, known to her die-hard fans as Sister Rosetta Tharpe. She pioneered heavy distortions in her axe that presaged electric blues.

Known as the Godmother of Rock and Roll, Tharpe was the role model of many rock-and-roll legends, including Elvis Presley, Chuck Berry, and Johnny Cash.

If you consider yourself a bassist, the Carter scratch or thumb brush is not alien to you. This fingerstyle focuses on the bass strings of a standard guitar, giving your song a distinct deep tone that moves the soul.

You can thank Mother Maybelle Carter for this lick, preferring to play the guitar’s three lower notes for melody and the trebles for rhythm.

Born June 3, 1897 as Lizzie Douglas, Memphis Minnie is one of the world’s all-time greatest female guitarists. With more than 200 songs under her name, Minnie mesmerized the Blues-loving crowd of the 1920s to the 1940s.

Elizabeth Cotten developed the alternating bass style of fingerpicking. This technique has its origins from the usual all-finger downstrokes of banjo playing.

A lefty, Cotten had to play the guitar upside down. This odd position required Cotten to play the melody with her thumb and the bass lines with her other fingers. Try playing your guitar in this position, and you will see how phenomenal a guitarist she is.

This Illinois native is famous for her phenomenal fingerpicking skills. You may know her for her custom-made 21-string Doolin harp guitar that combines steel and nylon strings.

Anderson prefers the nylon over the steel, though. She plays across multiple genres, including classical, bluegrass, pop, flamenco, and folk. Of, before we forget, she is also the very first female guitarist to bag the National Fingerpicking Guitar Championship.

With nine Grammy Awards under her belt, Rock and Roll Hall of Famer Joni Mitchell is the quintessential female guitarist worth emulating. Music experts agree Mitchell is the most influential and most important female recording artist the late 20th-century has ever seen.

Whoever said that heavy metal is only for testosterone-filled male bands did not know Lita Rossana Ford. London-born Ford blazed the trail reserved for outrageous male guitarists in their bizarre costumes and equally weird hairdos.

Her sensational riffs and electrifying hooks can glue audiophiles to their seats. While Ford does not have any Grammys to her name, you can bet her glam metal creations deserve admiration.

If not writing songs and playing the guitar, Jennifer Batten would be in her shop creating steampunk art and fused and stained glass art. This New Yorker played the lead and rhythm on the King of Pop’s Bad, Dangerous, and HIStory world tours, mesmerizing the crowd with her guitar artistry.

People say the guitar is not as versatile as the piano. Nancy Wilson begs to disagree. Her phenomenal axe-playing skills continue to electrify audiophiles, whether it is folk-rock classics she is slaying or hard rock pieces.

A Rock and Roll Hall of Famer, Wilson popularized the blending of classical guitar styles and flamenco elements with hard rock. That is why Gibson ranked her the world’s all-time 8th greatest female guitarist.

Brazilian Badi Assad plays the guitar with imaginative virtuosity. She can move her fingerpicking from vigorous propulsion to a gauzy delicacy, perfect for lovers of worldbeat and jazz music.

She taps ethereal chords while adding her soothing baby talk to any music she creates. This guitarist is someone worthy of emulation.

Raitt’s command of the guitar allows her to bend and twist music to hit straight into the heart as no other artist can.

Multi-awarded Sharon Isbin serves as the perfect role model for aspiring female guitarists. She has six Grammys and nine other major awards worldwide.

While most female guitarists find passion in blues, rock, and jazz, Isbin prefers classical music above anything else. The sounds she produces are otherworldly, which is not surprising because she already performed with more than 200 orchestras globally.

A jazz guitarist, Emily Remler started her music adventures listening to Jimi Hendrix songs at age ten. In her 20s, she got a taste of the wonders of jazz courtesy of Charlie Christian, Pat Martino, Wes Montgomery, and Joe Pass.

You have got to admire how her fingers dance on the fretboard as she plays Blues for Herb.

Yvette Young may only be 29 years old, but she is taking the guitar world by storm. This California girl plays aggressive electrics for progressive rock, art rock, and math rock genres.

What will blow people’s minds is that Young’s guitar playing prowess comes from her highly acute sense of hearing. She is one of the rising stars that use polyphony in playing the guitar.

Dubbed the music world’s First Lady of the Guitar, Liona Maria Carolynne Boyd does not only play new-age and classical music on a 6-string. She also has stunning looks and a magnetic personality that further adds to her charm.

With 26 studio albums under her name, Boyd continues to mesmerize her followers with her magical guitar-playing.

These 15 most famous female guitarists of all time show you guitar playing is for everyone.

If these sassy, groovy, and soulful female string players can deliver enchanting music to the world, so could you.