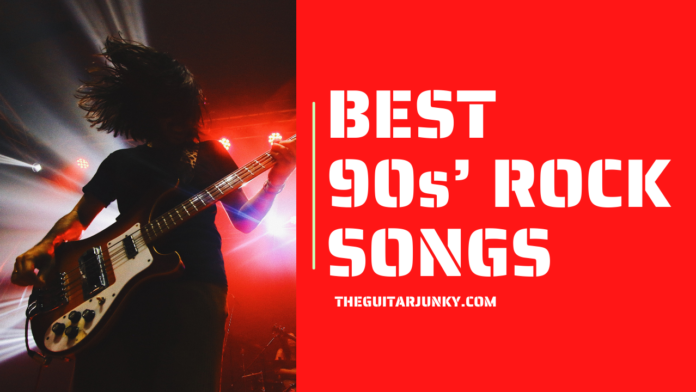 The best ‘90s rock songs are a lesson in music history, defining the genre’s splintering into subgenres the rock legends of the mid-20th-century could not have possibly imagined.

In the decades running up to the nineties, the rock arena was clean and pure, except for a few breakaway acts that sowed the seeds of alternative rock.

Everything is all good and well.

After all, the more variety the music industry has to offer, the more choices audiophiles have.

While there are thousands of rock songs recorded in the ‘90s, only a distinct few managed to earn the respect of music pundits and contemporary audiophiles alike.

In this article, we will look at ten of the best ‘90s rock songs.

These rock anthems continue to enjoy substantial exposure on streaming platforms up to this day.

Rolling Stone named Bitter Sweet Symphony as 1997’s Single of the Year, proof that Britpop music has a place in the American-dominated rock scene.

It also earned a Grammy nomination in 1999 and the MTV Video Music Awards the year before.

The musical piece is characteristic of Britpop music with its lighter and brighter alternative rock elements.

Hearing it the first time is like listening to The Rolling Stones, the Beatles, the Zombies, and other member bands of the 1960s’ British Invasion.

Fresh from the success of Smells Like Teen Spirit comes another Nirvana classic meant to cement grunge rock deeper into the mainstream music scene.

With its upbeat and danceable tune, Come As You Are peaked at the number three position on Billboard’s Mainstream Rock and Alternative Airplay Charts.

The song is also certified Platinum in Australia, the UK, and Italy, while snagging Gold in France.

It also snagged the second top slot in Canada’s Alternative 30.

The staccato guitar riffs and Vedder’s rubbed-raw enunciation of the lyrics make this piece an excellent listening experience for the contemporary rock fan.

Wonderwall has a brighter and catchier melody and lyrics than American-made alternative rock pieces.

It earned the respect of audiophiles across the Atlantic, topping the Billboard Alternative Airplay Chart, fifth on the Adult Alternative Songs, sixth on the Cash Box Top 100, and ninth on the Mainstream Rock Charts.

The song performed exceptionally in Australia, the UK, and Italy, where it earned 8x, 5x, and 3x Platinum, respectively.

Rage Against The Machine made their entrance known with the phenomenal alternative metal song, Killing In The Name.

While the American band did not do well in its native land, RATM performed exceptionally overseas, especially in the UK where it snagged the 25th spot on the UK Singles Chart.

Many people do not realize that RHCP’s most underrated song, Under The Bridge, is the group’s most commercially successful.

It has a slow tempo that makes it sound like a classic slow rock piece, although music experts classify it as alternative rock.

Under The Bridge served as RHCP’s entry pass to the mainstream music scene, landing at the second spot of the Billboard Mainstream Rock Chart and topping the charts in five other countries.

Most rock songs rely on the lead guitar to drive the piece, except Enter Sandman.

As James Hetfield begins belting his vocals with Kirk Hammett on the lead, you have a song that is as iconic as any other rock legend.

A Platinum-certified hit in the US, UK, Italy, and Australia, Enter Sandman remains one of Metallica’s most successful recordings.

Zombie is one of the most iconic alternative rock songs of the 1990s, creating a horde of dance-crazed followers every time they hear the enthralling Zombie hook.

While this musical masterpiece is a protest song, no one is protesting about its catchy melody and upbeat rhythm.

It may have been the subject of censure in a few countries, but there is no stopping Zombie from bagging Platinum certifications from five countries.

The first note of this grunge rock song is enough to let the world know why Kurt Cobain, Dave Grohl, and Krist Novoselic are the perfect bandmates of one of the planet’s most successful music groups.

The song has a heart-thumping rhythm, catchy lyrics, and a driving drumbeat, entrancing listeners to bang their heads and sway their bodies from start to finish.

It also bagged the number one spot in Belgium, France, New Zealand, and Spain.

Mike McCready’s driving guitar riff is the perfect introduction to this Pearl Jam classic, earning the nod of Guitar World’s 100 most phenomenal guitar solos at the 44th position.

It peaked the Billboard Mainstream Rock Chart at the 16th slot and 18th on the Alternative Airplay while performing exceptionally in Australia, New Zealand, Belgium, the Netherlands, Ireland, and a dozen more countries.

Despite being an arena rock, Alive manages to tame the beast with its less grandiose play and without undermining its stadium-ready chorus.

Listening to the best ‘90s rock songs is a different experience from enjoying the music of the Beatles, The Rolling Stones, The Beach Boys, and The Who.

While not everyone may like these songs, they helped define the music industry in ways far beyond the imagination of the rock pioneers and legends.