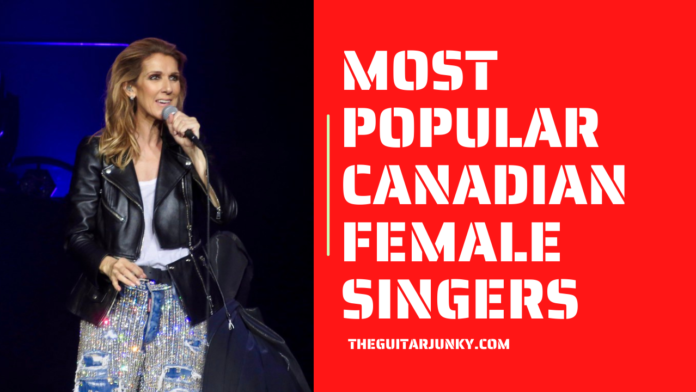 Canada is a country full of talent; in the music industry, it is known to be the home of some of the most prominent talents that the world admires.

Indeed, Canadian female singers are packed with talent and passion for singing and performing arts.

Some may be new; others may be seasoned.

But nevertheless, all of them deserve the applause and admiration of their fans.

In the following list, we’re featuring the most popular Canadian female singers, who we know maybe your favorite, too.

Born in Charlemagne, Canada, she’s a world-renowned singer with a powerful voice.

She’s also one of the best-selling artists in the world, and also an influential artist that even other great singers like Ariana Grande, Katy Perry, Jennifer Hudson, Rihanna, and Cristina Aguilera look up to.

Dion inspires these popular singers to do better in their craft.

She’s also one of the most awarded singers in history.

In fact, she’s one of the best-selling music artists of all time, having sold over 200 million records worldwide.

Young and seasoned artists look up to her and her achievements, including being considered as one of the most successful pop vocalists.

Dion has also won 5 different Grammys, including Record of the Year and Album of the Year.

She’s also named ‘Queen of Adult Contemporary’ (Billboard) for achieving the most #1 song for a female artist (radio format).

Dion was also recognized for selling more than 50 million albums in Europe in 2003 (International Federation of the Phonographic Industry).

Born in Windsor, Shania Twain, who is regarded as the ‘Queen of Country Pop,’ is another bestselling female singer in country music, and in fact, she’s sold over 100 million records globally.

Not to mention, Twain is also one of the best-selling artists in the music industry and is considered the ‘13th Greatest Music Video Female Solo Artist, according to Billboard.

With her exceptional talent, she also bagged five Grammys, 27 BMI Songwriter Awards, a World Music Award, and so many more.

Adding to these, Twain is also inducted to the ‘Canadian Music Hall of Fame.’

She also has prestigious stars on both ‘Hollywood Walk of Fame’ and ‘Canada’s Walk of Fame.’

As part of her growing list of achievements, Twain also received three consecutive albums to be RIAA diamond certified.

And finally, she’s also ranked at 6th place as best selling female artist in the US.

Singer-songwriter from Belleville, Avril Lavigne started her singing career early, and at age 14, she performed with Shania Twain as well as signed by Arista Records at age 16 for a 2-album recording contract.

She’s one of the most successful female Canadian singers whose debut album ‘Let Go’ was a massive success, and that earned her a teen idol status. She’s also received Grammy nominations.

Lavigne is so influential that she also paved the way for the introduction of new artists in the alternative rock and pop-punk scene.

Oftentimes, Lavigne is also considered the best representative for pop-punk music and is regarded by fans as one of the finest singers that can best serve as an icon of rock music in the 2000s.

Throughout her career, she’s also been compared to 90s icons, singers, and songwriters Courtney Love, Alanis Morissette, and Liz Phair.

But aside from her success as a musician, Lavigne is also a philanthropist, who has been taking part in charity works, such as Amnesty International, Make Some Noise, and Make-A-Wish Foundation.

Born on July 11, 1996, Cara, who is a singer and songwriter, has been known for her hits, such as Scars to Your Beautiful and Here, both Billboard-charting hits.

She’s a Grammy-winning artist that has first become successful on YouTube with her acoustic covers.

Peaking at #9 Billboard 200 and #8 Canadian Albums Chart is ‘Know-It-All’ her debut studio album, with her single Scars to Your Beautiful reaching #8 Billboard Hot 100 (2016).

Continuing her success was in 2017 when ‘Stay,’ her single in collaboration with Zedd, a producer, and DJ, received 7-platinum recognition in Canada.

She also received four Grammy nominations and won ‘Best New Artist’ in 2018 – and the first-ever Canadian to win this recognition.

Born in Ottawa, Alanis Morisette is undoubtedly one of the most successful Canadian singers that have penetrated the music scene and have been known in many parts of the world.

The Canadian-American actress, singer, and songwriter is recognized for her unique singing style and mezzo-soprano voice.

The Rolling Stone also named her ‘Queen of Alt-Rock Angst.’

She has a long list of achievements, such as seven Grammys, 13 Juno Awards, as well as hit albums, such as ‘Jagged Little Pill’ that were regarded as 500 Greatest Albums of All Time (Rolling Stone).

Morissette’s Jagged Little Pill, is her most critically acclaimed work, selling over 33 million copies in the world.

It was even turned into a rock musical in 2017, and it has received 15 different nominations at the Tony Award, such as ‘Best Musical.’

Nevertheless, Morissette is one of the bestselling Canadian singers selling over 75 million records globally, and also one of the most remembered for her unique singing style and voice.

Jepsen was born in Mission, Canada and is a known singer-songwriter and actress, who has been active since 2007.

Her breakthrough was when ‘Call Me Maybe’ became popular in the mainstream.

This single was also the ‘best-selling single of the same year placing #1 in 18 countries (2012).

At an early age, Jepsen has displayed interest in music, and in fact, she’s pursued musical theatre (Canadian College of Performing Arts).

Because of her rising popularity, Jepsen signed with School Boy Records and Interscope Records.

‘Kiss,’ her 2nd album, was released, marking her shift into mainstream pop music.

It also gained her a fair commercial success, making it to the top 10 in the United States and Canada.

She’s also an actress that played the title role in ‘Cinderella’ in her Broadway stage debut in 2014.

She then released ‘Emotion’, her 3rd studio album, which is recognized for a combination of synth-pop with indie sensibilities and dance-pop.

A songwriter and Canadian singer from Nova Scotia, Ria Mae’s EP ‘Between the Bad’ was released in 2009.

She became a finalist in the Mountain Stage NewSong Contest two years later.

“Clothes Off,” another of her singles, was released with Sony Music Canada in 2015.

It’s produced by Classified, a Juno award-winning hip hop producer, and it was nominated at the Juno Awards (2016) for Single of the Year.’

She’s a Canadian-based artist of Filipino descent and has been a singer, songwriter, dancer, and actress.

Then, she released ‘Hungover,’ a follow-up single with a music video that’s released on October 4.

She’s the 1st Canadian singer that reached #1 on the US Charts and also to earn ‘Gold’ record for Snowbird, one of her signature songs in 1970.

Her albums sold over 55 million copies during her four-decade-long music career.

She’s often regarded as one of the female singers/artists that paved the way for other Canadian artists, such as Shania Twain and none other than Celine Dion.

She’s a Canadian-based artist who’s a singer-songwriter that started singing songs on Vine in 2013 in Vine.

She released ‘The Intro,’ her premiere EP in November 2015.

Later in 2017, Ruth B released ‘Safe Heaven,’ her debut album, with her single ‘Lost Boy’ garnering over 300 million streams (Spotify).

She performed ‘Lost Boy’ in the 2017 Juno Music Awards, in which she’s also drafted for “Songwriter of the Year,” “Juno Fan Choice Award,” and won “Breakthrough Artist of the Year.”

There you have the most popular female Canadian singers that have made a huge difference in the music industry in general and have inspired fans all over the world.

Who among these female Canadian singers do you think deserves to be on the top spot? Tell us in the comments. And if you liked this article, share it on Facebook today!