10 Best Emerson, Lake, and Palmer Songs of All Time 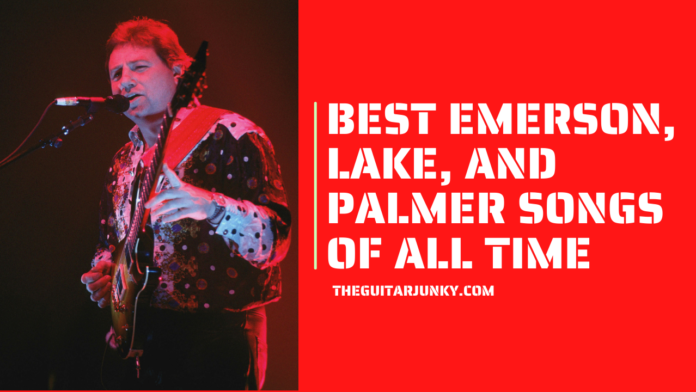 The art-rock scene of the late 1960s to the mid-1970s will never be complete without the best Emerson, Lake, and Palmer songs.

While many music fans equate art-rock with progressive rock, its classical influences make it a distinct subgenre of rock music.

Among the art-rock performers of the 1970s, very few can beat Emerson, Lake, and Palmer (ELP).

The trio’s music made the synthesizer keyboard front and center, creating an innovative and eclectic musical style that blends electronic, blues, jazz, and classical elements.

Across 24 live albums, a dozen compilation albums, 17 singles, and nine studio albums, ELP is one of the UK’s most successful gifts to the music-loving world.

In this article, we will relive ten of the best ELP songs that enjoy substantial Spotify streams.

Following The Endless Enigma, Fugue is one of ELP’s most creative masterpieces despite lasting less than two minutes.

It is an excellent progressive rock piece that reminds listeners of the works of Bach and Mozart, but with a characteristic modern element.

The music has a fast tempo that slows down towards the end, perfect for perking up quiet afternoons.

The second track of ELP’s debut album, Take A Pebble introduces listeners to the brand of music and playing style of the hottest British progressive art-rock band at the time.

Starting as a soft ballad, Emerson showcases his piano mastery by using a plectrum to strum the grand piano strings.

With almost ten minutes of classical music-infused blues-rock filling the ears, Fanfare For The Common Man is one of progressive rock’s most epic songs.

This song is an ELP favorite, combining it with their other masterpieces in live performances to give the audience an experience they never had.

Trilogy is one of ELP’s most successful studio albums that earned the fifth spot on the Billboard 200 and the second position in the UK.

The first track on the B-side, Trilogy, also performed exceptionally on the charts.

It has almost nine minutes of play, showcasing the trio’s crafty musicianship and now-iconic musical arrangements.

Beginner guitarists love to learn the fingerstyle of this 21st-century ELP song.

Not only is it an exceptional guitar piece, but C’est La Vie is also a marvelous song to listen to, particularly for someone who never asks anything back for love.

Call it cheesy, but many contemporary audiophiles do not seem to mind.

The live version is breathtaking, complete with Greg’s accordion that transports listeners to a magical land.

Brain Salad Surgery is one of ELP’s most commanding albums, filled with aggressive rock compositions.

Adding Still… You Turn Me On to the album balances everything.

It also showcased Emerson’s atmosphere and Lake’s songcraft, earning the nod of Rolling Stone as an essential listening experience for any ELP fan.

Music industry experts showered Still… You Turn Me On with accolades, citing its beautiful and poetic composition as the cornerstones in ELP’s musicianship.

The song strikes a balance between ingenious songcraft and a beautiful melody, complete with layered riffs and romantic lyrics.

Unfortunately, not everyone has the patience to listen to a ten-minute harmonic battle cry.

That is why ELP created a three-minute version, which they released as a single.

The Single Edit peaked the UK Singles Chart at the second top spot.

Progressive rock’s most epic song, Karn Evil 9, sounds foreboding, but it is one of LEP’s most ambitious works.

It is a staggeringly complex masterpiece divided into three impressions lasting almost half an hour.

The song is like a symphony detailing man’s adventures and relationships with machines.

The 1st Impression’s Part 2 talks about the old world’s decadence, a stark opposite of Part 1’s bleak world message.

Karn Evil 9 is also a mainstay in the marketing arsenal of renowned brands.

Dr. Pepper, Hard Rock Park, and Stockton Thunder are some organizations that used the song in their projects.

Nobody would ever guess Lake wrote this popular 1970s folk-rock song when he was only 12.

On top of that, the trio improvised the song’s arrangement, incorporating a Moog synthesizer solo.

While the song started with a straightforward acoustic guitar chord pattern and progression, LEP threw in bass overdubs, harmony vocals, triple-tracked acoustic guitars, and a sleazy electric guitar to transform the piece.

This LEP classic is a testament to the keyboard’s versatility, putting the guitars in the background.

Remastered for the modern progressive rock fan, From The Beginning is one of ELP’s most successful songs to cross the Atlantic.

It landed on Billboard’s Hot 100 chart’s 39th position while also snagging the 40th on Cash Box’s Top Singles and 34th on the Canadian Top Singles.

The song is a cacophony of instruments, harmonizing the congas, electric bass guitar, and tympani mallets.

What fascinates audiophiles the most is this rock music has the acoustic guitar driving the song, a rare feature in the mainstream rock genre.

The synthesizer solo at the outro is also a unique element that surprises many music-loving fans.

The best Emerson, Lake, and Palmer songs defined art-rock and progressive rock to differentiate it from grunge rock that was beginning to take the world by storm.

The trio offered the music-loving world phenomenal hits after successful hits, fusing elements from different music genres and arranging them into compositions largely unfamiliar at the time.