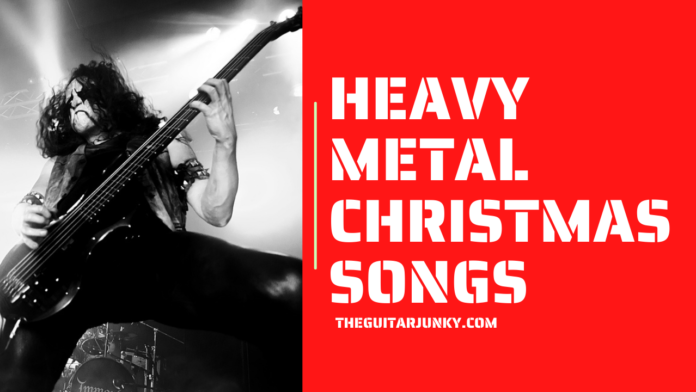 You know it’s the holidays when malls and shopping centers start blasting out the Wham!, then Mariah Carey, and most recently, every Justin Bieber or Ariana Grande cover of every Christmas song.

Not everybody is into that.

When you’re bombarded with the usuals, it’s hard to find the rare gems.

Luckily for the hipsters, the alternatives, and the heavy metal fans, there’s no shortage of genre-jumping Christmas songs on records right now.

Here, we list ten of our picks of heavy metal Christmas songs you didn’t know to exist until now.

King Diamond- No Presents for Christmas

No Presents for Christmas is a song by Danish heavy metal band, King Diamond.

Released on Christmas Day in 1985, the dark prince of heavy metal delivered a bleak but catchy tale.

This song follows Santa, who can’t find anyone to drag his sleigh around the world, ultimately leaving gifts worldwide undelivered and undistributed.

Starting with Christmas bell sounds before King Diamond’s nefarious laugh is heard, then you get that metal riff, double bass, and bombastic drum solo every metal fan is here for.

No Presents for Christmas is not for the faint of heart, but give it a listen, and you’d be banging your head in no time.

Hits are the song title and lyrics

A song about celebrating the holiday spirit, coupled with the fantastic guitar playing by August Burns Red, Carol of the Bells should be in your upbeat Christmas carols playlist.

August Burns Red version is featured on the promotional ad for Frank Miller’s The Spirit.

August Red Burn’s Carol of the Bells is part of their holiday album Sleddin’ Hall, A Holiday Album, released in 2012.

The metalcore band’s spin on this Christmas classic is a fan favorite, and even Disney plays a marching band version of this song around their theme parks.

Popularized by Chuck Berry, Run Rudolph Run has had so many covers, and versions made since.

It’s an upbeat, danceable song that you could bang your head in while decorating the gingerbread house.

Korn is an American heavy metal band credited for bringing the nu metal genre to the mainstream and delivering it to their Christmas carol Kidnap the Sandy Claws.

You will probably recognize this song from Tim Burton’s 1993 animated dark fantasy film The Night Before Christmas, and what better theme for Korn to cover?

Korn’s cover is part of a Disney-released 2008 album, Nightmare Revisited.

You can imagine Korn’s version of the song playing in the background perfectly while Jack Skellington tasks Lock, Shock, and Barrel to kidnap Sandy Claws in order to cancel Christmas.

Manowar released two versions of their cover of Franz Xaver Guber and Joseph Mohr’s 1818 Christmas song Silent Night, one in English and Stille Nacht in German no less.

Like every heavy metal band, Manowar is all about that buster and rage, and best believe Silent Night’s got it.

This song gradually starts quietly before giving you that blast and crescendo that will rock your world is played loudly in an arena with giant speakers.

Twisted Sister released this cover of Jimmy Boyd’s I Saw Mommy Kissing Santa Claus as a track on their 2006 Christmas album A Twisted Christmas.

It’s a pretty straightforward cover of the song that will get you right into the holiday spirit.

Play it at a holiday house party or blasting out of your headphones during holiday shopping.

If you’re a kid born in the 90s, you might be familiar with this song from the Christmas film Christmas with the Kranks.

Merry Christmas (I Don’t Want to Fight Tonight) is the last track from Ramone’s eleventh album, Brain Drain, released in 1989.

It is more whimsy than you would expect of a Ramone song with special mention from the lyrics ‘All the children are tucked in their beds, Sugar-plum fairies dancing in their heads.’

A song celebrating the holiday season and also a coaxing of peach from a lover to another lover.

A song written by the band’s guitarist Pete Townshend was released in 1969.

Christmas is a lyrical masterpiece with themes dealing with disability, religion, and a child’s future.

Tommy’s father is worried about what would become of his future, seeing as Tommy is “deaf, dumb, blind.”

Luckily we get a happy ending with Tommy becoming the next Pinball Wizard when he receives a pinball machine for Christmas.

This song was critically acclaimed, with Rolling Stone saying that the song was a prime for Pete Townshend.

A grim and somber heavy metal song dealing with the subject of grief amidst overtone and rhythm of Carol of the Bells and God Rest Ye Merry Christmas.

Grief is a universal feeling, and Type O Negative put into the song the melancholy this holiday brings to some people almost perfectly.

The first metal song on our list is by American rock band Blink-182 called I Won’t Be Home for Christmas.

Originally recorded as a radio jingle in the late nineties but re-released as a single in the early 2000s.

The song is Blink-182 at its best, with Blink-182’s original drummer Scott Raynor still on the band.

The song is about a man losing it and snapping at a group of Christmas carolers, thus deeming him unable to come home for Christmas Eve as he would be spending it in a jail cell.

This song landed on number 1 on the Canadian Singles Chart both in 2001 and again in 2002.