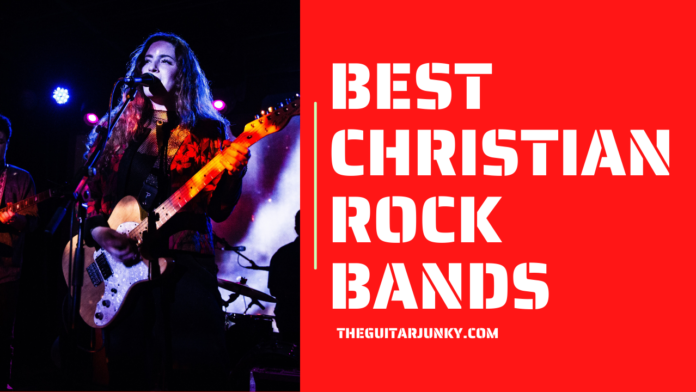 Christian music allows us to express our heart’s content to worship God and show our deepest love for Him.

It is an intangible symbol of honoring the Almighty God.

In segments of praise and worship during Sunday service, Christian bands bring hope and truth to those who listen.

Christian bands and Christian music are centered on generating and delivering powerful messages of God during religious production and gatherings.

To this day, this group of artists is drawn into placing combinations of rock, alternative rock, and pop-rock in their contemporary outputs released in either form of albums or on performances.

Here is a list of the Top 10 best Christian rock bands of all time.

Let us know which band sounds familiar and that you personally listen to or whose songs you got on your playlist.

Casting Crowns is one of the best Christian rock bands, led by a youth pastor named Mark Hall.

Hall and his band have a pop-rock musical style and are recognized for their hard-hitting but pious tunes, uplifting melodies, and ability to appeal to both secular and religious listeners.

The group’s studio albums have sold over ten million copies, and their singles Lifesong, Until the Whole World Hears, and Courageous have topped Christian radio charts.

To this day, the pop-rock band’s most recent release is Scars in Heaven, the first album on Hall’s experience helping people overcome grief.

Michael Tait, from Memphis, Tennessee, is a contemporary Christian music artist, frontman, and DC talk member whose band is named after his late father.

The rock band’s desire, as stated by Michael, is to allow people to witness the gospel of God, and that the hollow inside them can only be filled by Christ’s presence.

As a result of the popularity and success of their debut album, Empty, released in 2001, Tait was able to perform live all over the world and in other nations.

After the studio album of Thousand Foot Krutch “That’s What People Do” allowed them to perform numerous events, the band began spreading their fame over the globe.

The album of Thousand Foot Krutch “Our Lady Peace, Finger Eleven” was the first to ascend the Billboard 200 when the band shifted its focus to rock sound and even stronger rock songs, with passion and anger amplified twice.

Prior to that time, Thousand Foot Krutch had remained at the top of the charts.

Thousand Foot Krutch is really a Christian rock band which songs you can add to your playlist.

Kutless is a hard rock band from Portland, Oregon, that has been hailed as one of the finest alternative rock bands of the century.

The members of such a band (Nathan Stuart, Kyle Mitchell, Ryan Shrout, and John Mical Sumrall) were college classmates who got together to play music and stage basement shows.

Their music and tours, such as their Extreme Days Tours, are held to provide privileges and benefits to abused women and children, as well as cancer survivors.

Since 2015, Kutless’ output has topped the Billboard Christian Albums list.

After a two-year break, they have returned with their tenth studio album, Alpha/Omega.

Newsboys is one of the most enduring Christian rock bands of all time, with a moniker that dates back to the 1990s.

During the popular pop period of the 2000s, the band experimented with min-mixing rock, pop, and praise genre.

Regardless of the band’s initial backlash for using religious tropes in their songs, Newsboys subsequently reaped the benefits of the music alternative movement.

During the mid-90s, the Christian rock band had a lot of number one hits on Christian records and charts, and they finally accumulated the largest number of media channels.

Newsboys reunited for a retrospective tour two years after the release of their pop-oriented album Love Riot in 2016.

Third Day was founded by a vocalist and acoustic guitarist who infused the band’s core with Southern rock.

After simultaneous album launches that created a passionate fan following, the Christian hard rock band was nominated in the Favorite Contemporary Inspiration Artist category in 1999.

Despite the loss of one of their rock and roll bases, Third Day chose to struggle and in 2015 began releasing faith-based content while incorporating Southern rock into their music.

In early 2018, Third Day announced their breakup with a farewell tour, which resulted in the creation of another 20 rock gigs.

Skillet is a Christian alternative band that demonstrates music that has a mix between metal and praise music.

This resulted in the group’s continued ascent in the charts and increased net success.

With Victorious, released in 2019, Skillet gained hegemony in the Christian Albums list, owing to their varied fan base and propulsive and riff-heavy productions.

After the release of Hey You, I Love Your Soul, Invincible, and a three-track addition to Ardent Worship: Skillet Live, the trio reformed with new lineup band members, including Cooper’s wife as the lead vocalist.

Skillet’s secular fans are anticipating the release of Dominion, a new single due out in 2022 after the band’s content “Surviving the Game” topped the Christian music list in 2021.

The band’s album End of Silence earned them a Grammy nomination in 2006, propelling them to the top of the Christian Top Album Chart the same year.

The band succeeded most in displaying modern Christian covers to the land of Pennsylvania, with youth groups as target listeners, garnering excitement and praise from audiences.

Their hard-edged rock techniques were frequently related to personal concerns, which explains the band’s name RED, embodies aspects of sorrow, passion, and redemption and symbolizes the blood of Christ.

According to the rock band members, elements like Chevelle, Muse, and Linkin Park have been incorporated into their projected image and outputs.

The rock band was previously and continues to be recognized for their energizing live concerts that most effectively caught and connected adolescents, making them as one of the greatest Christian rock community.

The Fundamentals of Elements of Southtown, a nu-metal/rap-rock album by POD (Payable on Death), helped them reach their pinnacle in the early 1990s.

The content was widely spread to the media, resulting in MTV acclaim and a platinum award for the album.

With consistent popularity throughout the 1990s, the band has never wavered in its dedication to hardcore, faith-based music.

In addition, the top Christian rock band won awards for Best Hard Rock or Metal Group, Song of the Year for “Rock the Party (Off the Hook),” and Album of the Year at the San Diego Music Awards in 1999, owing to renowned outputs that encouraged Atlantic Records to take credit for the band’s ethics, music, and signing them.

As part of the alternative rock band trend, Jars of Clay emerged into the mainstream.

The band’s popularity and image breakthroughs were aided by its involvement in the Christian music scene.

Jar of Clays struggled to maintain a secular following due to changes in popular preferences and the advent of other Christian-themed rock bands such as Creed and POD, but the event established them as one of the greatest Christian rock bands in a faith-based music subgenre.

Their album “Flood” was well-received by both secular and non-secular fans alike.

As a result, it was regarded as their greatest achievement in history.

It helped the band extend their sales after exceeding the double-platinum mark, which is a rare feat for a Christian band.

The band’s significant church hymns and spiritual materials with golden meanings have continued to be a big crossover smash on pop charts, mainstream, and current rock music channels until this day.

There you have the best Christian rock bands to watch out for if you liked their style of music. Definitely, there are more of them out there, but those in the list are also great in their genre and chosen music style.