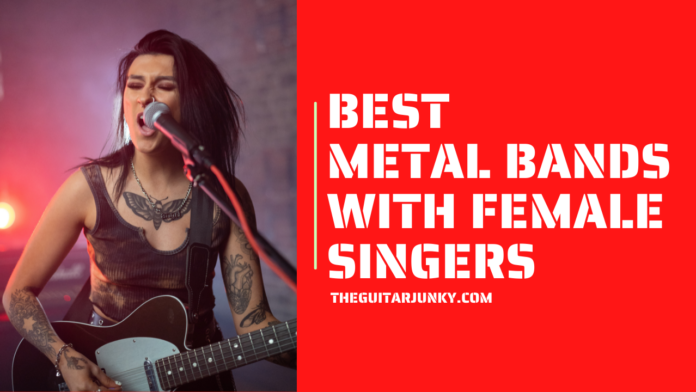 Metal bands bring a different kind of flavor to the music industry.

Their music is intense and distinctively theirs.

But in today’s post, we’re featuring not just metal bands but those that added a feminine touch to their groups with their lead female singer.

You’d say that these girls rock!

So, if you’re ready, let’s begin with our top picks for the most famous metal bands with female leads.

The band emerged from Ontario, Canada when Fallon Bowman and Mercedes Lander met in one of their high school gym classes.

Morgan joined the band as their vocalist just a few weeks after the duo jammed.

They had continued success until 2017 when Trish Doan, their bassist, died.

Morgan later expressed concern about the future of the band after losing Trish Doan.

Even though the band is world-renowned as one of the most successful all-female bands of all time, Lander (drummer) said in an MTV news interview that she wants the band to be recognized as a metal band and for people not to make an exception just because they’re all-female.

She added that they offer the same kind of metal rock music like their male counterparts do except they don’t have the same genitals.

Vixen, which was initially formed in Minnesota, is recognized by fans and critics as one of the earliest female bands to make it to the limelight within the metal scene of Los Angeles.

Even if the band was formed in 1980, it was only in 1987 when its famous lineup composed of Share Pedersen (bassist), Roxy Petrucci (drummer), and of course Janet Gardner (vocals) came to be.

In 1988, the band released their debut studio album featuring their most memorable hit “Edge of a Broken Heart,” and then the next year, they became a big thing that they had their tour.

They were also supported by big names on their tours, and some of these include Scorpions, Ozzy Osbourne, and Bon Jovi.

“Rev It Up,” their second album led them to another massive tour in 1990, and this together with Kiss and Deep Purple.

However, all good things must come to an end, and just a year post-tour, the group disbanded.

But in 1997, the group had a mini-reunion through Tangerine, their third studio album in 1998; however, they replaced Pedersen and Kuehnemund with Rana Ross and Gina Stile.

But again, they split after its release, and the rest is history.

Who doesn’t know this gothic metal band and their great vocalist Amy Lee?

They’re praised and considered as one of the best gothic metal bands of all time.

Since 1995, they’ve become a staple right after their formation in Arkansas.

The band, which name means disappearance or fading away, is formed by Ben Moody, former guitarist, and Amy Lee (vocalist).

This happened right after Lee played “I’d do anything for love” on the piano at a youth camp and Moody heard it.

The band was so popular that the singles “Bring me to life” and “My immortal” got audience acclaim. Each of them peaked at #5 and #7 on the Billboard Hot 100.

Undoubtedly, Evanescence is one of the most remarkable metal bands with female singers.

This hard rock group, which was formed and composed of siblings Lzzy and Arejay Hale, is one of those bands that have been able to penetrate the scene and earn global fame despite only having a total of three albums to their name.

They’re most known for touring and creating great music.

The lead vocals, Lzzy, possesses a monster voice that you’d be able to recognize when you listen to songs, such as “I Miss the Misery, and she stands out in the industry that she had been a guest vocal together with David Draiman (Disturbed) on the song “Close My Eyes Forever,” a cover of the Ozzy Osbourne and Lita Ford song.

The band, which music is regarded as melodic death metal, gained popularity in Sweden, when Michael Amott left “Carcass.”

Initially, their band vocalist was Johan Liiva, who also led in “Black Earth,” their debut studio album., featuring their 1st single “Bury me an angel.”

In 2000, Liiva was replaced by Angela Gossow, but then also replaced by Alissa White-Gluz of “Agonist”, a metalcore band.

This band, which was described as the most successful metal band of mainland Europe, as described by Metal Hammer, emerged from the plan of Tuomas Holopainen to create a project that would be based on acoustic music he’d created when he was in the Finnish Army.

The band’s vocalist, Floor Jansen, is a Dutch vocal coach, singer, songwriter, and lead vocalist of the band.

However, she was first known as “After Forever’s” metal band member.

Nightwish released “Angels Fall First,” their debut studio album that they had performed live in Kitee, Finland, their hometown.

Jukka “Julius” Nevalainen joined the band right before they released their album.

He added more heavy metal elements to the style of Nightwish, which was more of an experimental style.

The band is one of the most successful in their time, and in 2000, they released “Wishmaster”, which was a huge success.

It went gold and settled at #1 in the Finnish album charts for three consecutive weeks.

This band, which was formed in 1996 in the Netherlands by Robert Westerholt and Sharon den Adel, is distinct for their gloomy and slow-moving gothic metal music.

But if you don’t know yet, they also formed “The Portal” a doomed metal band featuring Jeroen van Veen (bassist), Michiel Papenhove (guitarist), Ivar de Graaf (drummer), and Dennis Leefland (keyboardist) before the band was renamed “Within Temptation.”

In 2013, when they celebrated their 15th anniversary, they’re able to cover 15 songs in their style, including Titanium (David Guetta featuring Sia) and Blue (The Who).

Just recently, they had a teaser of their upcoming 8th studio album, even though they already released “Entertain You,” “Shed my skin,” and “The Purge” in 2020.

The Italian metal band was formed in 1994.

They’re formerly known as “Sleep of Right and Ethereal” and their music is inspired by gothic metal sound.

The group members, musically, have been writing mid-tempo songs that are distinct for their prominent guitar lines combined with contrasting vocal harmonies, which then create a detached but melodic sound.

But then, many of their songs are in the heavier, down-tuned style, which feature a unique bass line and more mixing of the guitars.

In 2012, they released “Dark Adrenaline” that has peaked at #15 (Billboard 200). Before its inception, the band had sold more than two million records.

They’ve also had international tours and been nominated for the MTV Music Award.

Shortly after Claudio Leo, Raffaele Zagaria, and Leonardo Forti, the band, through Century Media, released their self-titled EP in 1998.

They’re touring after the EP was released, so they had quick changes in completing the tour.

After the tour, the two new members became full members and have remained a part of it for most of the next two decades.

The band was founded by Mark Jansen after leaving another band After Forever.

The symphonic metal band has gothic tendencies and later has added death metal influence into their sound.

They’ve also incorporated Arabic music references and intense metal moments in some of their pieces.

A few of their songs also have djent transitions, electronic shades as well as folk metal melodies from different traditions (Celtic, Chinese, and Middle Eastern).

Due to personal differences and musical disagreements, Morten Veland left Tristania, his former band, and formed Sirenia in 2001.

The band was known for its signature style combining keyboard synthesis, melodic instrumentals as well as guitar works added with female vocals and male vocals.

Many of their songs are intense and atmospheric with melodic interludes and backgrounds and with lyrics focusing on emotion, human existence, and mental condition.

Metal rock isn’t just for male singers but for female singers, who add new touches and flavors into this kind of music.

Do you think we forgot your favorite female-fronted metal bands?

Tell us in the comments. Finally, share this post on social media to spread the word to your metal music-loving friends today!