10 Best Duet Songs of All Time 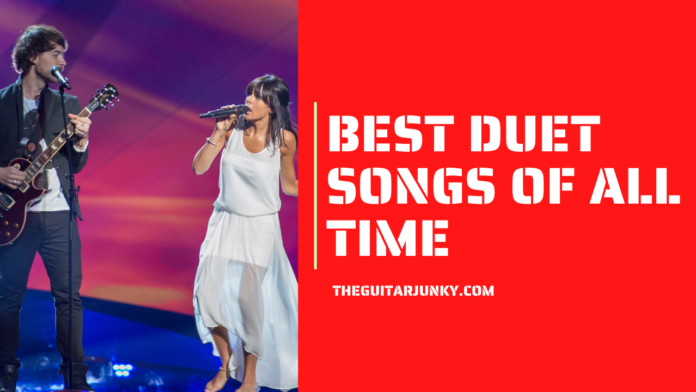 Duet songs are a wonderful classic, from 60’s top artists Marvin Gaye and Tammi Terrell to 2011 artists Gotye and Kimbra.

Not a lot of duets are well-received by critics and casual music lovers, which makes the field so lacking record-breaking songs as compared to solos and singles.

The best duet songs, however, do exist, and the proof is in how many times you can still hear them in a year or even a couple of months despite having been published decades ago.

In this article, we will be giving you the top 10 best duet songs of all time, starting from the 10th all the way to what we deemed as the best and number 1 duet song.

“Glamorous” by Fergie and Ludacris is a track featured in Fergie’s debut studio album “The Dutchess” and was produced by Polow Da Don.

Fergie sings about doing things that everyday people normally do, like grab lunch from Taco Bell, have some drive-thru, and more despite the fact that she has become renowned as a singer and celebrity, most of whom people expect to be doing fancier and classier stuff.

The album features several other famous songs by Fergie, like “Fergalicious” and “London Bridge”, and the album itself has reached success by staying as No. 2 on the US Billboard 200 for 94 weeks.

Taylor and Ed sing about how life can change so much in just a matter of seconds after meeting someone, as they can’t stop thinking about the other even after they have just exchanged simple greetings and their names.

The song alone was able to climb as No. 32 on the Billboard Hot 100 in the US, while reaching at least the top 10 in countries like Belgium, Ireland, and the United Kingdom.

The song by Elton John and Kiki Dee was written in the hopes of achieving a song similar to the collaboration between Marvin Gaye and Tammi Terrell.

“Don’t Go Breaking My Heart” basically talks about how happy Elton is with Kiki, even though they share a platonic relationship, and hopes that Kiki doesn’t leave him with a bruised and battered heart after building such a great relationship with each other.

Elton and his songwriter Bernie Taupin earned the 1976 Ivor Novello award for Best Song Musically and Lyrically, which is well deserved given that the song can still be heard on various streaming apps even in this year.

Not to be confused with Ghost Town DJ’s My Boo which started the Running Man Challenge a couple of years back, Usher and Alicia Keys make a wonderful R&B duet which was only released on a Special Edition of the 2004 album “Confessions” by Usher.

The song speaks about two lovers who still have deep-rooted feelings for one another despite having broken up for quite a long time, which is also what led the public to speculate that both R&B artists were dating at the time.

With Estelle being European and Kanye being American, they both sing about lovers meeting up with each other once and for all to get their relationship to all new heights and different places as the female character in the song wants the American Boy to take her around.

With this song, Estelle has been awarded a Grammy for “Best Rap/Sung Collaboration” and has reached No. 1 in the UK and Belgium charts.

Lucky (We Sing. We Dance. We Steal Things.)

“Lucky” by Jason Mraz and Colbie Caillat is the 3rd single from album “We Sing. We Dance. We Steal Things.”that peaked at No.3 in the US Billboard 200.

The sweet melody of the song is perfectly accompanied by even sweeter lyrics that can help anyone set such a lovely mood for a date, especially for lovers who have been together for so long that they’ve seen each other’s naked souls.

The song reached No. 48 in the Billboard Hot 100 and even won the 2010 Grammy Award for “Best Pop Collaboration with Vocals”.

“The Marshall Mathers LP” album by Eminem is, in itself, already iconic for 2000s kids, but has been made extra special with the eerie track “Stan” featuring singer Dido, and portrays Eminem reading letters from an overzealous fan.

This song is what led to the addition of the word “stan” in the Oxford Dictionary, having won “Best Song” at the MTV Europe Music Award, Video of the Year for its music video, and many more.

Being the first track on Nelly Furtado’s “Loose” album and featuring Timbaland, both artists sing about promiscuous people flirting with each other to get together in bed.

The song was Nelly Furtado’s first No. 1 single in the US Billboard Hot 100 chart, and also No. 1 in New Zealand and at least the top ten in charts across Europe.

“Ain’t No Mountain High Enough” is the first track on Marvin Gaye and Tammi Terrell’s debut album “United”, which also signified the first collaboration between both artists.

The classic song which can be heard almost anywhere 60s to 90s music is played delivers such a simple message in a very uplifting melody, which is no matter how tough the challenge may seem, nothing will stop the partners from getting to each other thanks to the love they feel.

The song was such a success that many major artists made renditions of it, artists like Diana Ross, The Supremes and the Temptations, and Ashford & Simpson after it was inducted into the Grammy Hall of Fame.

Somebody That I Used To Know (Making Mirrors, 2011)

The iconic duet by Gotye and Kimbra which sparked many rumors about Gotye remains top 1 in the best duet songs, reaching top 1 in the US, UK, Australia, and 22 other national charts, while reaching at least the top ten in 30 different countries.

The beautiful composition of the song is well-accompanied by both Gotye and Kimbra’s vocals as they sing about an ex-lover who’s chosen to completely erase any memory of the relationship despite having ended it peacefully.

Whether it be electronic, R&B, or just plain old pop music, duets will never be out of the question.

The best duet songs are those whose artists really complement each other’s voices, giving so much life and soul to the lyrics and the melody.

As more and more artists slowly come to rise with each of their own styles of singing, we are sure bound to hear some more record-breaking duets in the near future!