10 Best One Direction Songs of All Time 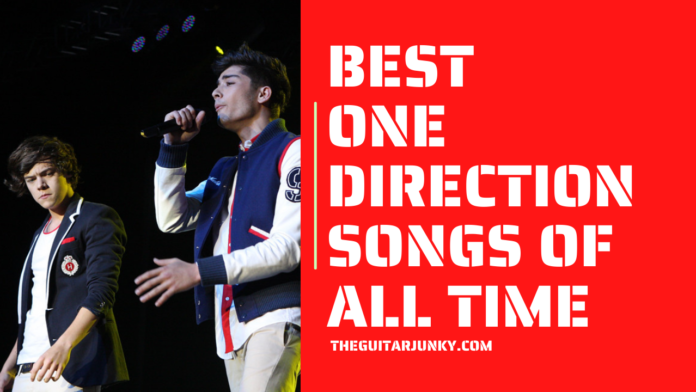 Simon Cowell was not expecting to create one of the most successful boy bands in the 2000s when he grouped five contestants on the X Factor UK.

Although they only placed third in the competition, the band went on and achieved extraordinary worldwide success.

Shortly after Zayn left, One Direction has been on a hiatus since 2016.

However, fans (aka Directioners) are still eagerly waiting for their reunion.

As we wait for that day to come, here are their top ten best One Direction songs that you can listen to in the meantime.

In fact, despite being a B-side track, this song peaked at #87 in the Billboard Hot 100 charts.

Here, the boys sweetly croon over a girl they have been in love with since they were 18.

18 was the perfect song to listen to as you slowly fall in love.

This song was one of 1D’s more creative music videos. Directioners saw a new side of the boys as they had fun and played dress-up.

Aside from their quirky music video, the lead single of Midnight Memories debuted at number #2 in the Billboard Hot 100 chart.

One Direction’s sophomore album, Take Me Home, was one of the band’s most romantic albums in their entire career, giving us “Kiss You”, “Little Things”, and “Kiss You”.

“They Don’t Know About Us” continues the romantic storyline as the boys serenade about a love that other people would not understand.

Trust me, every Directioner was swooning over this B-side, and it shows as the song peaked at #14 in the Billboard 100.

Despite being one of their “edgier” albums, Midnight Memories also had a few sweet slow-burner songs like “You & I”.

This single gave a melancholy vibe with its aching lyrics – not to mention Zayn’s sweet high notes.

While the music video might seem slightly odd, the song was successful in the charts, peaking at #68 in the Billboard 100.

After the playful and euphoric “Live While We’re Young” and “Kiss You” comes the slow ballad, “Little Things” where 1D showed us their sensitive and romantic side.

Their sweet and soulful vocals paint the depth of their love by fondly enumerating all the little things and habits their lover does.

The song became a fan favorite and went on to peak at #33 in the Billboard 100.

Here we see the boys having fun in the desert with different concepts their eccentric Hollywood director, Danny Devito, set up.

This lead single from Four featured a catchy beat as the band brags about their girl to the whole world, peaking at #13 in the Billboard 100.

“Night Changes” was every Directioners’s dream as the music video shows a first-person POV on a date with each member.

The band continues to woo their fans with their sweet vocals as they reminisce and reflect on the changes they went through.

This song is especially bittersweet considering that this was the last single with Zayn Malik before he left the quintet in 2015.

“What Makes You Beautiful” was the debut single that catapulted One Direction to their stardom.

Peaking at #4 in the Billboard 100 and with over 1.2 billion Youtube views, this song became the perfect summer song for many Directioners.

The boyband showed us their charms as they playfully frolic along the beach, all the while serenading us with their earnest lyrics.

And in just three minutes and twenty-seven seconds, the world became smitten with five English/Irish lads.

Midnight Memories was the album where 1D experimented with their sound and showcased their more mature and sensitive sides.

“Story of My Life” is one of their signature and most popular ballads, featuring rock elements and a soulful acoustic guitar.

Accompanying their bittersweet lyrics, “Story of My Life” featured an equally bittersweet music video as the boys sing in a room full of photos while they look back on their childhoods.

The special appearances from their family members serve to make the music video more emotional.

Directioners were pretty much devastated by Zayn Malik’s departure, and many were worried about One Direction’s future.

However, the now quartet proved that they were just fine with their new single, “Drag Me Down.”

With its catchy lyrics and pop-rock melody, this single marked a fresh new sound to the group.

Not to mention, we also got to see and hear more of each member’s skills as they compensate for Zayn’s absence.

The song’s music video was also undeniable cool as we see the boys strutting in spacesuits and training at NASA.

Harry was especially cute as he interacted with a robot.

There you have it – One Direction’s top ten tracks. Looking back, it is undeniable that One Direction dominated the world at some point.

With five studio albums, 1D went on and sold-out tours and won numerous awards. They remain the most awarded act in the Teens Choice Awards and were even named “Artist of the Year” in 2014.

Sadly, the band went on an indefinite hiatus in 2016 and each member embarked on a solo career.

Directioners, like myself, are keeping their fingers crossed for the group’s long-awaited reunion. Until then, we only have their iconic songs to tide us over. Happy listening!