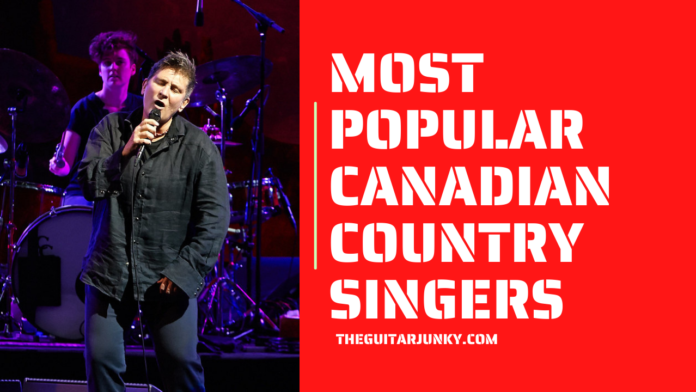 Most people think country music is only a Southern thing.

Canada might not have Dolly Parton, Tim McGraw, Garth Brooks, Johnny Cash, and Blake Shelton, but it did produce some of the finest country singers the music-loving world has ever known.

Who can forget Hank Snow’s iconic baritone voice that charmed audiophiles for more than half a century across 85 Billboard-charting singles and 140 albums?

Or Gordon Lightfoot’s contribution to folk-pop, earning him the accolade, Canada’s greatest songwriter?

While these two Canadian artists are legends, I deemed it more appropriate to look at other Northern country music stars.

Here is my take on the most popular Canadian country singers audiophiles can include in their growing playlist.

Born Eilleen Twain in August 1965 in Ontario, Shania is one of Canada’s most popular country singers, not to mention the world’s ‘Queen of Country Pop.’

Who could forget From This Moment On, You’re Still The One, and No One Needs To Know?

Twain’s contralto voice gives her a distinct tone, perfect for songs filled with themes of romantic longing and female empowerment.

She has a versatile voice, creating domestic-bliss ballads before belting out teasing and taunting sassy rockers, complete with clever wordplay and hooky melodies.

While country purists labeled Twain as a nonconformist, her individuality shined and rubbed into other rising stars, including Taylor Swift, Carrie Underwood, Dean Brody, Brett Kissel, and Tenille Arts.

She also has stars on the famous Hollywood Walk of Fame and the Canada Walk of Fame, five Grammy Awards, 27 BMI Songwriter Awards, and a World Music Award.

The Recording Industry Association of America also credits Twain as the world’s only female artist to have three consecutive Diamond-certified albums.

Billboard considers her the world’s 13th greatest female solo artist in the history of music videos.

Although Morna Anne Murray is a versatile pop and adult contemporary singer, her heart has always been in country music.

Her signature song, Snowbird, not only landed on the US Billboard Hot Country Hits’ Top 10.

It also topped the US Adult Contemporary Chart and landed 23rd on the Singles Chart of the UK.

Experts consider this Nova Scotia-born country songbird the engineer that opened the doors for other Canadian artists to make it big on the global stage, including Celine Dion, K.D. Lang, and Shania Twain.

Murray’s A Little Good News won the Country Music Association Awards’ Album of the Year in 1984, making her the first Canadian to do so.

Anne Murray is also a Hall of Famer of the Canadian Songwriters, Juno, and Canadian Country Music and has her stars on Hollywood and Canada’s Walks of Fame.

Kathryn Dawn Lang is not your average Canadian country artist.

This Edmonton, Alberta-born singer-songwriter is also a staunch advocate for the LGBTQ movement, animal rights, and Tibetan human rights.

K.D. Lang is also a recipient of Canada’s second-highest honor, the Order of Canada.

From 1981, Lang has 41 singles, 12 studio albums, four collaboration albums, a live album, and a soundtrack for the 1993 film, Even Cowgirls Get the Blues.

Known for her boyish looks and western cowboy style, Lang continues to wow the music industry with her phenomenal guitar-playing skills and unique mezzo-soprano voice.

Born in Montreal, Quebec (August 5, 1968), Terry Lynn Clark is one of Canada’s most successful and popular country musicians.

Not only did Clark make it big in the Great White North, but she also splashed the US airwaves with her Top 10 hits, such as I Wanna Do It All, Girls Lie Too, and I Just Wanna Be Mad.

Although Clark is not a Grammy winner, she still made it to the exclusive Canadian Country Music Hall of Fame in 2018.

Lindsay Elizabeth Ell is one of the fastest-rising stars from Calgary, Alberta.

Known for infusing blues and rock elements into her country-pop songs, Lindsay Ell is one of the most popular country musicians ever to come out from the Great White North in the 21st-century.

While Consider This showcased Ell’s multi-faceted singing prowess, it was not until Alone that she gravitated towards the more natural sound of the acoustic guitar.

A songwriting adventure to Nashville cemented Ell’s country roots, culminating in Trippin’ On Us.

A pediatric nurse by profession, Paul Brandt found his country music roots too great to dismiss in 1996.

With 42 singles, five studio albums, three extended plays, and two holiday albums under his name, Brandt is a firecracker in the thriving Canadian country music scene.

He also has accolades from the Canadian Country Music Awards, GMA Canada Covenant Awards, Juno Awards, and other award-giving organizations.

His debut album, Calm Before The Storm, remains one of Brandt’s most successful creations, earning RIAA’s Gold certification in 1997 for the hits Take It From Me, My Heart Has a History, and I Meant to Do That.

Fans know Brandt for his philosophical approach to songwriting, always looking at how the music-loving world will benefit from his music.

One of the youngest Canadian country stars to earn a Female Artist of the Year nomination to the Canadian Country Music Award, Tenille Nicole Nadkrynechny is a Grande Prairie native who started her career in 2009.

Townes’ debut single, Home Now, was a hit among children of people in the military, while her debut album, Real, became the platform for raising support for Alberta’s homeless youth.

Her 2018 song, Somebody’s Daughter, breached the Canadian Hot 100’s magic circle at the 92nd spot while topping the Canadian Country chart a year after.

In 2019, Tenille Townes won accolades from CMT Music Awards and the Canadian Country Music Association, a feat she replicated in 2020 and 2021.

A true-blue cowboy with his ranching background, Brett Kissel is a Canadian country musician popular among rodeo and agricultural communities across the Great White North.

Kissel has four Canadian Country Music chart-topping hits, including Make a Life, Not a Living, Drink About Me, Airwaves, and A Few Good Stories.

This St. Paul, Alberta native released his debut album at the young age of 12 and has promised to deliver a new record every New Year’s Day until 2024.

It is easy to see why Tenille Jade Dakota Arts is a favorite of Canadian and American country music lovers.

Not only does this Saskatchewan artist have an incredible voice, but she also has the alluring looks and magnetic charm to match.

Tenille has three albums and 11 singles to her name, plus eight music videos and three promotional singles.

Hopefully, the same song will land her the CCMA Female Artist of the Year award this year.

She honed her songwriting skills by going to Nashville and joining the Nashville Songwriters Association International.

In 1995, Johnson decided to go big, co-writing the 1999 Billboard Hot Country chart-topping Single White Female before releasing Room with a View under Arista in 2000.

She never looked back since.

With four studio albums and 17 singles under her name, Johnson has become one of the Great White North’s prime country music movers.

She has multiple awards from the Canadian Country Music Association, Academy of Country Music, and Juno Award.

These Canadian artists’ music might be slightly different from their Southern counterparts across the border.

Regardless, their songs remain true to the ideals of good ole country music – melancholic and romantic ballads with simple harmonics and forms made more exemplary with stringed instruments.

Hundreds more Canadian country singers are making huge waves at home and on the international scene.

It is up to you to discover them and include them in your playlist.