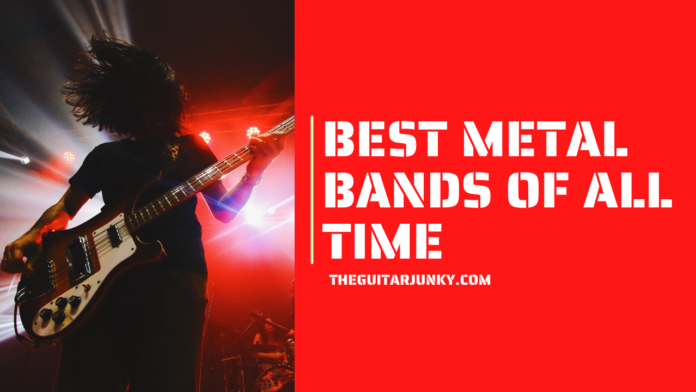 No other music genre can be as provocative and controversial as heavy metal.

Invented way back in the 1960s as a vehicle for venting out artists’ frustrations against social and societal evils, heavy metal has grown a substantial following.

There are now thousands of bands hoping to follow in the footsteps of the gods of metal.

While it takes a whole lot more than the usual perseverance and dedication to carve a name for thyself, you can always find inspiration from those who have made it to the summit of Mount Heavy Metal.

Here are 10 of the music world’s greatest heavy metal bands that you can look up to.

With a name that is as deadly as it sounds, Anthrax is one of those heavy metal bands that are never afraid to experiment with their music.

This is one of the world’s recognized leaders when it comes to trash metal. You can bet that the group’s music is as aggressive as Slayer, Metallica, and Megadeth.

The speed of their guitar slinging and rhythm is also out-of-this-world. Comic book fans can easily relate to the band’s lyrics.

Their songs have humor, too. It is a very interesting mix that separates Anthrax from other heavy metal bands.

Most audiophiles believe that Alice in Chains is too lame to be considered a heavy metal band.

The group is more known for its grunge music that comes embellished with all the unique elements of heavy metal.

Whether or not you believe this group to be a true heavy metal band, they are one of the music world’s most influential artists.

The vocals are so great that the band got nominated to the Grammys 11 different times.

People know Pantera as the band that popularized groove metal. Fans of trash metal often lament the bastardization of their favorite metal subgenre.

Pantera still owes its music from trash metal and more traditional heavy metal genres. However, their songs are unique in that it involves down-tuned guitars, syncopated rhythms, and heavy guitar riffs.

Add to these elements the screaming and raspy singing of Phil Anselmo and you have a metal group that loves to hear its fans screaming in front of them.

With more than a hundred million albums sold under their name, Motley Crue is one of the world’s greatest heavy metal acts and a very enticing group to watch, too.

The group has multi-platinum certifications that exalt androgynous personification and hedonistic lifestyles.

The American metal band’s initial offerings were quintessential heavy metal with a hint of hard rock.

Upon the release of the Theatre of Pain, the group was more than ready to unleash pop-influenced guitar riffs and electrifying hooks.

One of the oldest heavy metal bands on the planet, Judas Priest continues to wow the headbanging crowd with their progressive metal style.

This is an English band that remains faithful to their origins.

They make songs with more poetic lyrics and none of the garbage-like mumbles that you would strain to understand. The guitar passages are as complex as any other heavy metal band of the 70s.

Not really heavy, but enough to get you thumping. Through the years Judas Priest managed to develop more radio-friendly styles to appeal to their growing number of fans.

In particular, the rhythm sections of each hit serve as a hallucinogen that is capable of transporting you to another world.

While some folks may find the lyrical themes of religion, war, and death to be distasteful, Megadeth simply does not care.

What this American metal band really cares about is expressing their views in the most insane and most powerful way possible.

They remain one of the most influential metal bands despite their own battles with substance abuse.

One of metal kingdom’s Big Four, Slayer started enthralling the crowd with their very provocative themes and soul-drowning distortions in 1981.

The American band is the subject of numerous bans and lawsuits because of their songs that contain incendiary and offensive lyrics.

Despite these obstacles, the group still managed to release a dozen studio albums, four of which received gold certification.

If you think these do not mean anything, then you need to know that Slayer also got nominated twice to the Grammys. Not bad for a lawsuit-magnet.

This is a band that is so popular that it only required very little television and radio support. It managed to sell more than 100 million albums through 45 fruitful years.

It is one of the heavy metal greats that contemporary metal bands look up to.

Even Metallica, Slipknot, and Avenged Sevenfold have Iron Maiden as their inspiration.

Some groups call the band as the followers of Satan. However, loyalists argue that Iron Maiden is simply misunderstood.

What is important for fans is the rawness of the band’s music that can really stir the soul.

The granddad of metal, Black Sabbath remains a formidable force in the music industry. The band started creating distortion-heavy songs with dizzying guitar licks and thunderous drum beats in 1968.

While the group had a brief 5-year respite from 2006 to 2011, they still managed to create a few spectacular numbers during their re-emergence.

News has it that the group is planning a reunion in time for the 2022 Commonwealth Games.

That would really be an awesome way to electrify the sporting crowd, not to mention relives the Black Sabbath lore.

This heavy metal band is the quintessential nonconformist, who prefers doing things their way than being swayed by their fans. Followers can complain all they want.

However, there is no stopping the band when it comes to making lightning-fast tempos, 9-minute instrumental tracks, and harmonized leads. Nonmetal audiophiles consider Metallica’s songs as nothing more than trash.

What they do not realize is that the volume and speed of their music come with compositions that have very intricate structure.

Only a genius can whip up such songs that glue adoring metal fans all over the world.