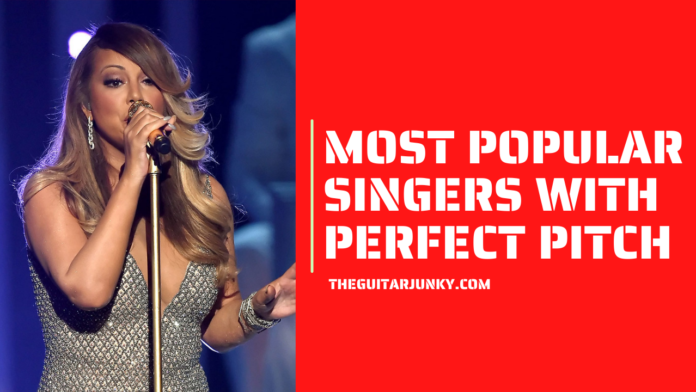 Perfect pitch is a special music skill that not every singer or person possesses.

It’s a unique ability to recreate a tone immediately all just by listening to it.

This musical ability of our brain works by keeping track of the tones and tunes.

Only the chosen ones possess the perfect pitch skill; they have the power to decode with their ears!

The skill is common among singers, composers, musicians, and instrumentalists, and only those who have this special human power can segregate tones and sounds.

Perfect pitched people can recreate the tones, and that keeps  them on top of their game.

To give you a clearer idea, people with perfect pitch (Absolute Pitch) are individuals that have a larger auditory cortex when compared to people who don’t.

Are you ready? Let’s begin.

Did you know that “Mimi,” the name that Mariah is called by people close to her, had shown this unique skill when she was only four years old?

Her mother noticed that Mariah could sing any song that she’s just heard.

Who else doesn’t know her?

She’s one of the most famous singers of all time, not only for her awesome looks but also for her distinct, powerful voice.

She’s also the only singer that can sing in five octaves and her pitch is one of the most known and admired in the world.

Mariah has a unique breathing technique, too, and does breathing close to her microphone. This controlled breathing gives more power to her voice.

Although already in her superstar status, she continues training and developing her voice and singing skills.

She has beauty, personality, and showmanship, too, and has one of the most powerful voices in the music industry’s history.

Unless you’re living in a cave, you’ve probably heard of Michael Jackson.

MJ, as many call him, is undoubtedly one of the most known icons in the music industry.

He is known for his superb voice and dance moves and is certainly a great concert performer.

Also called the King of Pop, Michael is a singer that can touch the heart and soul of his audience because the lyrics of his songs are very touching, as they tackle social issues and inequality, while also encouraging people to be human and do good to all humanity.

The Thriller singer is an AP master and superb in falsettos, allowing him to produce super high notes.

But if you don’t know yet, MJ didn’t get to where he was if not for his perfectionism and hard work, practicing hours and hours to perfectly sing a single song.

As someone with an AP skill, he sees to it that his pitch or tone is always perfect.

A famous 20th-century singer, Sinatra is an AP whose songs are a favorite in past time sing-along sessions, especially of older folks.

At a young age, it was evident how Sinatra’s interested in performing arts.

He grew up in his parents’ tavern where he plays the piano and sings after doing his homework.

Even if he had no formal music education, it didn’t become a hindrance for him to develop the perfect pitch that made him a perfectionist.

Frank, who worked as a conductor in Columbia Records, has superb AP skills. His colleagues revealed that he could also easily hear out-of-tune music that’s playing in an orchestra.

For being a perfectionist, a lot of singers and musicians aren’t comfortable working with him.

Perfectionism also leads him to keep practicing until everything is pitch-perfect.

The genius was the lead vocals of Queen, one of the most famous bands of all time, and has been taunted as one of the best performers of all time – in fact even voted as the “best male singer of all time.”

Not only remarkable for perfect pitch but also his genius; he writes his songs and entertains everyone with his out-of-this-world singing style.

Freddie’s unique style is one of the reasons fans globally are drawn to his band and Freddie himself.

Fans claim that Freddie likes telling a story when singing through changing his pitches and tones; thus, every song that he delivers appeals to the audience.

Not to mention, the lyrics are also exquisitely written.

And best of all, Freddie’s able to express his emotions while singing.

This genius also plays instruments, such as the piano, and due to his perfect pitch, he’s able to pick musical pieces right on the spot and then start playing!

The perfect pitch singer is popular for his distinct bass-baritone voice.

He’s a jazz singer that was one of the first to sing jazz in a live audience and that possesses a story-telling, emotional singing style.

However, he’s not only a talented singer but also an actor who was able to act in different movies.

[Did you know that the microphone was first introduced during Crosby’s career?]

Bing Crosby was one of the most famous performers of the 20th century not only for his perfect pitch but also for his style.

Another AP skilled artist Fitzgerald, who is a jazz singer, and is a notable artist also called Lady Ella and First Lady of Song.

At 14, she started singing on the streets of Harlem and had appeared on Amateur Night when she was 17 at the Apollo Theater.

Later in 1935, she’s already performing with numerous orchestras and bands.

She had an excellent perfect pitch that was very accurate, making the band in her performances tune to her.

As early as four years old, he was able to display his perfect pitch.

He started developing his AP when he was four, with his mother teaching him to play the piano at a young age.

When he was 10, he’s already studying jazz and recording as well as earning through his music by selling albums to his neighbors.

He also revealed that the school suspended him because of this.

Puth was first known for his viral YouTube videos.

Since his album launch when he was 25 years old, he’s been able to entertain and wow millions of fans all over the world.

By now, he’s already working with names like Wiz Khalifa and Lil Wayne. A few of his greatest hits are “One Call Away” and “See You Again.”

A world-renowned artist and singer most notable for her perfect pitch and powerful voice.

She has won numerous awards throughout her career, and this included Tony for her role in Miss Saigon.

Along with her growing list of recognitions, she’s also able to play Eponine in Les Misérables and then returned to the show in 2006 as Fantine.

A lot of Disney fans would also easily recognize her singing voice for hits like Fa Mulan (Mulan and Mulan II) and Princess Jasmine (Aladdin).  Because of her excellent portrayal of these princesses, she’s bestowed the honor of “Disney Legend” by the Disney Company.

An idol from the hippy era, Jimi Hendrix is considered one of the best singers and guitarists of all time.

He’s known as a pioneer of electric rock and for his music that inspires freedom and love.

His guitar produces unique and incredible sounds and harmonies, and many could tell that his song is being played in the first few seconds of playing it.

Jimi inspired an entire generation to love and have more peace.

It’s not only his personality and life beliefs that shine but also his absolute pitch.

A little story:  When he was a new artist, he couldn’t afford a tuner, so he would go to a music store and play some empty strings, and then try memorizing the sounds. By the time he’s home, he’d start tuning his guitar, only based on what tunes and sounds he memorized.

How cool is that?

Could you imagine that kind of talent?

A world-famous performer and singer, Houston remains the solo artist to top the charts with seven hits in the Billboard Hot 100.

She also holds the record of the top-selling debut album, “Whitney Houston,” by a female artist in history.

It’s also named the best album of 1986 by Rolling Stone.

In 1987, her album “Whitney” debut at #1 on the “Billboard 200” album chart, making it the first album by a woman to earn that achievement.

Who among these singers do you think is the #1 perfect pitch singer of all? Or do you think we forgot your favorite singer on this list? Tell us in the comments.