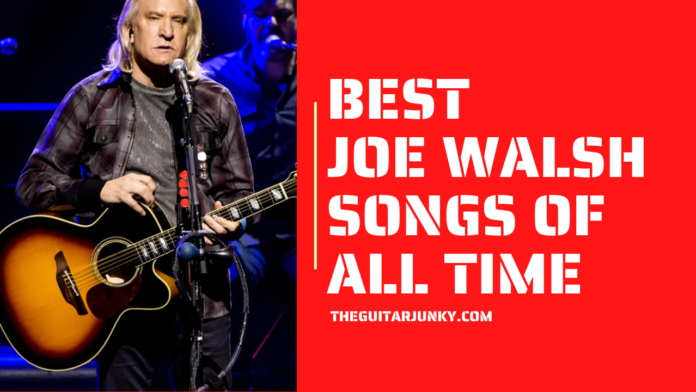 The Rolling Stone will not consider Walsh the 54th greatest guitarist in humankind’s history if not for his magical fingers that dance on the fretboard.

A member of three all-time greatest rock bands, including Ringo Starr & His All-Starr Band and the Eagles, Joe Walsh is a successful session musician and a high-flying solo artist in the hard rock, blues rock, country rock, and pop-rock genres.

It is not surprising Spotify dedicated a page for the seasoned and well-revered guitar master and rock legend.

This article shines the spotlight on ten of the best Joe Walsh songs making headlines on Spotify and other streaming platforms.

Some people may not take too kindly to what I.L.B.T.s stands for, while others see it as Walsh’s display of his humorous, happy-go-lucky side.

I Love Big Tits, I.L.B.T.s for short, escaped the scrutiny of record moguls to Walsh’s delight and amusement.

Walsh said the record company wanted to scrap the track from the album – three weeks after it went public.

While The Confessor failed to breach the Hot 100’s magic circle, it managed to bag the eighth spot on Billboard’s Hot Mainstream Rock Tracks.

This song is the longest track in Walsh’s album, lasting more than seven minutes and divided into two sections.

The song opens with a slow acoustic riff before wowing listeners with Walsh’s vocals.

Anyone who is struggling with substance abuse and addiction knows how Joe Walsh feels recovering from his demons.

One Day At A Time reflects on Walsh’s struggles with cocaine addiction and alcoholism, underscoring the painful recovery process one day at a time.

The good news is that Walsh conquered his social ills, a feat that others can replicate.

There is nothing ordinary nor average in this 1990s Joe Walsh song.

It is a reflective song, underscoring Walsh’s growing weariness with the industry’s so-called superstars, which many listeners find surprisingly difficult to understand and appreciate.

Like the rock songs of the early 1970s, Turn To Stone has all the elements that can launch a new band to superstardom in a flash.

Unfortunately, it was Walsh’s single that breached the Billboard charts at the 93rd spot in 1974.

Two more years and Walsh included this song in his live album You Can’t Argue with a Sick Mind.

The Eagles also performed Turn To Stone live in Inglewood, CA in 1980, proving to detractors that nobody can kill a classic rock piece.

In The City (The Warriors: The Original Motion Picture Soundtrack, 1979)

In The City provided the perfect musical background to the Walter Hill-directed action thriller cult film, The Warriors.

The Eagles would release their version later that year, including a video showcasing Walsh on a Gibson double-neck.

This song is a Walsh staple, a permanent fixture on many of his concert tours.

A Life Of Illusion (There Goes the Neighborhood, 1981)

This rock song is one of Walsh’s most recognizable, prompting other artists to cover it, including Foo Fighters.

The 40-Year Old Virgin also used the song in its opening scene, allowing the film to roll on.

Although A Life Of Illusion did not get any award nominations, it performed surprisingly on the charts.

The song topped the Billboard Mainstream Rock in 1981 and landed on the Hot 100’s top 34th spot.

The original 1973 Rocky Mountain Way version is less than nine minutes long – too extended for the live audience of Don Kirshner’s Rock Concert at the Santa Monica Civic Auditorium in 1976.

That is why Walsh decided to cut two minutes from the original song – sufficient to give the listeners what they paid for.

Like the original, Walsh mesmerized the crowd with his fingerstyle, giving them the perfect reason for being an Eagle.

Rocky Mountain Way (The Smoker You Drink, The Player You Get, 1973)

Even the Denver Broncos inked a deal with Walsh to use his song for their celebrated QB, John Elway, turning the musical hit into Rocky Mountain Elway.

While this song did not snatch any major awards, it earned the respect of the music industry by landing on the 23rd spot of the Hot 100 and 13th on the Cash Box’s Top 100.

The song also entered the magic 40 in Canada, the UK, and Australia.

Joe Walsh’s most successful solo hit, Life’s Been Good, is a less-than-nine-minute satire of the excesses and unnecessary antics of rock stars of the era.

The song has a reggae-like groove punctuated by Walsh’s mastery of bedrock guitar riffs.

The lyrics are almost comical, and the verses follow a quintessential call-and-response style.

Some say the song is an autobiography, although Walsh is quick to point out the difference.

Life’s Been Good peaked at the number 12 spot of Billboard’s Hot 100, number 11 on Canada’s RPM Top Singles, 13th at the Irish Singles Chart, and 14th on the UK Singles Chart.

The best Joe Walsh songs exemplify the rock artist’s command of the guitar and other musical instruments.

While not many landed on the Hot 100, Walsh’s songs also offered a glimpse into the mind and soul of one of humankind’s most artistic guitarists.