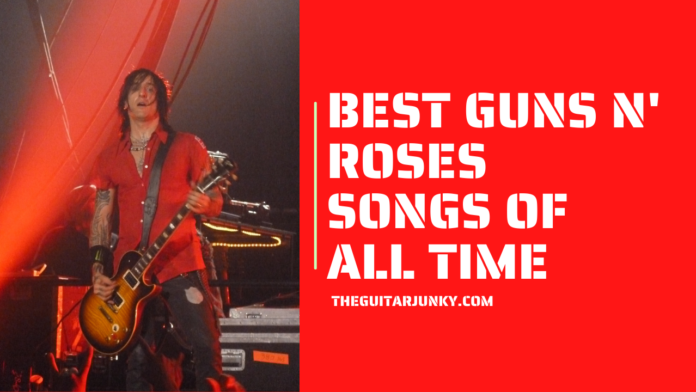 Very few rock acts can come close to the raw honesty and fidelity of the songs of Guns N’ Roses.

Axl Rose has always been very straightforward about the issues that matter to him and his band.

The same is true with GNR guitars.

Most of their songs are devoid of the lavish embellishments that many rock groups add to their creations.

You only get two dudes executing riffs after amazing riffs in a duel worthy of a scene in the Wild West.

While the foundations of GNR’s music are complex, it is easy to feel intoxicated with the blues-infused rhythm of Izzy and the slinging solos of Slash.

This is what GNR fandom calls a hell of a rock band.

So, which of the hundreds of songs across 19 singles and 18 albums deserve a spot in our Top 10 Guns N’ Roses songs in history? Let us find out.

Some people may find Mr. Brownstone distasteful, as it seems to venerate heroin use.

However, one cannot deny the power of the song in addressing one of the rising public health concerns of the second half of the 20th century.

The song is unapologetic in describing what many illicit substance users go through.

Beyond its controversial theme is a compelling composition made extra spectacular by the infectious, blues-tinged, Bo-Diddley-like rock beats of Steven Adler.

Watching the music video of Civil War and it is impossible not to think about the fallen men and women of conflicts all over the world.

This song is an anti-war epic that describes Axl Rose’s grief over the loss of many icons of democracy and freedom.

It has a moving melody that is never devoid of the Axl’s signature vocals and Slash’s amazing licks.

A quintessential rocker, It’s So Easy chronicles in a song Guns N’ Roses’ hardships during their early days.

No money, yet plenty of support from the people around them.

The introduction sounds like galloping stallions on the prairie, heralding the arrival of the electric axe cavalry.

The band gave Iggy his way in electrifying the song with his phenomenal rhythm backing.

The composition started out with a country tune, only to be overhauled and transformed by Slash into a distinctively sounding rock piece.

Appetite for Destruction’s closing track balanced the seedy and dark undertones of Sweet Child o’ Mine with a bit of positivity. Rocket Queen is the band’s tribute to the unconditional loyalty and dedication of two former equally gifted female band associates.

Starting out as a band is never easy. However, these two rock chicks made sure GNR reaches the summit.

There is a braggadocio-fueled rocker in the beginning and a soulful and reflective section in the second.

This is another testament to GNR’s versatility.

If GNR did not write Sweet Child O’ Mine, Don’t Cry would have been the hit that carried Appetite for Destruction to the top.

The group wrote Don’t Cry in 1985, only to shelf it for about 6 years before finally releasing it as a track on GNR’s third studio album, Use Your Illusion I.

The same song would reappear in the band’s fourth album, albeit with different lyrics for the verses.

Regardless of which version you decide to listen to, Don’t Cry remains a smoldering love song that Slash made even more beautiful with his timeless guitar solos.

It is unfair to label GNR as nothing more than rambunctious punks with bloated egos that will never fit any manmade vessel.

What many audiophiles fail to see is the camaraderie and brotherhood that these testosterone-filled young men have for each other. Such camaraderie is instrumental in the creation of many GNR greats.

This is the case with Paradise City.

Very few people know that the band created this classic rock anthem in a van the band leased from the Bay Area to LA.

This is what many of us need when we find ourselves in troubled waters.

A soulful ballad with all the elements of rock somewhat subdued to give the song a more reflective character.

It is a gem of a composition. One that Izzy is definitely proud of.

Three acoustic guitars sang in unison to provide a colorful backdrop to the wails of a man looking to extend a little bit more of fortitude in his relationship with the woman of his life.

This is a song worth playing anytime you feel like giving yourself a push.

Listening to this 1987 song will make the hairs on your arms stand up because of its magical composition.

It is a testament to the versatility of Guns N’ Roses.

Not only is this rock band slaying rock n’ roll with their testosterone-fueled music.

They can also project vulnerability and display poetry in music at the same time. What is startling is that the band did not take long to create this masterpiece.

It speaks volumes about the group’s musical ingenuity and spontaneity.

Slash once said that there is an 18-minute version of this 1992 hard rock power ballad. That was in 1986 before the band began working on Appetite for Destruction.

Some say Axl Rose is only trying to create a piece that can rival Queen’s Bohemian Rhapsody.

While the rest of the band did not agree with the shift of focus from rock to symphonic ballads, Axl Rose used his charm to entice them anyway.

Welcome to the Jungle

This is a classic Guns N’ Roses. Period! No matter what other people say, Welcome to the Jungle IS GNR’s greatest song.

From the menacing vocals of Axl Rose to the ferocious, stabbing guitar licks of Slash and the overall sleazy groove of the song.

This song also happens to be the final piece in the rock band’s launch to super stardom.

We all love the song’s ability to portray the band’s unpredictability, danger, and sheer edge in a relatively short span of only four minutes.