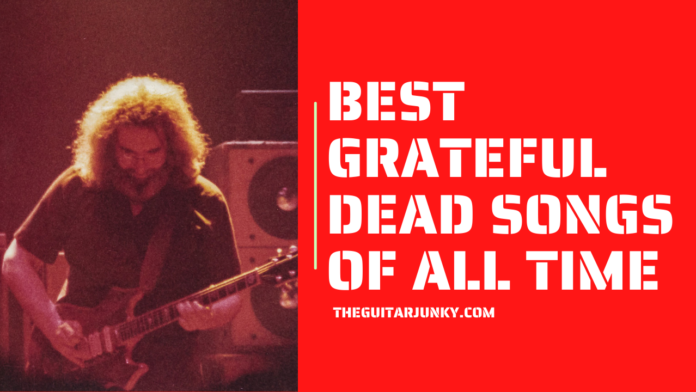 The Grateful Dead is a classic rock band that originated in the 1960’s.

They are known for their unique sound and improvisational performances. The Grateful Dead has created a legacy of live recordings, spanning over 3 decades.

Here are 10 of the best Grateful Dead songs to show your appreciation for this iconic band.

“Friend of the Devil” is a truly beautiful Grateful Dead song that was written by Jerry Garcia and Robert Hunter.

This song was originally included in the band’s 1971 album “Grateful Dead”.

The single peaked at #54 on Billboard Hot 100 singles chart in 1972 and stayed there for one week.

Since its release, it has become one of the most performed Grateful Dead songs ever.

The live version is considered to be the best recording of this song, making it a favorite with fans worldwide. Bob Weir (rhythm guitar), Phil Lesh (bass) and Ron “Pigpen” McKernan (keyboardist/vocalist) added some great riffs to make this one of their best songs.

When the Grateful Dead performed this song, it started with an acoustic guitar intro by Garcia and was always joined together by a unique harmony in the chorus. The music video of “Friend of the Devil” combines live footage from spring 1990 and fall 1989 performances along with editing that shows scenes from vintage time-lapse photography.

This highly recognizable song is also ranked #24 on Rolling Stone’s list of 100 Greatest Guitar Songs Of All Time.

Let’s face it, the Grateful Dead struggle to write songs.

They definitely were not a prime songwriting band by any stretch of the imagination, but they do have their moments.

One such moment is Casey Jones, which is one of their better known and most frequently covered compositions (by other bands).

It was first released in 1970 on American Beauty (the year before Truckin’ appeared), and has since been played at countless shows over the years.

The best part about this song for me personally is its upbeat tempo that I can’t help but tap my feet along too! Definitely one of the best Grateful Dead songs ever.

If you were forced to choose only one Grateful Dead song, a safe bet might be “Ripple.” It’s the most requested song at Jerry Garcia Band shows (after “Truckin'”).

And it seems to be the go-to choice for covers. A sampling:

This song has not simply endured, it soars. From its lilting refrain back to its wistful major key verse and on through subtle shifts in tempo and rhythm — as if guided by an invisible hand — it is still capable of casting a spell.

The joyous touch of pedal steel guitar does not hurt.

The song is a pure distillation of the Grateful Dead, and like many such songs, it resists interpretation.

It was never about anything other than itself — and its joyful search for meaning within the sound of words set to music.

Touch of Grey was the song that got the Dead back on track and into the mainstream.

They had been recording for ten years, having released eight albums total, with no real success to speak of.

The live shows were in danger of becoming too big to fail, but still not hitting it out of the park.

Then this song came out, and suddenly there were younger people going to Dead shows who weren’t yet born when they started touring.

It’s a great rocker that features some gritty guitar work from Jerry Garcia along with Bob Weir’s trademark rhythm work.

You might be saying “Molly is knocking Touch of Grey?” At first listen I wasn’t really sure about it myself – but after a few listens it grew on me more and more.

This is far from a perfect song, but it’s one that just totally instantly makes me want to rock out.

The Dead played this last in 2009 , at the final song of the final show at Soldier Field , where they started their career way back in 1965 .

It’s a fitting end for them – whatever you think about Touch of Grey as a song, whoever you are, when you hear that opening lick it takes you right into the band.

You can’t listen to it without bopping along with some part of your body.

That’s not easy to do with Grateful Dead songs – there are many cases where if you don’t know the tune well you might be moving your head or tapping your foot without even knowing why .

Touch of Grey, though, you just can’t resist.

It’s so catchy that it makes you want to get up and dance or something.

And let’s face it – if there are any benefits from the eventual decline of civilization , it will be the end to this sort of stuff being played on pop radio.

We’ll have more room for Jimi Hendrix and The Velvet Underground to play on the airwaves.

It also has Bob Weir of the Grateful Dead taking his lead vocal turn as a songwriter on a classic that appears to encompass nearly every musical style you can think of.

The lyrics are simplistic but engaging in its storytelling, which is not typical for the band at all–and therein lies its appeal.

The theme here is not overtly stated (as with so many Grateful Dead songs) but rather understood from listening to the entire piece: Life on the road is tough but you have to do it because you love doing it.

Another song that the band wrote and recorded for their 1981 album, Deal appeared on the Dead Set album.

The track is notable because of its unique structure: rather than just being one chord progression repeated over and over, this piece alternates between two chords to create a very cool effect.

I’m not sure if they intended to write it this way or not, but either way I really love it.

Clearly the band’s best song from 1972, Jack Straw was originally written by Mexican folk musician Alfredo Gutierrez in 1958 and recorded by various artists throughout the years – most famously by The Rolling Stones for their 1970 album ‘Madman…’ (yes, that’s actually what it was called).

The Dead loved this song so much they started covering it regularly during live shows in 1967.

However, despite how often they played it over the years, they never even released a studio version until now!

On Aoxomoxoa there are actually two versions included: one with an electric-guitar solo and another with a pedal steel guitar solo.

However, it’s been covered many times over the years by many different bands and artists – most famously by Van Morrison in 1968 which resulted in him being sued for royalties and led to him performing it as ‘Brown-Eyed Girl’ on his 1970 album of the same name.

The Dead released their studio version on Workingman’s Dead . I love this song so much because of its fast tempo that makes it easy to get up and dance along too!

“The Other One” is not just one of the best Grateful Dead songs. It’s also one of the band’s most important instrumental jams.

Before they composed their first jazz-inspired tunes in 1968, and later wrote their famously literate lyrics, there was “The Other One.”

A benchmark for all future Dead jamming, it proved that a dead song could easily be about more than being dead (a la “Sugar Magnolia”).

Indeed, this song about the death of an unnamed friend doesn’t always seem to have anything to do with mortality at all. Rather, it seems to take its namesake seriously as a way into some ecstatic space where matter gives way to pure energy and emotion takes over the senses — that place which Pigpen would later call, in “Caution (Do Not Stop on Tracks)” — “the other one.”

When the Dead first used this Dylan cover in concert, many fans openly questioned whether it belonged in their repertoire at all.

They had good reason to worry: Like so many songs performed by rock bands — particularly bands without a singer or songwriter to focus them — it was overly complicated and lacked flow.

And then, while learning how to perform the piece live, they discovered its flaws from their own perspective.

“The St Stephan Blues,” as lyricist Robert Hunter called it, is an improvisational nightmare for two reasons: It has one chord change per verse and no chorus; instead, each line of verse ends with a period which essentially repeats the chord in question, so the song feels like a gigantic round.

I hope you enjoyed this list of the 10 best grateful dead songs.

If you have any other thoughts or suggestions, please let us know in the comments below.

Thanks for reading and listening!