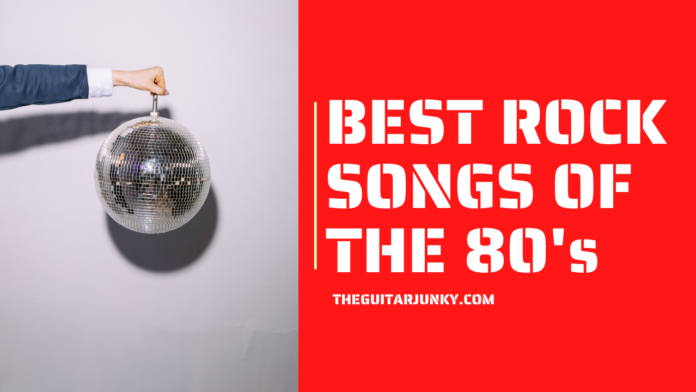 The best rock songs of the ‘80s continue to enjoy significant playtime exposure on leading music streaming platforms, such as Spotify and iTunes.

While some artists who made these phenomenal songs a hit are already playing the harp with the angels in heaven, modern audiophiles still savor the elements that define these rock anthems.

It is not easy to come up with a definitive list of the world’s best 80’s rock songs.

However, Spotify and other streaming platforms have made the selection more effortless by compiling the best-performing hits in contemporary times.

In this article, we will look at ten of Spotify’s best rock songs of the ‘80s.

Get ready with the guitars, synths, and drums as we roll into an era of raw musicality.

Starting our countdown of the best rock songs of the ‘80s is Girls, Girls, Girls from the glam metal band Motley Crue.

It reached the Billboard Hot 100 at the 12th position and 26th on the UK Singles Chart.

The song also snagged the 20th spot on the Billboard Mainstream Rock while landing one notch higher at the Hot Rock & Alternative Songs upon its re-release in 2019.

Every Breath You Take (The Police, Synchronicity, 1983)

Number 84 on the greatest songs in humankind’s history, Every Breath You Take is one of the best rock songs ever and not just the 1980s.

It earned the accolade of many respected organizations, including Billboard, Q Magazine, and Rolling Stone.

The song is one of the musical pieces considered by experts as influential in defining and shaping rock and roll.

Also Read: 10 Best The Police Songs of All Time

Dancing With Myself (Billy Idol, Kiss Me Deadly, 1980)

You can forgive Billy Idol’s punk getup because his Dancing With Myself still enjoys substantial coverage even after more than four decades after its release.

The song failed to top any leading record chart, but it did land on the 62nd position on the UK Singles Chart.

The opening guitar riff is enough to get you swaying your head left and right.

Should I Stay Or Should I Go has a characteristic rhythm and hook that sets it apart from other rock songs of the time.

It landed a spot in Rolling Stone’s elite club of the greatest songs in humankind’s history while topping the UK Singles Charts and earning a Platinum certification from Italy and the UK.

Topping the Billboard Hot 100 and Mainstream Rock upon its release, Livin’ On A Prayer is Bon Jovi’s signature song.

It also topped VH1’s 100 most iconic 1980s songs and continues to chart decades after its release.

Jon Bon Jovi’s vocals and Richie Sambora’s guitar antics are phenomenal onstage and on the air, enticing anyone who hears the song to get up and dance.

This rock song topped the charts in at least eight other countries while gaining multiple Platinum certifications in six countries.

Known for its punchy bassline rhythm from start to finish, Another One Bites The Dust is one of the most iconic rock songs of all time.

This Queen creation hugged the Billboard Hot 100’s top spot for three weeks and stayed on the Top 10 for a record 15 weeks.

It also has a Grammy Award nomination and an American Music Award under its title.

Another One Bites The Dust has multiple Platinum certifications from the US, UK, Australia, and Denmark.

What do the Olympique de Marseille, A.C. Milan, Detroit Pistons, and Winnipeg Jets have in common?

Besides being some of the sporting world’s most respected professional teams, they also love playing Van Halen’s Jump in their games.

The music industry also recognized Jump as one of the most influential songs that shaped and defined contemporary rock and roll.

It is certified Platinum in the UK and Italy and placed ninth on Billboard’s Hot Rock & Alternative Songs during its 2020 re-release.

Combining elements of glam metal and hard rock, Pour Some Sugar On Me is one of Def Leppard’s most successful hits.

The arena rock song landed at the second spot on VH1’s 100 greatest musical numbers of the 1980s while bagging the number two position on Billboard Hot 100.

Welcome To The Jungle (Guns N’ Roses, Appetite for Destruction, 1987)

One of Rolling Stone’s 500 historically greatest songs, Welcome To The Jungle is a mainstay in sporting events and large social gatherings.

The song is a fitting piece to the Guns N’ Roses’ entry into the rock and roll kingdom, electrifying the crowd whenever they play this hit in their tours.

Axl Rose and Slash collaborate to create one of the music world’s most enduring anthems, complete with an iconic riff that aspiring guitarists must learn.

VH1 considers Welcome To The Jungle the world’s second most influential metal song, while Kerrang! listed it as GNR’s best musical piece.

You have to love Angus Young’s mellow guitar intro to this song before Malcolm Young, Cliff Williams, and Phil Rudd join in the opening verse.

It is pure rock after that.

You Shook Me All Night Long is a rock anthem beyond compare, with its heart-pumping drum beat and bassline that drives the song throughout the 3.5-minute piece.

The song peaked at number 35 on the Billboard Hot 100 and 38th on the UK Singles Chart.

The best rock songs of the ‘80s shaped and defined modern rock and roll and continue to enjoy substantial airplay from contemporary media channels.

With their catchy tunes, danceable melodies, and highly relatable lyrics, we will not be surprised if these songs will continue to wow audiophiles in the 22nd century.