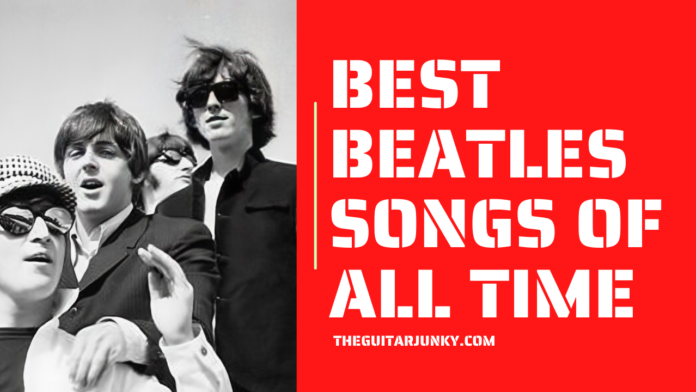 It is almost impossible to imagine contemporary music without the Beatles, period.

They were part of the British Invasion that included other UK influential greats such as The Rolling Stones, The Yardbirds, and The Animals, among others.

However, popular music would never sound this good if not for the Fab Four’s pioneering works in studio recording wizardry, seamless orchestration, and the integration of classical strings.

It would be almost impossible to narrow down the greatest Beatles songs, as each one can be a surefire hit.

Nevertheless, Beatlemaniacs all over the world have spoken.

Here are the 10 greatest songs ever recorded by The Beatles:

This 1968 tearjerker is a super-emotional, huge-hearted epic that displays McCartney’s connection with the deepest of human emotions.

McCartney wrote it as a way to console the son of John Lennon over the breakdown in his parents’ relationship.

Only three minutes of the 7-minute long song has the full lyrics.

The remaining four minutes features a coda that has become one of the world’s most recognizable hooks.

The ‘na-na-na-na-na’ hook never fails to get anyone humming this beautiful song.

I Want to Hold Your Hand

This song galvanized rock and roll in American shores.

It came at a time when this musical art form is already beginning to lose its edge.

The Fab Four reinvigorated the American passion for rebellious music when they performed I Want to Hold Your Hand at the Ed Sullivan Show.

Viewers got a taste of the raucous track that showcased the masterful vocals of Lennon and McCartney.

This is the Beatles first-ever song to top the Billboard Hot 100 in 1964, a sign of more wonderful things to come.

This song starts with one of pop music history’s most iconic opening chord and finishes with a 12-string arpeggio that only Harrison can execute.

In between, you have everything that you have come to love about the music of the Liverpool boys.

There is a killer bridge that gets you addicted and an earworm melody that will have you singing the song for several days nonstop.

What is phenomenal about the song is the trickery employed in its recording to give Harrison’s guitar solo a harpsichord-like sound.

Some people say that Let It Be has pseudo-religious qualities. Others consider its melody as nothing compared to other Beatles songs.

Regardless of what people think about Let It Be, this remains one of the Fab Four’s most important musical pieces.

It marked the end of the decade-long fun that the Liverpool boys had together.

Like everything else that the Beatles makes, Let It Be stops you from whatever you are doing and compels you to listen with all your heart.

Such is the power of this song.

One thing that makes the Beatles great is the raw talent of their individual members. Sure, everyone knows how legendary John Lennon and Paul McCartney are.

However, George Harrison and Ringo Starr also have their unique talents that make them excellent artists on their own.

Something is a testament to George Harrison’s undervalued songwriting.

It is a very beautiful love song that no less than Frank Sinatra praised the piece as the greatest love song in the last half century.

You can easily feel the emotions in Harrison’s guitar solo.

Hailed by many as one of the Beatles’ most distinguished works, Strawberry Fields Forever offers a very different kind of listening experience to Beatle fans everywhere.

The song also offered a variety of innovations, including the use of an Indian swarmandal, reverse-recorded instrumentation, fade-out and fade-in coda, and the unique sounds of a Mellotron flute.

Lennon and McCartney collaborated with their producer to provide the song with a brass and cello arrangement to further improve the harmonic and melodic qualities of Strawberry Fields Forever.

This is one of the Beatles’ most recorded or covered songs. Not less than 2,200 artists have covered Yesterday in an effort to keep aflame the passionate message of the song.

It is melancholic, given McCartney’s penchant for sentimentality. While the song was credited to both Lennon and McCartney, only Paul sang the vocals.

What made this song quite extraordinary was the addition of a string quartet.

It gave the song a more powerful, albeit saddest melody that anyone who has ever been heartbroken can easily relate to.

It is easy to fall in love with this Beatles song.

It has a very lovely tune, an unforgettable message, and a bridge that transports you to paradise.

The accompanying piano was executed with such speed that people cannot help think the Beatles used a harpsichord for this song.

While In My Life is a very beautiful ballad, there is some dispute over its authorship.

The sound is definitely that of Lennon.

However, if you listen to the overall sentimental quality of the piece, you get a hint of McCartney.

It is fitting and proper that this song is a true 50-50 collaboration between the two Liverpool boys.

I Saw Her Standing There

You might have misheard the ‘four’ in the opening countdown of this song for something else.

You are not alone.

Whether it is purely a British thing or intentional, there is no denying that the 1-2-3-4 countdown is a unique way to open a rock and roll hit.

You may also recognize the bass riff as the driving force behind I’m Talkin’ About You by Chuck Berry.

Despite these notable missteps, I Saw Her Standing There still managed to land on the 14th spot of the Billboard Hot 100.

We Can Work It Out

We Can Work It Out is one of the best examples of how Beatles members collaborate to create one fascinating song.

McCartney began writing the verses and the chorus of the song before handing it over to Lennon for the finishing touch.

It was not to be.

Harrison also had his ideas added into the middle of the song, giving it a German waltz.

Listening to the song, you will always have this eerie feeling that the lyrics is talking about the tiresome struggles that the Fab Four have been enduring all this time.