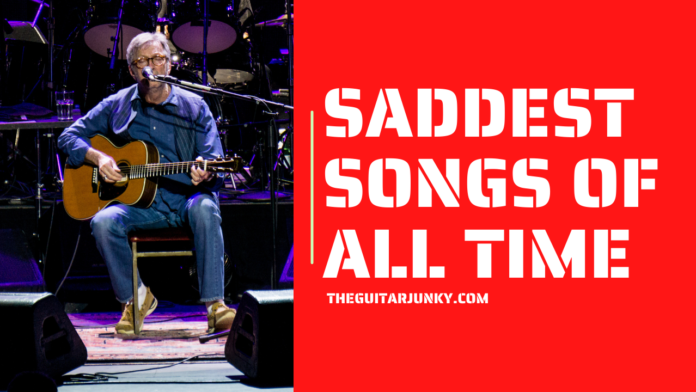 Let’s face it – we all have those days when everything feels a little too much, and the only way to overcome it is to get out a good cry.

And what better way to purge out your bad feelings than by listening to sad songs?

This article compiled the top ten saddest songs of all time, so you won’t have to go through the trouble of searching for them.

Whatever the reason for your sadness and melancholy may be, these songs guarantee quite a few tears.

Without further ado, here are the top ten saddest songs of all time.

Alice in Chain’s “Nutshell” is one of the group’s most popular songs and a staple in alternative rock despite not being released as a single, nor having charted.

During the initial release, the song only achieved mild success.

However, it suddenly surged in popularity after the tragic death of the band’s singer Layne Staley at a young age due to the fans seeing the lyrics from a new perspective.

In 2011, guitarist/singer Jerry Cantell started to sing the song as a tribute to the late Layne Staley and Mike Starr.

Queen’s “The Show Must Go On” is arguably one of the band’s saddest songs as it depicts the frontman Freddie Mercury’s struggles with HIV/AIDS.

During the recording in 1990, Mercury’s condition had already reached a point where it was difficult to stand and walk – let alone record a song.

The song was released six weeks before Mercury died and was first performed live in 1992 during Queen’s tribute concert to the beloved frontman.

Pearl Jam’s Black tells the story of first relationships and their inevitable demise.

With the public’s positive reception of the band’s debut album, Ten, their company advised the boys to release this song as a single.

However, Pearl Jam refused as they felt the song was too personal and making it a single would destroy its emotional weight.

Nonetheless, the song successfully obtained the third and twentieth spots on Billboard’s Mainstream Rock and Modern Rocks chart accordingly and became one of the group’s most popular songs.

John Prine’s Sam Stone hits right in the feels as it paints the story of a war veteran and his slow descent to his drugs.

The song is haunting with lyrics such as “there’s a hole in Daddy’s arm where all the money goes” with Sam eventually meets his tragic end after his last balloon in a “room that smells like death.”

Considered the most famous country song of all time, “He Stopped Loving Her” is George Jones’ first number one solo song after six years.

Here, Jones croons about a man who remains pining and loving his lost love until he died.

To make it melancholy, the woman attends the man’s funeral.

The song earned Jones a Grammy for Best Male Vocal Performance and became the Single and Song for the Year in 1980 and 1981.

Due to the song’s continued success, Jones was later inducted into the Country Hall of Fame in 1992.

“Something in the Way” features Kurt Cobain’s soothing vocals backed with an acoustic guitar, bass, drums, and a cello.

Many believe that the song referenced how Cobain hung out under the Young Street Bridge located in Washington.

Despite its release in 1991, the song only entered the charts in 2020 after it appeared in the movie trailer, The Batman.

The song then clinched the number two and number five spots on the Billboard’s US Rock Digital Songs and Alternative Digital Songs charts respectively.

This song is hurtful for parents as it talks about a young father unable to spend time with his son due to his demanding job.

The now-retired father experiences the same treatment when his son cannot spend time with him due to his job and family.

With its poignant lyrics, the song became Harry Chapin’s first and only number one song to top the Billboard 100.

The song was even nominated for a Grammy in 1975 and later inducted in the Grammy Hall of Fame in 2011.

Everybody Hurts (Automatic for the People, 1993)

In an interview, R.E.M.’s singer Michael Stripe mentioned that this song was their message to their teenage bands.

“Everybody Hurts” is one of those rare sad songs that encourage catharsis, recognizing that it is okay to be sad but to keep hoping for a brighter tomorrow.

The song achieved wide success, peaking at number twenty-nine in the Hot 100 and even being in the top ten in music charts in various countries.

In “Hurt”, Nine Inch Nails talks about heroin addiction and self-harm and was nominated for a Grammy for Best Rock Song in 1996.

The song quickly shot up in popularity when singer Johnny Cash decided to make a cover in 2002 for his album.

Cash’s cover then won the award for “Single for the Year” in 2003 and is dubbed as the greatest music video of all time.

In 1991, Eric Clapton’s son died after falling from the 35th floor of a building in New York.

The song first appeared in the movie soundtrack for Rush; however, many first knew the song in his 1992 album, Unplugged.

“Tears in Heaven” was an outlet for his grief as he wonders if his son will even recognize him in heaven due to dying at a young age.

This sad song earned Clapton three Grammy awards for Record of the Year, Song of the Year, and Best Male Vocal Pop Performance.

It also clinched the number two spot in the Billboard Hot 100 and listed in the top ten in various music charts around the world.

Hopefully, these songs were able to help you release all your negative emotions and have a good cry fest.

But remember, it’s just a bad day.  So after crying, smile, wipe away your tears and fight on.  You will get through this.