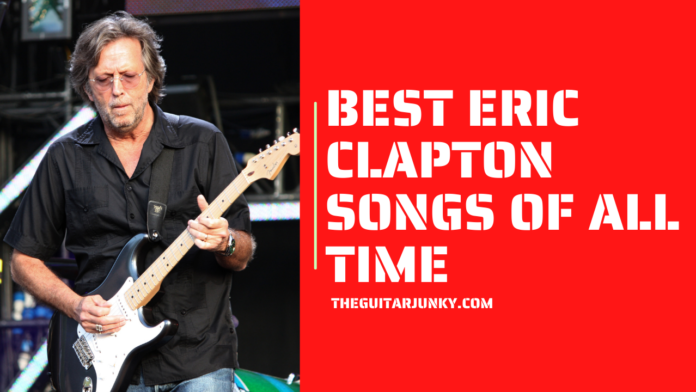 The rock icon Eric Clapton helped shape the music industry with these songs.

Eric Clapton flourished his talent and skill in music writing as part of a band and became a successful soloist over the years.

His songwriting style is unique and it draws raw and authentic emotion.

Listening to Eric Clapton songs can cover various seasons in one’s life, from longing and loving, to just simply lounging around the house, there is just a perfect song for whatever you are going through.

Although his songwriting and guitar-playing style has evolved, his genuineness in creating good music is what keeps his songs still relevant in today’s generation.

For decades, Eric Clapton has composed and recorded a hundred songs and even won him numerous awards.

Here are the best Eric Clapton songs that deserve a spot in your favorite playlists.

Waking up on a Sunday morning with Promises from Eric Clapton will ease your heart and mind.

This song has a positively relaxing vibe, especially with how the song is arranged.

Listening to the song intently will make you realize how it may not coincide with its melody since it is mostly about drifting apart and broken promises.

All Your Love (Blues Breakers with Eric Clapton, 1966)

All Your Love is a famous blues song that brings listeners together with its upbeat tune.

What makes this song a classic crowd favorite is the guitar solo that directly hits the hearts of his fans.

The song is a collaboration with John Mayall and the Bluesbreakers and has been noted to have one of Eric Clapton’s best guitar solos.

Hearing It’s Probably Me for the first time will give you a hint that it’s already with Eric Clapton, especially with his blues style, and mild guitar solo.

If you are into listening to a chill song with some funky notes, Lay Down Sally is the perfect song to hit on repeat.

This song proves how Eric Clapton is great with words, especially when convincing a woman to stay and hang out with him.

Lay Down Sally has one of his laid-back songs that still has signature guitar riffs that make his fans hit the replay button hard.

This song is among his funky covers that still have tiny hints of rock and roll.

I Shot the Sheriff was originally from Bob Marley, but Eric Clapton’s version is also a masterpiece on its own especially with how he incorporates his powerful voice and some soft rock in an original reggae song.

Eric Clapton did justice to the song, and it even topped charts shortly after its release.

Eric Clapton swayed his avid fans with Change the World and its deep meaning of unpretentious love.

He has ingeniously incorporated how someone would want the world’s best powers just to prove how big his love can get.

Change the World has an easy-to-follow melody, with a rhythm that makes you giddy throughout the song.

Eric Clapton proves his spot in the rock and roll industry with his song Layla.

This song has soft rock and blues, with strong lyricism on how he is in love with someone hard to have.

Layla has its meaning for Eric Clapton, and the fact that his dilemma with love is in this song holds so much power in how he brings life to his song pieces.

Eric Clapton has written one of the most heartbreaking songs to date, and that is Tears in Heaven.

This song was written with his son’s passing when he was only 4 years old, giving the song so much weight compared to the others.

After his son’s death, he went on hiatus and found himself writing this song while grieving his loss.

You can feel the actual longing and hurt in this song, especially with how the rhythm tugs heartstrings.

Every beat unravels Eric Clapton’s grief, and it is the best song to listen to when one has loved and lost someone.

Wonderful Tonight is one of Eric Clapton’s most iconic songs which features how he appreciates how fine his lover is on date night.

Even with the simplest lyrics, Wonderful Tonight shows sincerity and passion, just how Eric Clapton writes most of his songs.

The melody is perfect for slow dances, making the lyrics sink and gravitate more to one’s emotional side.

If there’s a song you can associate with Eric Clapton’s genuineness, Wonderful Tonight is the perfect one you should listen to.

Eric Clapton and his role in rock and roll manifest in his top song Cocaine.

It has the right rhythm that brings one to tap a foot and nod the head while it is playing.

The guitar riff is what brings this song to the edge of being his most listened to the song because it sounds cool and just brings his talent to the brim.

The song is about drug addiction as the title portrays, and it is something Eric Clapton is very familiar with.

Overcoming his drug problem was a turning point in his life, and this song just speaks so much about how he can compose and write great songs while being sober.

Eric Clapton has been one of the most notable guitarists, songwriters, and singers who have enjoyed the spotlight for years in the music industry.

He has his way of crafting music that relates to his own life and experiences and still keeps it very versatile.

His guitar solos are very interesting, and his signature rock tones have made an impact on today’s generation of rockstars.

Eric Clapton’s songs of love, life, despair, and daily musings captivate listeners, especially with his raw intention of expressing himself through music.

He is one of the best icons of rock and blues, and his songs will surely bring back memories.