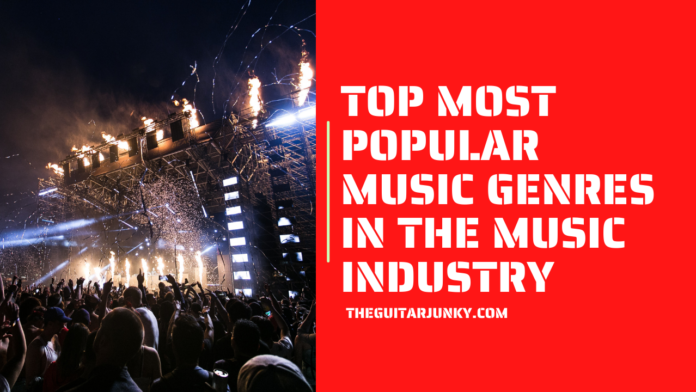 Music is therapy and it comes in different music genres to soothe the listener’s soul.

The top 10 most popular music genres in the music industry represent how the world listens to music in various types, as part of their everyday life.

Over billions of people worldwide listen to multiple genres, yet a few popular ones stand out.

Rankings on the most popular ones are based on how much a genre is streamed and how often their vinyl and CDs are bought all over the world.

There are a lot of rankings when it comes to music genres.

There are also a lot of factors on how a music genre can become popular, like one’s tradition and culture, the geographic location and influence of its neighboring countries, and the collective personality of the population as a whole.

A music genre evolves through the years, and its popularity can change from generation to generation.

Worldwide rankings have been collated in this list of the most popular music genres.

Here are the top 10 music genres that listeners all over the world love.

Pop music is living up to its name as the most popular music genre in the industry.

It is somehow impossible to skip listening to pop music because it is played all over radio stations, salons, restaurants, waiting areas, and in other urban and rural areas.

Pop music maintains its status as the world’s most popular genre with today’s generation of teens because of its catchy melody, appealing rhythm, and likable lyrics.

One of the reasons why pop music reigns supreme is its relevance to today’s culture and events, its element of surprise, and the artist’s influence.

Also Read: 10 Best One Direction Songs of All Time

Also known as rap music, hip hop is a popular music genre for its upbeat style and rhyming lyrics.

Hip hop is a versatile music genre such that it can be played during workouts, dance presentations, and just for casual listening.

Rappers have a unique talent in delivering well-versed lyrics at a cadence that not everyone can catch, and this makes this genre popular among the younger audience.

House music or otherwise known as EDM (electronic dance music) is proof of people’s creativity in creating music in the digital era.

EDM poses a welcoming feeling for everyone to enjoy, and this genre has taken over music festivals, making it more popular over the years.

This music genre is also versatile in a way that it can be danced at parties, played at festivals, and even in clubs.

Another thing that contributed to EDM’s popularity is its accessibility because it can readily be played on electronic equipment and sets.

Also Read: What Happened to LMFAO? The Iconic Duo Behind Party Rock Anthem

Rock’s popularity decades ago is still true to this day.

Rock is a music genre that encompasses various music subgenres including soft rock, psychedelic, afro punk, metalcore, and alternative rock, among others.

Compared to other music genres, rock loves to put excellent meaning in the lyrics, taking inspiration from societal issues and life struggles.

Aside from structured lyricism, rock also has a catchy beat, hence it was dubbed as therapeutic music by its avid fans.

RnB, short for rhythm and blues, peaked in popularity a few decades ago, yet this thriving music genre proves how African-American music is still very relevant in today’s list of popular music genres.

This music genre combines elements from other genres, making it a popular choice of music for those who are not focused on listening to a single music type.

Artists take pride in how indie music rose to fame with their efforts in showing talent, creativity, and resiliency in the music industry.

Some people previously did not consider indie as a music genre, but because of its popularity, its fans have considered it to be a unique genre where their favorite artists blend their melody, rhythm, and verses.

Compared to other genres, indie music is less restrictive when it comes to lyricism, and there is no concrete delineation as to its beat.

Asia’s music from South Korea rose to fame because of its unique personality in the music industry.

Kpop or Korean pop music has set its name on stage from various boy and girl groups that showcase the Asian culture and music ranging from ballads, rap, and other music genres.

Individual singers also play a tremendous role in the Kpop music industry, and its engagement has spread from one country to another through various social media platforms and music streaming sites.

Music transcends language, and Kpop is proof of how the world can accept music in all forms and origins.

Country music’s popularity stems from how it is structured and that it has emotional content, captivating its listeners all over the world.

Songs from this music genre often have a story to tell, and its short but sweet meaning leaves the audience with a heartwarming feeling after.

The genre’s simplicity lends its spot on the popular genres and it has stayed in the top list for years.

Latin music has a unique upbeat vibe, distinct from other genres, and it sets the Latin and

Hispanic community is a spot for the world to hear.

Ground-breaking artists paved the way for Latin music to spread beyond its borders, introducing their beat to the other side of the world.

Streaming sites further strengthened Latin music’s popularity, and its reach to various places has ingrained a part of their culture to their listeners.

Classical music has a spot in the popular genres for its musical elements not found in other genres.

Classical music holds raw emotions and its collection of songs are timeless pieces of art put together.

Even though orchestras are not that common nowadays, classical music is still widely used; it is also popular among studying students, young adults, elderly.

This music genre is known as the brain’s best friend because it has many health benefits.

Popular music genres give artists and producers a clue of how the world takes up music as part of everyday life.

Listening to any music genre is therapeutic, and its popularity is a bonus as a preview of what people love to listen to.