10 Best DMX Songs of All Time 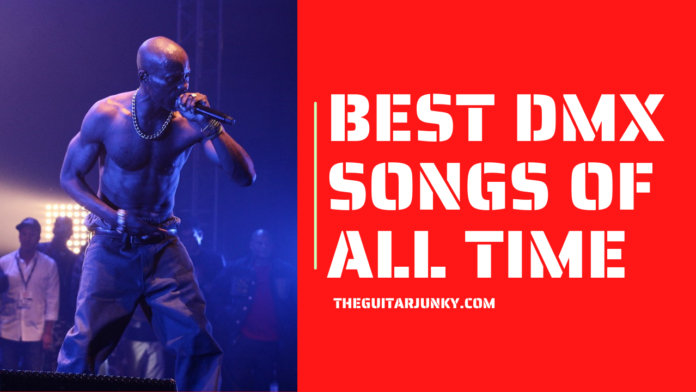 The best DMX songs continue to inspire contemporary artists, rappers, hip-hoppers, and almost anyone who grew up listening to his brand of music in the closing years of the 20th-century.

Diehard fans point out DMX’s rare feat – topping the Billboard 200 charts not only once or twice, but five consecutive times.

A master of breath control and space, DMX proved to critics that even rappers deserve the respect of the music-crazed world.

In this article, we will look at ten of DMX’s best songs still enjoying substantial airtime on Spotify.

While not everyone will appreciate the angst in his music, this song still managed to earn the nod of fans and music experts alike.

Nevertheless, it gained Gold certification from RIAA while also landing in the magic circle of 100 in Billboard’s Hot 100 at the 67th spot.

This conscious hip hop is a testament to DMX’s humanity, showing his softer side few fans know.

Unsurprisingly, audiophiles fell in love with his song, which many Spotify users still do.

It may have taken Slippin’ almost two decades before reaching Gold status, but it did peak at number 30 on the UK Singles Chart and 60th on the Billboard Hot Hip Hop/R&B Songs.

DMX’s presence is unquestionable in this hit, with the rapper letting it all out in one mighty performance.

Featuring Sisqo, What These Bitches Want enjoyed rave reviews from all fronts.

It reached the Billboard Hot R&B/Hip Hop Songs chart at the eleventh spot.

The song also landed on the Billboard Rhythmic and Hot 100’s 29th and 49th positions, respectively.

X is already expanding his catalog around this time, providing listeners with every bit of his unique personality as a rapper.

The video is memorable, showcasing the two boys’ wild side as they wreak havoc in a bar.

A hit track on the Hollywood film, ‘Cradle 2 the Grave’ starring Jet Li and DMX, Go To Sleep is a collaboration between DMX, Eminem, and Obie Trice.

The trio found it necessary to create a diss track to silence two of the group’s erstwhile nemeses, Ja Rule and Benzino.

Although the Ruff Ryders’ Anthem (Re-recorded) is a DJ Clue? cover of X’s phenomenal hit of the same title, it did feature DMX and a few other rappers and hip-hop artists of the time.

This song achieved double Platinum status and peaked the Hot R&B/Hip-Hop chart at the 16th position.

Like many of DMX’s songs, this swagged-out version of the original featured in Call of Duty: Warzone and GTA: Liberty City.

While the song only managed to peak at the 93rd spot on Billboard’s Hot 100, Ruff Ryders’ Anthem reached number 16 in April 2021 after DMX’s untimely demise.

X went all out in mixing Atlanta and New York musical influences in a song that nobody ever heard before.

It came complete with a distinct hook a military cadence-like rhythm, providing the vocals with a  structured platform.

The 2021 re-released version peaked the Hot R&B/Hip Hop chart at the ninth spot.

Unapologetically powerful, Where The Hood At is one of DMX’s most enduring songs, gaining more than 193 million streams on Spotify.

Available in clean and explicit versions, the song can be energizing to listen to, complete with its heart-thumping beat and lyrical bashing from X.

The song is a Platinum-certified hit in the US and Silver in the UK while also landing on the fourth spot on the UK’s R&B chart.

Where The Hood At peaked at the 13th slot of the Hot Rap Singles and the number 68 position on the Billboard Hot 100.

The shrieking whistles and pile-driving synths of this song are like an air raid siren screaming over the streets of World War II London.

It is an exceptional hit, made more memorable by the creative partnership between Swizz Beatz and DMX.

Overflowing with expletives, the artists decided to release Party Up in three versions: explicit, censored, and radio/video.

Regardless of which version you listen to, you can feel X’s energy in the lyrics and composition.

The song earned a Grammy nomination, ultimately losing to The Real Slim Shady.

This song is one of X’s most commercially successful songs, reaching the 2nd spot on the UK R&B chart and earning a double Platinum from RIAA and another Platinum from the UK’s BPI.

It is also certified Gold in Italy and Denmark and has consistently ranked in the Top 100 of at least thirteen countries.

Not only is this X masterpiece did surprisingly well on the airwaves, but it also earned the admiration of video game developers and Hollywood bigwigs.

Forza Horizon 3, Def Jam Vendetta, and Resident Evil 2 are a few of the video game titles where X’s phenomenal hit was included as a soundtrack.

Fans of Deadpool 1 and 2 will also remember this track.

The best rapper and hip-hop artist the music kingdom has ever seen may be gone, but the best DMX songs continue to excite.

A few minutes on Spotify’s DMX-dedicated playlist is enough to stir the rapper and hip-hop persona in every audiophile.