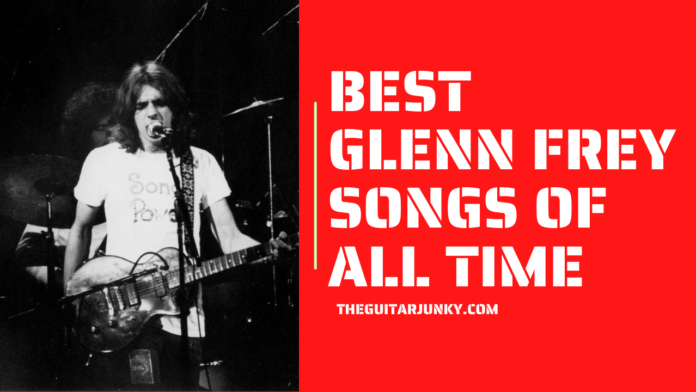 The Eagles’ frontman may already fly with the angels in heaven, but the best Glenn Frey songs still lord the Spotify airwaves.

Singer, actor, and songwriter, Glenn Frey also played the keyboards and guitar to give this Eagle the wings to soar above the rest with hits like The Heat is On, Lover’s Moon, Smuggler’s Blues, and Partytown.

Although Frey never got the same accolades as the Eagles (as a band) did, Glenn was nevertheless successful in forging his path and earning a vote in Michigan’s Rock and Roll Hall of Fame.

In this article, we will relive ten of the best Glenn Frey songs.

Hopefully, it will give you an idea of how an Eagle can soar high solo.

It was Nat King Cole who first recorded this song in 1946, captivating a US audience so enamored with the artist’s golden voice.

In 2012, Glenn Frey included the song in his After Hours album as a tribute to some of the music kingdom’s greatest hits.

For Sentimental Reasons (After Hours, 2012)

The song’s biggest hit came from The King Cole Trio in 1946, staying in the Billboard Best Seller’s top spot for several weeks.

Who would have thought that Frey believes in true love’s eternal nature, although True Love’s theme may not be what you think?

Frey could not shake his Al Green obsession that he included this song in his third studio album.

The song is a soft rock classic, transporting listeners to an era where love songs dominated the airwaves.

It peaked at the second spot of the Canadian Singles and the Billboard Adult Contemporary charts before landing on the 13th position of Hot 100.

Bagging fifth place on Billboard’s Mainstream Rock Tracks in 1982, Partytown features a funky vibe, a catchy tune, and danceable lyrics that will have everyone heading to the dancefloor.

It is easy to see Frey’s command of the guitar, especially when he performs the guitar riffs of the song with the backing of the drums.

Unsurprisingly, this song still enjoys considerable exposure on major streaming platforms such as Spotify and iTunes.

Part Of Me, Part Of You has the classic slow rock structure that people of the early 1990s love – a stark contrast to the thriving grunge music from the American Northwest.

The song peaked at number seven on Billboard’s Adult Contemporary chart, 9th on Mainstream Rock Tracks, and 55th on Hot 100.

With the characteristic elements of 1980’s rock and roll, Smuggler’s Blues has a bluesy vibe in a danceable tune.

Number 12 on the Hot 100 and 13th on Mainstream Rock charts, Smuggler’s Blues became an overnight sensation.

It prompted Miami Vice to use the song in their 16th episode and name it after Frey’s successful piece.

You Belong To The City (Miami Vice Soundtrack, 1985)

Don Johnson and Philip Michael Thomas’s exploits in the Miami crime world would never be complete without You Belong To The City providing the suspenseful music background.

It is one of Frey’s most successful songs as a solo Eagle, peaking at the second spot of the Hot 100 and topping the Top Rock Tracks.

The song also snatched the third spot on Cash Box and lingered in the number two position in the US and Canada’s Adult Contemporary charts.

You Belong To The City showcased Frey’s phenomenal musicianship, playing all the instruments except the synths, drums, and sax.

With its relaxing melody, Lover’s Moon makes for a laidback listening experience.

While it did not enjoy the accolades of Sexy Girl, Smuggler’s Blues, and The Heat Is On, this song still managed to win the hearts of contemporary audiophiles.

It reached number 18 on radio charts while also peaking at 69th on iTunes.

On Spotify, Lover’s Moon has the nod of more than 14 million streamers, proving to everyone that cheesy lines and a mellowed beat can still be an instant hit.

A favorite of couples in love and those desperately trying to prove themselves to someone, The One You Love is a soft rock that borders on smooth jazz.

Contemporary audiophiles may find the beat too lazy and the lyrics cheesy, but there is something magical in Frey’s voice.

It is the perfect track for quiet afternoons with your loved one or a fascinating backdrop to a candlelit dinner.

The song reached Canada and Billboard’s Adult Contemporary charts at the number two spot while also landing on the 15th place on Hot 100.

Even though you are not an Eddie Murphy fan, there is no denying the danceable tune of this chart-busting song.

The sax riff provides an excellent framework for the song’s guitar, synth, and steady drumbeat.

You have got to love Frey’s fingerstyle as he provided the rhythm and melodic structure to the song that will propel Murphy to greater heights.

It skyrocketed to the number two position on Billboard’s Hot 100, bested only by REO Speedwagon’s Can’t Fight This Feeling.

Still, this Glenn Frey music managed to earn the accolades of Australian, Norwegian, Canadian, and West German audiophiles and music bigwigs by landing on the Top 10 charts of these countries.

The songs may not have the oomph of contemporary rock, but they can still provide a pleasant listening experience.