What Genre is Frank Sinatra’s Music? 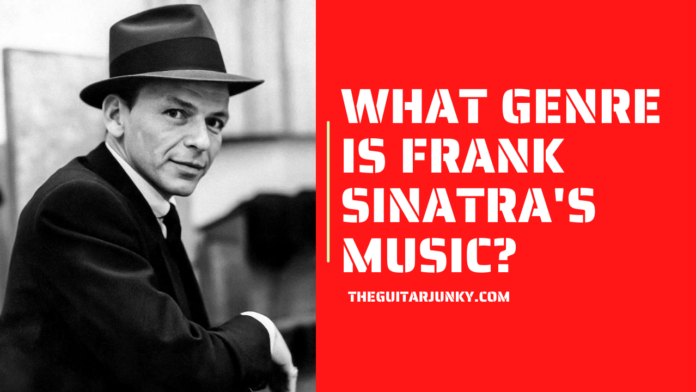 Sinatra’s music is commonly called “pop”, but in my opinion that’s not entirely accurate. Sinatra was a successful pop singer and actor.

I believe his style can best be described as “American popular”, a form of American music that has its roots in several musical styles including jazz, blues, folk and pop.

In this article, I’ll be discussing Frank Sinatra’s genre, which is traditional pop, and what makes it different from modern popular music and other genres.

I’ll also be discussing what got Frank Sinatra to be known as the greatest American singer of popular music in the 20th century.

What is Traditional Pop?

Traditional popular music is generally known as music written and produced after the big band or jazz era and somewhat before or during the rock and roll genre era.

At that point in time, songs were written by professional songwriters, who often have their original lyrics sung and performed by a professional vocalist or vocalist of their choice who is always grouped with an orchestra or small combo.

Traditional pop artists may also connote to the orchestra leaders or arrangers that managed the assembly of instruments to support the vocalist and his/her performance.

The Evolution of Pop Music

Traditional pop tunes, as mentioned previously, had come after the “big band” or jazz era, but it’s not to say that jazz did not influence traditional pop music at all.

Initially, jazz had originated from Ragtime, a kind of music popular in the African-American communities in the early 2oth century. Ragtime evolved into Swing music, which then evolved into jazz.

Jazz music is composed of a multitude of instruments, much like an orchestra, thus being also dubbed as “big band”. It’s known for its improvisation, where each instrument shines as equally as the other.

Eventually, Blues and Country music became more and more popular together with jazz music, and both genres somehow combined and blended, becoming “Rockabilly” music around the 1930s to early 1940s.

Later into the 1940s, crying and emotional singers became the pioneers of what was then known as the genre of popular music, and is now dubbed as traditional pop music.

In the 1950s, artists like Elvis Presley, Frank Sinatra, and Peggy Lee became renowned among the younger generation, paving the way for later artists in the same genre.

Eventually, younger generations became the target market for much more recent music, such as the Beatles and the Beach Boys in the 1960s, the realization of pop-rock music in the 1970s credits to artists like Elton John and the Jackson 5, and the quick rise of disco music and dance-pop artists like Michael Jackson, Prince, and Madonna in the 1980s.

The rapid evolution of technology helped with the formation of pop music as well, as the younger generation found it more convenient to listen to popular music with their portable radios and boomboxes, to eventually having digital music available to listen to dance-pop tunes.

What Makes it Similar to and Different from Modern Pop?

In a way, traditional pop music is similar to modern pop music in the way that it utilizes the song to convey certain messages, depending on its target market.

Traditional pop music used to sing about love, loss, and emotions, but was also able to evolve by singing about specific and general problems, like individual struggles and world peace in a poetic manner.

Traditional pop music artists like Frank Sinatra, were able to sing songs that his target market was easily able to relate to, such as champagne, parties, and even love affairs.

In this manner, traditional pop is very similar to modern pop, as modern pop artists also often sing about money, love affairs and stories, parties, and sometimes drugs, all of which appeal to most of the younger generation.

The key difference between traditional pop music and modern pop music lies in the instruments used to produce music, as well as the influence of the most recent pop music.

Traditional pop music, as mentioned earlier, takes heavy influence from both jazz and rock and roll, but the second decade of the 21st century has found its popular music to take great influence from Rap and Blues (R&B), thanks to artists like Rihanna and Eminem.

What Makes it Different from Jazz?

Jazz music is a type of music that has also evolved or taken great influence from classical music, wherein whole orchestras play music that has been set.

Jazz music, on the other hand, is a type of music that relies on the improvisation and syncopation of different musicians who come together to play a piece that has not been written or arranged in any way.

Pop music, as explained earlier on, is music that requires professional vocalists to sing songs written by professional songwriters, and these vocalists collaborate with orchestra leaders or small combos to come up with arrangements to be able to bring a good tune to the song.

What Made Frank Sinatra the Greatest American Singer of the 20th Century?

One of the greatest things that helped earn Sinatra the title of “Greatest American Singer of 20th-Century Pop Music” was his warm, baritone voice and ability to understand and properly deliver the lyrics.

Eventually, Sinatra sought improvement by practicing his voice to match that of a trombone’s melody, allowing him to sing pleasantly, seamlessly, and in an unbroken manner.

Later in his career, Frank Sinatra’s skills were what most bands adjusted their performance to, allowing him to shine and be the focus in all his performances, as he was also able to wonderfully perform a variety of ballads and up-tempo music.

Frank Sinatra, entitled as the Greatest American Singer of 20th-Century Pop Music, sang what was then known as popular music.

He sang songs that his target market – which was the upper class – was easily able to relate to: parties, love affairs, champagne, and a good life in general.

Pop music has evolved since the age of Frank Sinatra, and had it not been him and other artists in the genre, we wouldn’t be listening to artists like Taylor Swift, Fallout Boy, and Maroon 5 now.

What do you think of this article?

Let me know in the comments below!