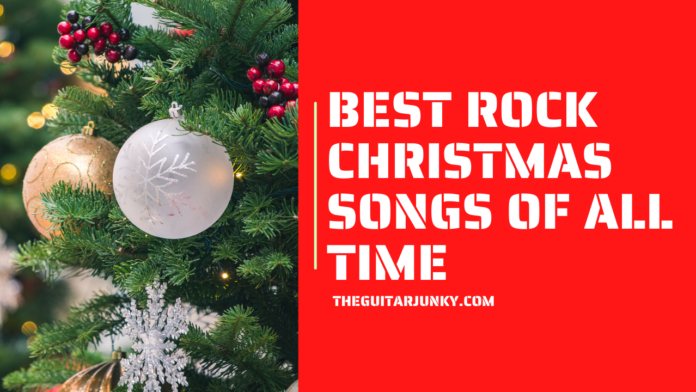 You can forget Jingle Bells, Santa Claus Is Comin’ To Town, Christmas All Over Again, and all the other Holiday season rock songs.

Initially titled I Wish It Was Christmas Today, Christmas Treat was a favorite sketch on Saturday Night Live penned by Jimmy Fallon and Horatio Sanz in 2000.

Like other rock Christmas songs, Christmas Treat has a lively beat suitable for setting a festive mood around the Christmas tree.

John Lennon wrote this protest song in 1971 with the Plastic Ono Band, becoming a Christmas standard a few years later.

It is not uncommon for artists of different genres to cover this song, including the rock band Shinedown.

While many artists covering Happy X-mas (War Is Over) included it in their albums, Shinedown decided to release it as a non-album single.

The message is omnipresent, complete with the electrifying sound of guitars, drums, and synths that give the song an edgier vibe.

Corey Taylor’s X-M@$ is a non-album single that peaked the Billboard Mainstream Rock chart at the 37th position and the Hot Rock & Alternative Songs chart at 42nd.

The Slipknot frontman used heavy metal and hard rock inclinations to deliver a song worthy of any rock Christmas playlist.

The world first heard Sleigh Ride in 1948, although it was more of instrumental music, not a song.

The Ronettes were the first to give Sleigh Ride a voice in 1963 before other artists started picking it up, including Gwen Stefani, Mariah Carey, and Ella Fitzgerald.

The rock version of Sleigh Ride is a favorite of hipsters, yuppies, and Millennials who have outgrown the ordinary way of delivering the piece.

This song’s message is loud and clear: no pandemic is going to dampen the true spirit of the Holiday season.

Twenty One Pilots wrote and recorded the song to deliver a message of hope to a world stricken by the COVID19 pandemic.

The song was an overnight sensation, landing the 34th spot on Billboard’s Holiday Digital Songs and 35th on the Hot Rock & Alternative Songs.

Not bad for a song made in desperate times.

Fans of Home Alone’s Kevin McAllister (Macaulay Culkin) will love this 21st-century rock rendition of the 1990 soundtrack that became the anthem of many Christmas school concerts, professional choirs, and seasoned orchestras globally.

It is a fun and lively take on a Grammy and Academy-nominated song, complete with a Beatlemania rock vibe.

The song starts slowly with a military cadence-like drumbeat before picking up the pace until you start bobbing your head and tapping your feet.

Although the original score did not top the charts, You’re A Mean One, Mr. Grinch bagged the Grammy’s for the Best Album for Children in 1968.

Half a century later, the Small Town Titans gave the classic a much-needed revamp in keeping with the times.

This Christmas alternative-rock song is a modern interpretation of Pyotr Ilyich Tchaikovsky’s Act II music for the 1892 classical masterpiece, The Nutcracker.

It has the elements of an alternative rock hit, infused with the season’s message, and delivered in a platform many modern audiophiles can relate to instantly.

The Our Last Night-Cole Rolland collaboration is a perfect example of what cooperation can bring into the world of music.

We all know the Mariah Carey version of this enduring Christmas classic – a true winner in every sense.

What many of us do not know is that a trio of pop-punk lads from sunny California is out to remake the Guinness World Record-holding song, giving it a new and exciting twist.

Point North’s version of a timeless classic is nothing short of ingenious, something that other artists did not mind doing.

At least, punk rock fans will never feel left out as the Holiday season rolls in.

All I Want For Christmas Is You (My Chemical Romance, Christmastime in the 909, 2004)

It is not surprising many artists love to cover Mariah Carey’s 1994 hit Holiday song, All I Want For Christmas Is You.

After all, the song has three Guinness World Records, multiple Platinum certifications in at least a dozen countries, and topping the charts of at least 15 nations.

From Justin Bieber to Michael Buble, Shania Twain, Dolly Parton, and hundreds of other artists, it was only a matter of time before alternative-rock band sensation, My Chemical Romance, joined the fray.

They did in 2004, and their cover also joined other Christmas rock songs in the 2009 compilation album, Gift Wrapped – 20 Songs That Keep On Giving.

The best rock Christmas songs on Spotify may not have record sales and awards to brag, but they can bring a festive spirit to the Season still marred by the ongoing pandemic.

Having these songs in your playlist is a must if you want to turn your bleak Christmas into something more hopeful and magical.