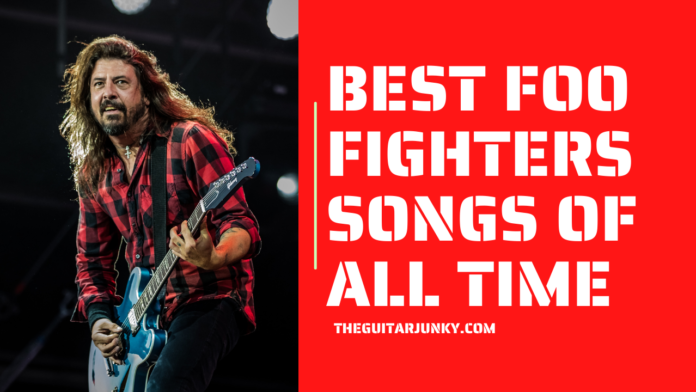 One of the most enduring guitar-heavy rock bands in the world had its conception from a bunch of demos David Grohl — Nirvana’s famed drummer, recorded on his own in 1994.

With over twenty-five years being in the business, hit after hits are made, charts are conquered, and bagging twelve Grammys on the way to concerts filled to the brim with fans;

Foo Fighters have no plans of holding back and slowing down.

It’s proven to be challenging to narrow this list to ten of the Best Foo Fighters Songs, but we tried, and here they are.

David Grohl described this song as one of the best he has ever written.

Times Like These is the breakout single of the album One by One by Foo Fighters released in 2002.

A song was written when the band’s future was uncertain, David Grohl espouses the importance of striving amidst adversity, a universal message that resonated well with generations of listeners.

Monkey Wrench is the first song in The Colour and the Shape album released by Foo Fighters in 1997;

Topping up at number 9 on the Billboard Mainstream Rock charts.

David Grohl was a triple threat in this track, playing the guitar, singing the vocals, and drumming before Taylor Hawkins became the band’s permanent drummer.

According to Grohl, this song is about finding out that you are the root cause of the problem in a relationship and having the courage to weed yourself out before destroying you and the other person you love so much.

Everlong is inarguably one of the most famous and recognizable Foo Fighters songs.

In this case, we’re talking about the acoustic version that David Grohl said had given the song a rebirth.

Generally performed with electric guitars, the song gained a new life in an impromptu David Grohl performance on the Howard Stern radio show in 1998.

Since becoming popular, it has been part of the band’s extensive repertoire sang at concerts.

Walk earned Foo Fighter’s two Grammys for the categories Best Rock Performance and Best Rock Song — a feat considering Walk has no physical release; it is only a single downloadable digitally.

The song also has a fantastic music video that won a V.M.A. for Best Rock Video in 2011.

This song is a part of the Wasting Light album released in 2011.

Foo Fighter’s Walk was also played in the 2011 Marvel superhero movie Thor on the bar scene.

My Hero is a song from Foo Fighter’s The Colour and the Shape album, released in 1997.

Peaking at number 6 on the Billboard Alternative Songs chart in America.

Many people have been speculating that the song was about David Grohl’s former Nirvana band member Kurt Cobain but the rockstar would sheepishly pause and mutter a ‘maybe’ after a second.

David Grohl has said that this was written about the heroes in his life: ordinary, everyday, and trustworthy people, something we could relate to.

All My Life is the first song on the Foo Fighters album One by One, released in 2002.

It won them a Grammy Award for the category Best Hard Rock Performance, and the track spent ten weeks at the top of the Alternative Songs chart, also reaching number 3 on the Hot Mainstream Rock and top 5 on the U.K. Singles Chart.

Q Magazine listed All My Life at number 94 for their 100 Greatest Guitar Tracks.

Learn To Fly is David Grohl’s least favorite track from the album There is Nothing Left to Lose, but it is also the first single from Foo Fighters that entered the Billboard Hot 100, landing at number 19.

It entered no. 1 on the Alternative Songs chart and no. 2 on the Mainstream Rock chart, winning the 2000 Grammy Awards for Best Short Form Video.

One of the most radio-friendly tracks from Foo Fighters’ repertoire, this song is about searching for inspiration and for things that will make you feel alive.

This song by Foo Fighters almost did not see the light of day and was shelved for a long time, only being played once on the campaign trail to vouch for the Democratic nominee John Kerry, if not for the band’s manager asking where the song went.

Best of You is the first track on the band’s 2005 album In Your Honour.

David Grohl talks of how the song was about breaking away from things that confine a person.

The song landed on multiple best charts, gaining Foo Fighters another Grammy nomination under their belt and being memorable enough that Prince covered it for his halftime show at the Super Bowl in 2007.

In just a month, Foo Fighters developed their 2007 album Echoes, Silence, Patience, and Grace (which won the Grammy for Best Rock Album) and still managing to create The Pretender, one of the most successful songs in their arsenal.

The song garnered Foo Fighters a Grammy nomination for not just Best Rock Song (which they won) but also Record of the Year at the same time.

This track also beat Red Hot Chilli Peppers’ Scar Tissues’ record of being the longest-running number 1 Rock song on the charts with an 18-week run of its own.

Only being beaten by Muse’s Madness after five years in 2012.

There’s no asking why Everlong is the best Foo Fighter song to date.

First dropping on The Colour and the Shape album in 1997, this song has grown with time.

It is a song about the universal feeling of excitement and shyness, the giddiness of falling in love for the first time, and the butterflies that come with it.

This song is so much about love that a string quartet version of Everlong was played on F.R.I.E.N.D.S. as two of the protagonist, Monica and Chandler, got married.

Foo Fighters is proven to have aged with time, unlike their contemporaries, as their most recent tracks are still revered by fans new and old.