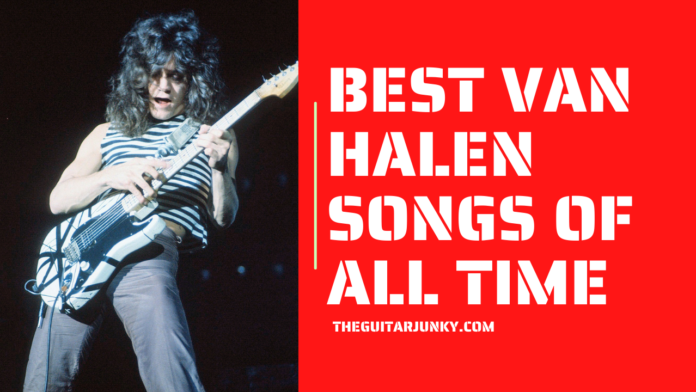 Van Halen is defining in a lot of ways. The band redefined and rewrote the rules of hard rock.

At the same time, Eddie Van Halen pushed the boundaries of what an electric guitar could do.

David Roth Lee’s flair for the dramatics in his performance opened the avenue for a more glam hard rock rockstar.

Together, the showmanship and the technique made Van Halen the most famous rock and roll band of the late 70s and the early 80s.

Whether you’re a fan or just dipping your toes into the wonders of 80s hard rock, here are some of the Best Van Halen Songs to ever be played on the radio.

Dance the Night Away is a track on their 1979 album Van Halen II.

Heavily inspired by Fleetwood Mac’s Go Your Own Way, this track was made as they hummed together on the studio, supposedly the only track made for the album.

The song is Van Halen’s first entry into Billboard Hot 100, landing at 15 that year.

Loathed by fans and beloved by casual listeners, Can’t Stop Lovin’ You is Van Halen’s most pop-sounding song to date.

A song featured on Balance — the band’s tenth album released in 1995.

This song is Van Halen’s last track to reach the Billboard Hot 100, topping out at 30 the year of its release but being the 94th biggest hit worldwide in 1995.

Since replacing David Lee Roth as the band’s lead vocalist, this is Sammy Hagar’s first song being a Van Halen vocalist.

The song catapulted Van Halen’s 5150 to the top of the charts, owing to its spot of number 3 in the Billboard Hot 100.

The song came out of Van Halen’s self-titled record.

Starting with a bit of drum roll, then giving you more than a minute of what Van Halen has been known for: popularizing the guitar technic two-handed tapping.

Eddie Van Halen’s Eruption is considered one of the best guitar solos ever.

A cover of The Kinks’ original song was released in 1978 for their self-titled album, Van Halen.

You Really Got Me catapulted the band to fame as it was released as a single before dropping their album mere days later.

A Nissan sports car advertisement featured Van Halen’s version of the song with a G.I. Joe action figure stealing Barbie from Ken and driving off in a Nissan with her.

It’s one of the few songs Sammy Hagar was willing to perform from the David Lee Roth-era of the band.

Ain’t Talkin’ ‘Bout Love was said to have laid the foundations of what to be known as 80s hair metal.

Hot for Teacher is probably the most recognizable song from Van Halen.

People will remember it for the music video that MTV played for a million times in 1984 (the album it belonged to also aptly named 1984) — classroom turned into a strip club, the band members made into kids dancing around crazily.

VHI named Hot for Teacher the 36th Best Hard Rock song of all time, Rating at 23 on the Billboard charts in 1984.

The fourth song on the list belonging to Van Halen’s self-titled first album, an album so influential it peaked in the Billboard 200 at number 19 and sold 10 million copies of the album in the United States alone, Runnin’ With the Devil.

VH1 also named it as one of the best hard rock songs of all time.

It’s inarguably the best opening to a debut album since, telling people exactly who they are with killer guitar solos by Eddie Van Halen, vocals by David Lee Roth, and blaring horn sounds connected to the bands’ cars.

There are arguments about the lyrics, one even misinterpreting the song being satanic; nonetheless, it’s a banger, and everyone seems to think so.

Panama, a song about a fast car called Panama Express, according to an interview with the band’s own David Lee Roth, is a single for the apropos named album 1984.

The song is inspired by AC/DC’s three-chord rock style.

You can even hear the spur and rev of a 1972 Lamborghini Miura S on the bridge, belonging to guitarist Eddie Van Halen.

This is featured in the intro video and gameplay of the video game Gran Turismo 4 and most notably on the hit show Family Guy where Peter mistook Van Halen’s 1984 album for George Orwell’s dystopian masterpiece with the same name and ended up falling in love and getting addicted to this song.

The most streamed song in the lineup is Van Halen’s Jump.

It’s the lead single of the 1984 album 1984 that catapulted Van Halen to hard rock royalties and has since then remained their most famous song, landing at number 1 on the charts.

Since then, the keyboard and synth-heavy single has been a sporting anthem played on Olympique de Marseille games when the players enter, and as part of the goal-hitting traditions by football team A.C. Milan and basketball team Detroit Pistons, to name a few.

Aside from being a part of VH1’s 100 Greatest Songs of the 1980s, this song has also been listed by the Rock and Roll Hall of Fame and Museum as one of the 500 Songs that shaped the genre.

Jump has also been nominated in the Best Rock Performance category on the Grammy Awards in 1984.

Listening to a Van Halen track would transport you back to the basement bar of the 70s, the band playing in front of vibrating amplifiers, and a crowd of sweaty leather jacket-clad fans having the time of their life. Good times.