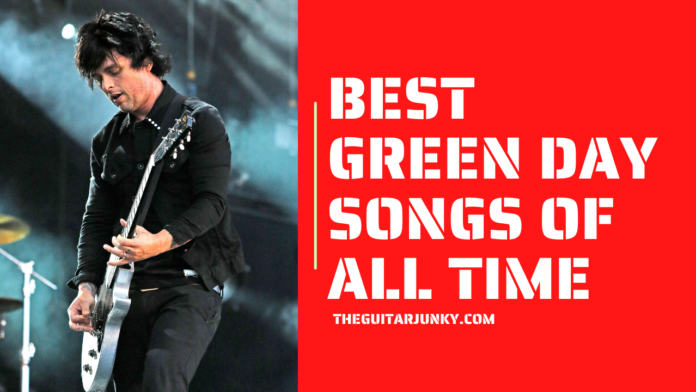 For the 90’s kid, rock music won’t be complete with the band Green Day with its lead vocalist and guitarist Billie Joe Armstrong.

Their songs are full of raw power composed of punk with a touch of melodic pop and with lyrics that all troubled and restless American teenagers can relate to.

Listening to the best Green Day songs is like going back to high school, discovering life, anger, death, and being an adolescent thriving to survive.

While being completely relatable, Green Day’s music can also make you feel excellent about life despite the gray areas surrounding it.

In this article, we’re going to look back to the best songs of Green Day that made us mad, frustrated, happy, and generally human.

The new generation can be introduced to this 90’s rock band and all their best songs because nothing can compare to a Green Day song.

One of the Green Day songs with a lighter and positive message is Still Breathing. It is an expression of gratitude in a universal sense.

For writer and lead singer Armstrong, who had his share of struggles like substance abuse, this song tells how life can become extremely humbling.

You fall, but there are always ways and reasons to stand up.

The band hoped that as much as people were relating to all their other songs, this one could teach a valuable lesson and make a difference as you live life with a humble and grateful heart.

Welcome to Paradise V2 (initially recorded for Kerplunk, 1992 then re-recorded for Dookie, 1994)

Co-written by Armstrong, Tré Cool, and Mike Dirnt, this song shares how the band moved out of their parents’ house when they were younger.

They moved to an abandoned house in Oakland along with several other musicians and other people and under one roof, they all lived together without paying rent, but this became home for them.

Another song from Green Day’s concept album is the continuation of the life of Jesus of Suburbia, the protagonist of the entire album.

This segment tells the tale of another broken home and its lasting effect on its so-called family members.

The lyrics are catching and 100% relatable as someone who is simply existing but not living.

It is a musical story of how Jesus decided to break free, run away, and start a new life.

It can be interpreted as a pursuit for hope and a better life, and that doing so is one the hardest you can ever do.

Another very personal song again for Armstrong tells the story of taking it slow when it comes to relationships and long-distance relationships.

Armstrong wrote this for then-girlfriend and now wife Adrienne Nesser and the difficulties and frustration of being away from each other as he and the band tours.

Although the challenges of being away from each other are very apparent in the song, it also becomes his love affirmation – telling the world that he will make it up when he does have the time to be with her.

This is another Green Day song that can strongly relate to the young ones.

It again highlights Jesus of Suburbia and revolves around loneliness and the loss of hope.

It gives the message that the American dream can sometimes be your biggest disappointment and when this happens, you are at your lowest, and the feeling of being alone is strong.

This song won a 2006 Grammy for Record of the Year thanks to its extreme and upbeat guitar beat for such a dark and depressing theme.

Not about anger or loss, 21 Guns is a song about patriotism.

The song intends to persuade one of the parties to put down their weapon and end the fighting and ultimately, it is intended to bring back the peace that everyone is after.

Armstrong acknowledged that the song’s title is in direct reference to the customary 21-gun salute, a way of honoring a fallen hero.

This song was nominated for two Grammy’s and was used as one of the songs in Transformers.

This song is highly the “punkiest” of all Green Day songs.

And unfortunately, most listeners misinterpreted this song and thought of it as a pleasant remembrance of past successes.

This is, in fact, a bitter and angry song about Armstrong’s GF, who moved to Ecuador.

Good Riddance has been used as a soundtrack in many TV shows, including in ER when a cancer patient died and during the series highlight episodes of Seinfeld in 1998.

Wake Me Up When September Ends (American Idiot, 2004)

One of the most personal tributes in the American Idiot album, Wake Me Up When September Ends, is Billie Joe Armstrong’s song about his father.

His father died from esophageal cancer on September 1, 1982, and after the funeral, Billie’s mother knocked on his door and responded with, “Wake me up when September ends.”

Armstrong dubbed this song as the most autobiographical that he had written that while the process was therapeutic for him, it was also the most challenging song to perform.

So far, this has been the band’s most well-received and successful song in the adult contemporary audience.

The title track of Green Day’s seventh studio album, this song has cemented Green Day as a US rock band.

This signature song is being used until now, when there are some political challenges in the US.

American Idiot tells the life story of Jesus of Suburbia, a typical lower-middle-class US adolescent antihero.

It is a song admittedly, written out of anger, but all the same, it was received well by the public and was nominated for 4 Grammy awards in 2004: Best Music Video, Best Rock Performance by a Duo or Group with Vocals, Record of the Year, and Best Rock Song.

It is a song that talks about anxiety attacks, panic disorders, and generally the feeling of going crazy, and this was a personal song for Billie Joe Armstrong.

And although the lyrics are about paranoia, the song is catchy and upbeat, but at the same time, it has that urgent message about mental health.

In the Grammy Awards, it was also nominated in the Best Rock Vocal Performance by a Duo or Group category.

Green Day and all their songs are timeless for teenagers who, at some point, share the same experiences about growing up.

They are one of the best 90s rock bands, and listening to their music can make you nostalgic and shift you back to your younger years.