10 Best Radiohead Songs of All Time 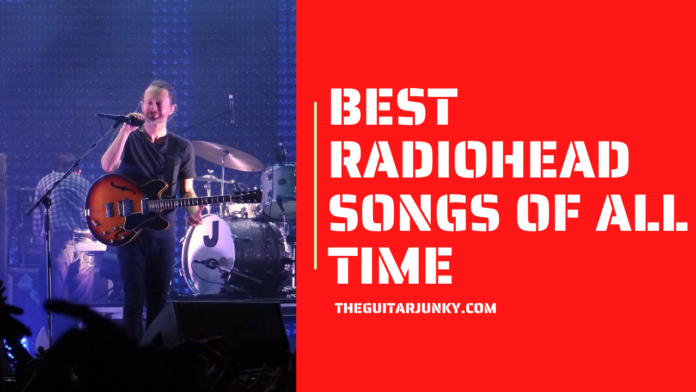 Radiohead is more than their hit song Creep.  Originating from Oxfordshire, England, in the late 80s.

Radiohead is known for encompassing genres, beroing likened in this way to David Bowie by their willingness to experiment and the finesse in their executions.

Being branded as a one-hit-wonder in America after their breakthrough single hit Creep from the Pablo Honey album in 1993, they are proven wrong with OK Computer’s release.

OK Computer has expanded the box of what is considered to be Alternative Rock music.

Using electronics and technology in their album’s genesis, other bands would follow through soon enough.

A tastemaker with 30 million albums sold worldwide and six Grammy awards on their arsenal, Radiohead is proving to be unstoppable.

We list some of the Best Radiohead Songs in this article for your listening pleasure. Check them out and tell us which one you think should be first on the list.

If You Say the Word (Kid Amnesiae, upcoming)

A preview of the upcoming Kid Amnesiae, Radiohead’s LP of unreleased offcuts, and a companion album for Kid A Mnesia’s reissue, If You Say the Word is looking to be promising.

It’s easy to see how excited the fans are seeing as it made the track a top ten in less than a week.

Nude comes from Radiohead’s 2007 In Rainbows album, famous for being released online and that has an asking price of whatever the buyer was willing to pay, and many choosing to have it for free.

Radiohead’s most successful track to date, landing for the first time on the Billboard Hot 100 on 37 since Creep in 1993.

One of the many Radiohead songs with a hint of abstract lyricism, Weird Fishes/Arpeggi, is about being a part of a school of fish and having apprehension about following the school.

Arpeggi is the plural form of Arpeggio, and it is true to its word.

The Guardian included the song in its top 40 Radiohead song of all time.

Exit Music (For A Film) is Radiohead’s contribution to Baz Lurhmann’s Romeo + Juliet.

OK Computer was hailed to be one of the greatest albums, earning a Grammy nomination for Album of the Year and winning the Best Alternative Music Album category at the 1998 Grammy Awards.

OK Computer is considered culturally, historically, and aesthetically significant by the National Recording Registry of the Library of Congress in 2014.

Exit Music (For A Film) is used in such juxtaposition with what’s being shown in the film — the lovers dying, whispering, and the song screeching and sneering, it should be ridiculous, but it fits.

Paranoid Android is a single from their 1997 album OK Computer.

Regularly appearing on compendiums of best songs of all time, this Radiohead masterpiece is in parts inspired by the Beatles’ Happiness is A Warm Gun.

Despite the song being six minutes long, it garnered space in the charts, including the UK singles chart and Australia’s ARIA.

Radio 1 played the track 12 times a day in its heyday, and Yorke remarked that it was one of his proudest moments in OK Computer’s successes.

Rolling Stone included the song in its list of 500 Greatest Songs of All Time, and Pitchfork had it to their Top 200 Tracks of the 90s with Paranoid Android landing at a good number 4.

Fake Plastic Trees is a Radiohead song from their 1995 album The Bends.

This song might be recognizable as an acoustic version of the music used in Clueless, with Alicia Silverstone’s character calling the song “crybaby music.”

Fans would passionately beg to differ.

Thom Yorke, always ahead of the game, achieved the otherwordly sound in No Surprises by singing inside a diving helmet, slowly filling with water.

This track is part of the game-changing album OK Computer, released in 1997.

Its goal is to create something akin to Louis Armstrong A Wonderful World, albeit in a more disturbing and sinister world.

High and Dry is a single from Radiohead’s second album released in 1995 called The Bends.

Intended as a demo track for their earlier album Pablo Honey, it was remastered for The Bends.

A song Thome Yorke wrote when he was still in university.

Together with another The Bends track, Fake Plastic Trees, the song is credited for inspiring the post-British pop music today that is popularized by the likes of Coldplay.

Starting as an inside joke when they toured in 1996 with Alanis Morisette, it developed into another fully-realized track for OK Computer.

Jumping at 8 and 14 on the UK Singles Chart and US Alternative Songs chart, respectively.

The song is about how karma will always catch up with us.

The song that catapulted them to the mainstream, the track they have to outdo continuously. (and they did, OK Computer)

Creep is a part of the earlier album Pablo Honey released in 1993.

As the song grew in popularity, the band grew resentful of it, nicknaming it ‘Crap’ amongst each other.

They felt like it confined the band to a single song and lowered people’s expectations of what to expect from them.

So many people could relate to the song that Thom Yorke remarked about receiving creepy fan mails from ‘murderers’ telling him how much this song means to them.

Prince covered the song for the 2008 Coachella, as well as many other artists.

Their songs will always be sophisticated and abstract but still managing to sounds like it applies to real life.

They may not be everyone’s cup of tea but to be able to love fully, you have to try new things.

Trust, you won’t be disappointed.