10 Best Coldplay Songs of All Time 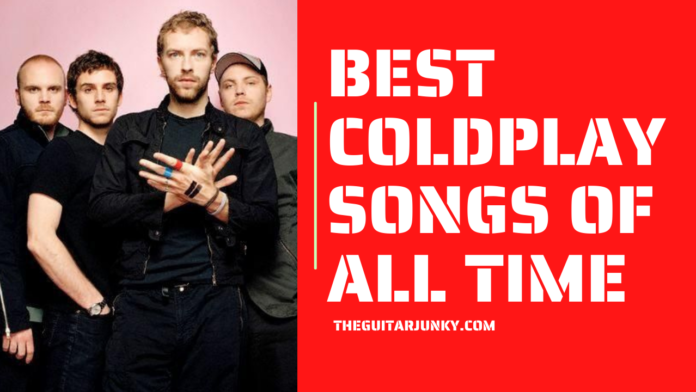 It has been decades since the British rock band was formed, and their albums and hit singles have come a long way since their debut.

Coldplay has defied what it is like to be a rock band with their style of melodic piano anthems.

Their brand has been unique with their lyricism that makes their writing style radiate emotions of joy and sadness at the same time.

Fans loved how the band has expressed social causes with their performances and their songs, and their support for charity projects has earned them so much love and respect from all over the world.

Coldplay has been to a ton of concerts and tours, and to this day, their songs are still very relevant, deeply appreciated, and are still as meaningful as the day they were released.

Here are the best songs from the famous British rock band that have stood the test of time.

Coldplay marked a new era for their band with Higher Power.

The song makes an impact with its meaning of finding the inner astronaut in us, explained Chris Martin.

Higher Power hypes listeners on how it encourages its fans with the inner potential they have in whatever passion they pour their hearts into.

This hit song is their latest one, and it has a mild funky beat with hints of electronic pop throughout the song.

Since its debut, Sparks has held a special place in every Coldplay fan.

The lyrics show the depth of the writer’s intentions to get back together, with some hint that although with starting over, it won’t guarantee that he can’t let her down.

It shows how the writer felt sparks with his loved one, but it just is not enough to make relationships work.

The song is a powerful ballad, and its melody is comforting.

Listening to it intently may somehow change the listener’s emotion from comfort to a slight pinch of sadness with its deep lyrics.

Coldplay’s striking narration of how a girl grew to have the best in life is an understatement of how marvelous Paradise is written.

In an interview, Chris Martin explained how Paradise tells us of how a girl has come a long way from being lost up to finding her fantasy and paradise.

Paradise has its way of being an earworm, especially in that it has unique tones and that its beat varies from mellow to a gradually upbeat one along its course.

The song was released in 2011, but Paradise still has its relevance in today’s society and is quite popular among Millennials and some Gen Zs.

Hymn for the Weekend is relaxing but at the same time a song that hypes up its listeners.

This song is from their album A Head Full of Dreams, and it just embodies so much of the theme for the album of being a lively and cheerful song.

What makes this song stand out from the rest of Coldplay’s discography is how they collaborated with Beyonce who showcased her angelic voice.

Coldplay hits close to their original musicality of deep song meaning as this gives out the passion of achieving things with the right person.

The upbeat and joyous sound of A Sky Full of Stars makes it an encouraging and appreciative song, especially when you incorporate the lyrics with its melody.

One can say how this song speaks a lot about discovering new love and to the point of giving your all and dying for that person.

The beat of A Sky Full of Stars is somehow bordering on fun electro-pop and house music, and its well-constructed and thoughtful lyrics make it an endearing and unforgettable tune.

Fix You is one of Coldplay’s iconic songs, simply for how its words, beat, and arrangement come together for a very beautiful piece.

The song is the perfect hug and pat at the back for someone who lost someone or is simply lost.

It is not confirmed, but the inspiration may come after Chris Martin lost his father-in-law, with whom they seemed to have very close ties.

Even to this day, Fix You remains to be a consoling song that pulls heartstrings for those who loved and lost someone.

Coldplay embraced international attention when their song Yellow topped charts and was appreciated all over the world.

The song has an iconic guitar introduction, and this signature piece became a strong song from the band that allowed them to be heard globally.

Yellow is unique for its deep lyrics of devoting yourself to a loved one, whether it is romantic or platonic love, there is beauty in giving part of yourself to someone you value so much.

Coldplay comes with unique musicality and twists with their signature songs with how Viva La Vida incorporates orchestral sounds.

Viva La Vida directly translates to Long Live Life and it tells us about war, change, life, and death.

There is an ingenious way of putting the song together that makes it very inimitable in their discography.

The Scientist is a song about falling in love with someone and just wanting to start all over again because life and work happened along the way.

The song is open for a lot of interpretations, but Chris Martin clarified how the song is simply about neglecting someone for work.

The flow and the piano work of the song are very iconic, and its melody has a way of reaching out to its fans all the time.

The hit single Something Just Like This is a collaboration between Coldplay and The Chainsmokers, and it stood in charts for months.

The Chainsmokers is known for its electro-pop tunes, and it complements and blends well with Chris Martin’s cool and powerful voice.

Something Just Like This is a song about finding the superhero in everyone, even without the supernatural powers that we traditionally know them of.

Fans initially thought that the collaboration was off because both groups were known for something very different in their musicality, but the song is proof of how music transcends differences and even brought the best of both worlds.

Coldplay has written moving and very thoughtful songs over the years.

The band’s lyricism is genius in its way, especially with how every member contributes and helps with the songwriting process.

Their music style has changed over time, but their adaptability and resiliency in the industry made them a strong group that is still topping charts even after decades since their debut.

Songs that have deep meaning and story behind their narration make a great impact on the audience, and even though that isn’t always the goal of the band, they have touched and changed lives with the music they create.