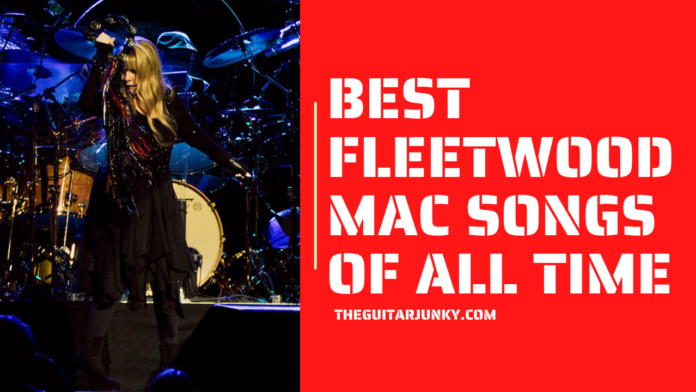 No band has ever radically changed in some years more than Fleetwood Mac did in their tenure as a band.

Starting as a British blues band and like the phoenix rising from the ashes, the band morphed into what we know Fleetwood Mac as today, a California cool pop-rock band.

The band had never disappointed fans, an album by album.

They generated hits but broke out into the stratosphere with the release of their album Rumours.

Here, we list the Best Fleetwood Mac Songs ever sold and recorded, guiding you into the best their band ever put out.

In order to produce the freshest and cleanest tones for the song, roadies had to restring Buckingham’s guitar every three hours, and it isn’t that easy to do.

This technical masterpiece is one of the most charming moments of the album, a song about never wanting to repeat a past mistake.

Several covers are made of the song but always never like the original.

Like many of Fleetwood Mac’s greatest hits, Gypsy is about the tumultuous relationship of Lindsey Buckingham and Stevie Nicks.

Gypsy is from the band’s Mirage album released in 1982.

Stevie Nicks wrote Gypsy about their pre-fame days when they were both essentially living like gypsies.

Gypsy is one of the three songs from the album that reached the Billboard Hot 100, topping at number 12 for three weeks.

Don’t Stop is a toe-tapping track, one of the inspiriting moments in the album, written by Christine McVie.

The song’s central message is the feeling of and about moving on and positive reinforcement for Christine’s ex-husband, her band member John McVie after their divorce.

It reached the Billboard Hot 100 at number 3.

One of Christine McVie’s finest, the song is one of Fleetwood Mac’s most recognizable hits.

Another masterpiece-level writing for Christine McVie, Little Lies, has roots from blues like her other hit, Don’t Stop.

This song is part of Fleetwood Mac’s 1987 album Tango in the Night, their latest chart-topping hit to date.

It reached the chart for both number one and number 4 for US Adult Contemporary and Billboard Hot 100.

Rhiannon is Stevie Nick at her most enchanting and most creative.

She took inspiration from a book she picked up at the airport.

She began to picture this Welsh mythological witch and turned her into a modern California siren — shawl wearing velvets and lace.

It’s part of the band’s self-titled album released in 1975 — a breakthrough album that’s key to their fast, almost overnight popularity.

Rhiannon topped the chart at number 1 in 1976 since Nicks and Buckingham entered the band.

Stevie Nicks wrote Landslide at a crossroad, pondering whether to go back to school or continue with then collaborator and partner Lindsey Buckingham after their first album before Fleetwood Mac, Buckingham Nicks, got dropped and no follow up was asked.

It’s a universal feeling — uncertainty, and the song’s relatability made it boom in the 70s.

Recently, the song peaked in the category Rock Digital Songs on Billboard, and more than 2 million copies of the music have been sold in the United States alone as of 2017.

Another song by Christine McVie written for the Tango in the Night album, the now considered classic, Everywhere by Fleetwood Mac released in 1987.

One of their biggest selling singles to date, garnering a double-platinum award just last February 2020.

Stevie Nicks once remarked that Christine McVie is the hit songwriter in the band.

An array of covers of this song had been made by different artists, most notably Chaka Khan’s cover in her greatest hits collection.

Go Your Own Way is Buckingham’s sour goodbye to Nicks in the form of a song.

Released in their Grammy-winning album Rumours in 1977, the first Fleetwood Mac single that earned the top ten spot in the Billboard Hot 100.

This song also features some of Mick Fleetwood’s best drumming and Lindsey’s own sensational guitar playing.

Amidst the song’s bitter portrayal of her, it didn’t stop Nicks from belting out superb vocal backings, resenting the “packing up and shaking up” line Buckingham wrote because it was never true.

Go Your Own Way was ranked by Rolling Stone as one of the Greatest Songs of All Time, earning the 120th spot; it also was nominated for the category Best Vocal Arrangement at the Grammy Awards in 1978.

The only song in the band that every member has collectively written — patchworks of rejected material and lyrics by Nicks, Buckingham, and McVie, essentially Mick Fleetwood remarked, the song came out from jamming.

The track is sometimes interpreted as a perfect manifestation of the internal tensions and emotional cracks happening in the band.

The Chain sporadically appears in the charts through the years, and just this 2020, the Chain has been awarded two platinum by the British Phonographic Industry simply quantifying download-based sales.

Dreams is Fleetwood Mac’s lone number one single from their acclaimed and Grammy-winning 1997 album Rumours; the song also sold a million copies that same year.

Dreams is Stevie Nicks’ rebuttal to Buckingham’s Go Your Own Way coming from a different perspective; more cleansing and freeing rather than aggressive and assertive.

Dreams is also one of the band’s songs that enters the chart sporadically; it entered the chart when the hit Fox show Glee covered the song on an episode around the band’s Rumours album, and again in 2020 when a Tiktok video by Nathan Apodaca went viral.

Prompting Stevie Nicks, Mick Fleetwood, and Lindsey Buckingham to release an entry to the Tiktok challenge.

Fleetwood Mac is a testament to the professionalism, and sometimes great things come out of adversities.

There’s no denying that Rumours is Fleetwood Mac as its best, especially seeing as 44 years later, they’re still asked about that tumultuous time in their youths.