10 Famous Musicians Who Died Too Young 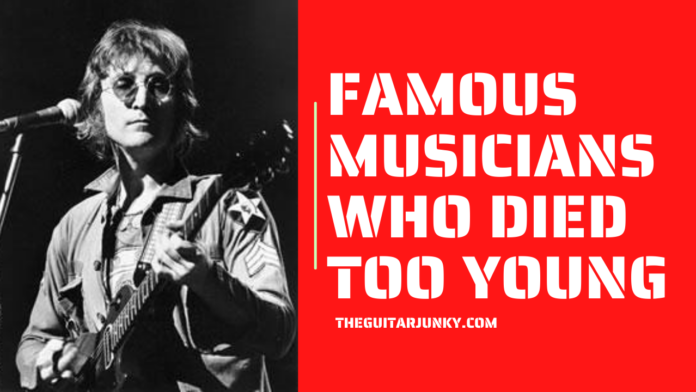 Death is the ultimate end, no matter how healthy or how rich you are.

But how do you reconcile death when it strikes someone young, someone, full of infinite possibilities?

The premature death of famous musicians has shocked the world, so much so that theory was made about a handful of recording artists meeting their untimely death at age 27.

Here, we talk about ten of them, their legacies, the mark they left before everything else.

The Queen of Urban Pop and the Princess of R&B, Aaliyah Haughton, was only 22 years old when she died.

Performing alongside Gladys Knight on the television show Star Search at 10, debuting her first album, Age Ain’t Nothing, but a Number at 12 — Aaliyah was a force to be reckoned with.

She was the foreleader of women rappers in the 90s, working with the likes of Timbaland and Missy Elliot to produce her album.

On August 25, 2001, she died in the Bahamas due to a plane crash with nine other people.

Decades after her death, she’s still one of the greatest, with posthumous Grammy nominations and over 32 million albums sold worldwide.

She was known for her blues-like, all-powerful voice, forefront in the counterculture of the 60s psychedelic rock — Janis Joplin is part of the ’27 club’ together with Jim Morrison, Amy Winehouse, and Kurt Cobain that died at the age of 27.

She joined the rock band Big Brother and the Holding Company in 1967 before launching her solo career in 1969 with her group, the Kozmic Blues Band.

Sadly, she died in an accidental overdose in October 1970, leaving a legacy of mythical level, and will always be evoked for her magnetic performance at the historic Woodstock in 1969.

One of the most influential rappers, Tupac Shakur, was a jack of all trades, dabbling in rapping and singing and acting, starring alongside Janet Jackson in the film Poetic Justice and many others.

He died at age 25 in an unsolved case of a shoot-out in Las Vegas on the night of September 7, 1996, with another rapper, the Notorious B.I.G.

The music journalist Chuck Philips credited Tupac for elevating rap music from the streets to an art form; indeed, we could not have said it any better.

A star singer of the 1960s Motown scene, Tammi Terell is famous for her duets with Marvin Gaye in You’re All I Need to Get By in particular.

Starting her music career at 15 as a member of James Brown’s Revue to signing for Motown at 20, Tammi Tyrell was a force of nature with her brilliance.

She died young at 24 due to a malignant brain tumor exacerbated by his ex fiance’s abuse.

She would have soared alongside her contemporaries like Gladys Knight or Aretha Franklin if she had not died so young.

Her second album, Back to Black, gained worldwide success and made her sweep the Grammy stage, winning five awards, including best new artist, song of the year, and record of the year — all in a single night.

Known as the King of Soul, an integral inspiration to the gospel music that will precede the soul genre, Otis Redding is undoubtedly one of the greatest singers.

Try A Little Tenderness is one of his signature songs that the writers failed to bar him from covering; his rendition was so unique and noteworthy that you synonymously associate it with him when you think of the song.

On December 10, 1967, Otis Redding died due to a plane crash at their tour’s next stop in Wisconsin.

Their valet, the pilot, and all but one member of the Bar-Kays died in the crash.

Honored as the Queen of Tejano Music, Selene Quintanilla Perez released her album at the young age of 12 and since then rose to fame when she won the Female Vocalist of the Year award at the 1987 Tejano Music Awards.

Selena is a trailblazing woman who won the Best Mexican/ American Album at the 1994 Grammy, the first woman from a line-up of Tejano men who won the awards.

Selena was murdered on March 31, 1995, by the former manager of Selena  Etc with a gunshot to her right shoulder, severing an artery and causing her to lose severe amounts of blood, which led to her eventual death.

Avicii’s music is renowned worldwide, whether blaring from the speakers of a bar or a music festival or into your headphones.

Avicii started young at 16 when the mixes he posts online gained a following and broke into the mainstream with his 2013 album True, which peaked in more than fifteen countries.

Avicii retired from touring in 2016 due to failing health caused by excessive alcohol use and deteriorating mental health problems.

In a documentary about him, he exposed the pressures posed to him by his management and his anxieties about disappointing his fans.

On April 20, 2018, he was discovered dead in his hotel room in Oman from an apparent suicide.

Avicii’s death opened conversations on mental health awareness and challenged the stigma that comes with it.

Kurt Cobain is the face of Generation X’s grunge music and one of the most excellent musicians in the alternative rock genre.

He formed the band Nirvana in Seattle in 1987 and breaking out with the worldwide success of their 1991 album Nevermind.

He was also a champion for decrying misogyny, homophobia, and racism.

Kurt Cobain suffered from substance abuse and depression, among other health problems.

He took his own life at his home in Seattle on April 8, 1994, after a brief attempt at seeking recovery and help.

Kurt Cobain was 27 when he lost his life.

John Lennon was many things; he was one of the frontmen of the legendary The Beatles, a revered songwriter and musician, and a dedicated peace activist that used his platform to decry war and its atrocities.

John Lennon and The Beatles ruled the world with ten years of making music that essentially sketched the tumultuous time of the 60s, from their start of being a Buddy Holly-inspired band in their earlier years to embracing the counterculture happening at the end of the decade.

On December 8, 1980, he was shot and killed by a fan in front of The Dakota apartments in New York City.

John Lennon was just 40 at that time.

There you have the top 10 musicians who were famous but died at a very young age.  They contributed so much in the industry and still now are idolized all over the world for their great music.

Which among them is your favorite?