10 Best Pixies Songs of All Time 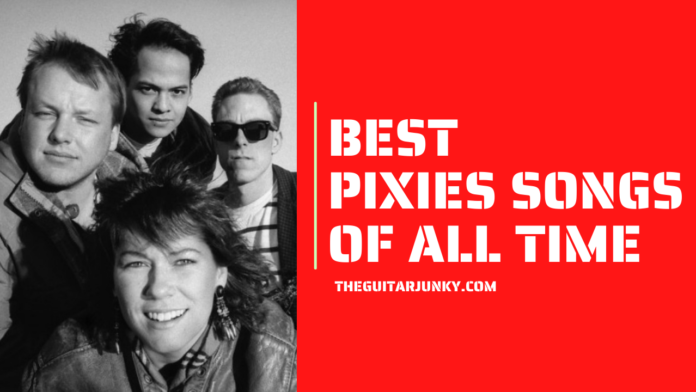 Famous for their unique song structures with a characteristically vibrant loud-quiet-loud configuration, the best Pixies songs are a quintessential favorite of any die-hard alternative rock fan.

The Boston-based band drew large crowds willing to listen to their surreal lyrics about offbeat subjects, including biblical violence, incest, and extraterrestrials.

Although the band is American-made, Pixies found more substantial success in the international arena, particularly in front of the European crowd who adored the band’s jarring pop sound.

Nirvana, Smashing Pumpkin, Radiohead, Weezer, and a few other rock and alt-rock bands drew inspiration from the Pixies’ acts, proving the band’s influence in shaping the alternative rock scene.

In this article, we will rediscover the best Pixies songs streaming from Spotify. Get ready to fill your Airpods and Beats with the pulsating music of one of the music world’s best acts.

When bassist Kim Deal left the group, Paz Lenchantin took over the reins.

The first thing Lenchantin could ever think about was to thank Deal for opening an opportunity for her to join the thriving band.

Since its release, All I Think About Now has generated close to nine million Spotify streams.

Not bad for a beginner.

Fifteen years after the band first released the heart-stopping Wave Of Mutilation, Pixies decided to slow it down a bit with this mellowed version of the 1989 hit.

With its cryptic lyrics mixed into a framework of pop, surf rock, and punk rock, the new WOM continues to drive the imagination of millions of audiophiles.

Gigantic may have failed to reap recognition from the charts, but it will go down in history as one of Pixies’ best songs.

The song is a favorite encore piece, complete with Deal’s phenomenal vocals complementing his now-iconic bassline.

Several artists covered the song in the 1990s and well into the 21st century, including Tlot Tlot, Reel Big Fish, Swell Season, and Surfer Blood.

Pixies fans know the band’s strong inclination towards referencing the Bible in many of their works.

Gouge Away is one of those Pixies songs that draws inspiration from biblical stories, namely Samson and Delilah.

However, instead of betraying Samson for silver, Pixies’ Delilah uses marijuana to determine the truth – gouging it out of the man.

Critics consider it one of the alt-rock band’s finest, even though the song did not land any significant recognition.

Kim Deal’s vocals were as sugary as ever, but Gouge Away was the rare piece where his voice magically complemented Black Francis’s wild howls.

From the same album that gave audiophiles Monkey Gone to Heaven, Here Comes Your Man, Hey, and Debaser comes another Pixies hit – Wave of Mutilation.

It has an upbeat tempo and chest-pounding guitar riffs that will have you dancing to the beat in no time.

Interestingly, Black Francis wrote the song after reading news about  Japanese men rediscovering the old ways of Bushido but with a different twist.

The song has an eerie feel that will have the hairs on your back standing like the sentries of West Point.

Whoever said alternative rock bands are punks who could not care any less about the world is unfamiliar with Pixies’ Monkey Gone to Heaven.

Unlike the other tracks in the Doolittle album, this song puts the spotlight on humankind’s environmentally destructive activities.

It questioned humanity’s place in the vast and ever-expanding universe, begging listeners to reflect on their relationship with the divine and their surroundings.

The song has a powerful message that resonates with more than 48 million audiophiles streaming on Spotify today.

Monkey Gone to Heaven is one of the Pixies’ most recognized hits, landing the third top spot in Billboard’s Alternative Airplay and Rolling Stone’s number 410 in its 500 greatest all-time songs.

The song also won Single of the Year in the US and the UK while bringing home the number 35 spot in the UK’s 50 all-time greatest indie anthems.

Like the silent film, Debaser does not have the classic elements of a rock and roll legend.

However, it does provide listeners with an eerie feeling about how such a simple film can shatter preconceived notions about visual storytelling.

The same is true with Debaser – defying conventional ideas of how music must be structured and organized.

It is a treat for the senses that 61 million or so Spotify users now enjoy.

Hey demands attention with its religious undertones that will have the devout cringe in their seats.

There are lazy but ear-splitting guitar riffs that break the song’s melodic monotony – proof of Pixies’ command of the underground rock scene.

Ridiculously brilliant and insanely catchy, Hey manages to capture the imagination with its infatuating tune and unmatched profanities.

It can still cast a powerful spell on whoever hears it, with close to 100 million Spotify users filling their ears with the song’s robust vibe.

This song almost did not make it out of the studio because band members thought it was a substantial departure from what they have been doing.

Only with Gil Norton’s prodding did Here Comes Your Man start its meteoric rise.

The piece, considered by some as too straight and too pop, peaked at Billboard’s number three position in Modern Rock Tracks.

Canadians certified the song as Gold, while Hollywood moguls incorporated it in their projects, including 500 Days of Summer, Deuce Bigalow, and Daddy’s Home.

Undoubtedly one of the Pixies’ most popular songs, Where is My Mind? continues to inspire budding artists and entertain contemporary audiophiles.

With close to 397 million hits on Spotify, this 1988 alternative rock is one of the best Pixies songs you can ever have in your playlist.

Even though the song did not earn accolades from prestigious organizations, it remains influential in many artists’ lives.

Many bands have since covered Where is My Mind? with media outlets and other organizations using the song in their endeavors.

The song is certified double-Platinum in Canada, Platinum in Italy, and Gold in the UK.

The best Pixies songs let you discover a part of yourself you failed to notice before.

Perhaps that is one reason many contemporary audiophiles take to streaming platforms to listen to the Massachusetts-based band’s music.

Regardless of the reason, these songs are worth adding to your playlist and give you an 80s’ experience in the 21st century.