10 Best Grunge Bands of All Time 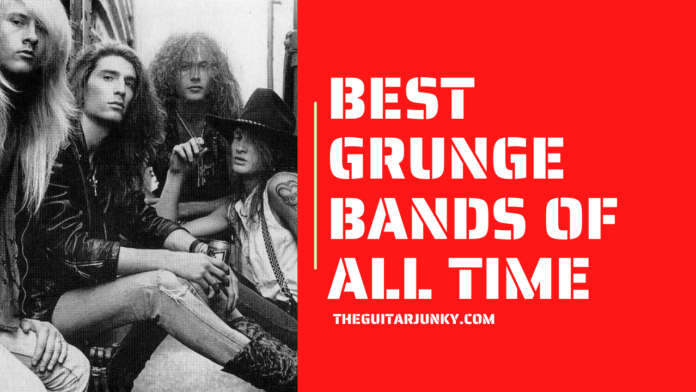 The best grunge bands are never afraid to push the boundaries of musical creativity, even if it means filling their songs with distortions, ponderous and heavy basslines, ear-splitting guitar feedback, and down-tuned guitar riffs.

With elements of heavy metal and punk rock, grunge rock is not for every audiophile.

However, for those that do, listening to the best grunge rock bands on the planet is an out-of-this-world experience altogether.

While pundits saw the rise of grunge as the demise of melodic and structured rock, grunge rock is here to stay.

Spotify recognizes the role grunge music has in the industry and dedicates a playlist titled The Grunge Era.

In this article, we will look at ten of the best grunge bands making headlines on Spotify.

We might still make a grunge rock believer in you.

Although the group disbanded in 2012, Hole’s masterpieces still enjoy substantial airplay on Spotify.

Unlike most grunge bands, Hole’s lead is a woman – Courtney Love – proving detractors that grunge music is as much a woman’s arena as it is a man’s.

Hole is one of the new millennia’s highest-profile bands, loved by feminist and music scholars alike.

The band sold more than three million records alone and earned four nominations to the Grammys.

Formed in 1990, Blind Melon continues wowing the crowd with their grunge music fused with neo-psychedelic elements.

No Rain is one of the band’s most critically acclaimed and commercially successful works, allowing the group to enjoy a popularity very few in their niche achieved.

The band’s three studio albums and two compilation albums may be insufficient to match the discography of other grunge acts, but they have four Grammy nominations under their belt.

8. Temple of the Dog

Following in the footsteps of Seattle’s great grunge bands is Temple of the Dog.

It is not surprising since most band members came from or joined either Pearl Jam or Soundgarden, two of the grunge movement pioneers.

Although lasting only three years with one album and three singles, Temple of the Dog managed to land its self-titled album on the 5th spot of the US charts and gained Platinum certification from both the US and Canada.

This band may have started as a grunge act, but it has evolved into a well-meaning musical group, fusing classic rock, bossa nova, and psychedelic rock into their songs.

Stone Temple Pilots were one of the most successful bands in the 1990s, selling at least 58 million records worldwide, including the US.

The band has four Grammy nominations, winning one of them for their work Plush.

The group also has awards and nominations from the American Music Academy and MTV.

This Chicago-established grunge act is famous for its guitar-heavy, densely layered, and highly diverse sound.

The Smashing Pumpkin has two Grammy Awards, two MTV Video Music Awards, and an award each from American Music and MTV Europe.

With more than 150 songs across ten studio albums, six video albums, five live albums, and three compilation albums, the Foo Fighters are a force to be reckoned with in the thriving grunge era.

The band’s phenomenal rise to stardom is not surprising because Nirvana’s Dave Grohl formed it after Cobain’s death in 1994.

This year, 2021, the band saw themselves inducted into the elite circle of Rock and Roll Hall of Famers.

The group also received MTV VMA’s Global Icon Award in 2021, the first of its kind.

If Pearl Jam opted for a softened grunge version, Soundgarden went all out with their fuzzy-sounding guitar distortions to create murky and sludgy yet interestingly captivating music.

The grunge act is an acolyte of drop D guitar tuning and other alternative arrangements, providing neo-Sabbath punk classics, such as Spoonman, Black Rain, and Jesus Christ Pose.

In 2020, Soundgarden earned a nomination to the Rock and Roll Hall of Fame, capping decades of multiple awards from major organizations, including Grammy, Citio, MTV, MTV Europe, Revolver Music, and Northwest Area Music.

While formed in 1990, the act still wows the crowd with their fine-tuned music that resembles the 70’s classic rock.

Perhaps, this is one reason many contemporary audiophiles love Pearl Jam more than other grunge bands.

As of 2018, the band has at least 85 million records sold under its name, with more than 37% of sales from the US market.

This Rock and Roll Hall of Famer was also Rolling Stone’s eighth greatest live act in history, endearing them forever to their adoring fans.

Nirvana continues to preach their grunge-alt-rock-hard-rock music to adoring fans more than 27 years after the band’s last act.

They may have a punk aesthetic, but Nirvana’s musicality is beyond comparison.

This grunge band sold at least 75 million records globally and received a Grammy, a Brit, and American Music accolades.

Add to these accomplishments two NME Awards and seven Video Music Awards from MTV, and you have a tough act to follow.

In 2014, Nirvana was inducted into the Rock and Roll Hall of Fame, only two decades after the band disbanded.

Alice in Chains is one of the pioneers of the grunge movement in the late 1980s and continues to mesmerize the crowd with their heavy metal, hard rock-inspired music.

Alice in Chains draws inspiration from many of the world’s finest artists, including Black Sabbath, AC/DC, Aerosmith, Deep Purple, The Beatles, and more.

This Seattle-born grunge act sold more than 30 million records globally and another 14 million in the US.

It had 23 singles entering the Top 40 of different charts and was nominated eleven times for the Grammys.

While not everyone appreciates the best grunge bands, they remain well-loved by their millions of followers who want music far different from other genres.

With heavy metal, hard rock, and punk rock elements in every song, these bands continue to generate interest from a growing number of upstart artists and newbie audiophiles.

And they have multiple recognitions and awards to prove it.