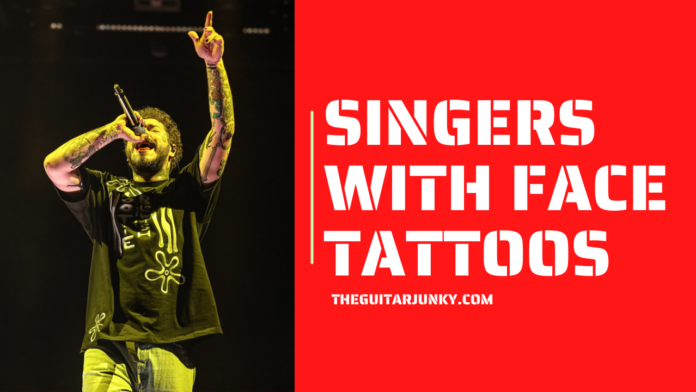 Face tattoos are common to singers and artists, and they use them as self-expression or a way of documenting their success and other important life events.

Most of the time, tattoos also boost the appeal of various musicians and help them gain more fans that they become really influential to people especially among the youth.

Here is the list of top 10 singers with face tattoos.

One of the most popular singers with face tattoos is Post Malone.

His name in real life is Austin Richard Post, who is known as an American singer, songwriter, and rapper.

Post Malone got many tattoos on his whole body, but some of the most visible are the ones on his face.

Among the face tattoo that he has on his cheeks are the words “Always Tired”.

Meanwhile, everyone can also see words that spell “stay away” located on his upper eyebrow.

Post Malone explained from his previous interviews that his tattoos are inspired by lyrics of songs.

These do not affect the performance of the singer, but instead, add to his appeal even more.

Post Malone was known for his song “Congratulations” which tops the US Billboard 100 in 2016.

As of now, he is one of the best-selling musicians in the whole world.

Who else doesn’t know singer Justin Bieber who started his career at a very young age?

The fans witnessed the colorful musical journey of Bieber as well as the glow-up in his style and other details, such as body tattoos.

It is no secret that this singer has a small tattoo right under his eye.

According to news, he got this little cross tattoo on his face in 2016 as a sign of his strong faith.

Aside from the face tattoo, Bieber also got other tattoos just like the one printed on his belly.

This young singer achieved a lot of recognition at a very young age.

Among his famous songs are “Baby,” “Sorry,” and “Love Yourself”.

Up to now, Justin is continuously creating beautiful songs, while also having a good personal life with their wife Hailey Baldwin.

Another music icon with face tattoos is Soulja Boy or DeAndre Cortez Way in real life.

The most remarkable tattoo on his face is the Gucci logo that is right on his forehead.

The rapper admitted that his mother disapproved of the said tattoo on his face at first.

He made some of his tattoos removed later anyway.

Soulja Boy is a rap genius and his forte is basically a hip hop, snap trap, and pop-rap.

Fame really loved Soulja Boy as his song once stayed on top of the Billboard Hot 100.

Some of the most popular songs of Soulja Boy are “Top Back” and “Tear it up”.

He treated his album entitled “The DeAndre Way” as his most successful single.

This rapper also won a lot of awards. One of the most prestigious awards is the Best Hip Hop Dance in 2007.

He was also nominated in the Grammy Awards in 2008 for the Best Rap Song category.

Chris Brown is considered to be a multitalented legend in the music industry.

He can do singing, songwriting, dancing, and acting, but aside from these, he is also known as a graffiti artist and a record producer.

Interestingly, this R&B artist got a cool tattoo on his face.

It was an image of a branded sneaker that is located on the right corner of his face.

Brown holds the record of being the first male artist who tops the Billboard 100 since 1995.

This musician became really influential to previous and budding artists across the world.

His song “With you” top the Billboard 100 in US and New Zealand.

In his entire career, he won a total of 123 titles which includes 1 Grammy Award.

Aside from these, he had 406 nominations in different categories.

Wiz Khalifa is one great singer and a sweet father.

As proof, he got 18 tattoos all over his body and the one on his forehead was a print of his son’s name Bash.

His real name was Cameron Jibril Thomaz and started his career in 2005.

This singer picked the screen name Wiz Khalifa from the Arabic word which means successor.

He is known as an excellent singer of party songs, hip hop, and pop-rap.

Some of the most successful album of Wiz Khalifa are “Show and Prove” and “Deal or No Deal”.

In 2016, this singer won the BET awards as the Top Rap Song with his song “See You Again”.

Aaron Carter is a superstar during the peak of his career in 1997.

Gifted with a pretty face and prowess in guitar and good vocals, he became successful in America.

A small tattoo on Carter’s face suits his face well, and it contributes more to his mass appeal.

The wonderful career of this musician started at a very young age.

He was seven years old when he successfully hit the chart with his self-titled album in 1997.

Another remarkable phenomenon in his career was when he joined the Broadway show “Dancing with the Stars”.

Carter has a lot of fans in the whole world that supported his tours.

Some of his unforgettable songs were “I’m All About You” and “Sooner or Later”.

This singer whose name is Kehlani Ashley Parrish from California is sizzling hot in every performance.

What adds up more to his stage presence and appeal is the simple tattoo on her face.

A paper plane tattoo right on her cheek symbolizes freedom and style.

She got 16 other tattoos that also include the image of Lauryn Hill and Coraline.

Originally Kehlani was a member of a group in her hometown called Poplyfe that happened to be one of the contestants in America’s Got Talent.

However, she decided to go solo when some issues arose with her group management.

She invaded the Billboard Charts in 2014 through her mixtape “Cloud 19.”

Kehlani also received a total of nine nominations from the Bet Awards and American Music Award.

This controversial rapper revealed his face tattoo that is an anchor on the left corner of his face.

All in all Jacques Webster, his real name, got a total of 39 in his body.

But one of the most special tattoos that he has is a butterfly print that matches his partner, Kylie Jenner.

Scott is known for his great contributions in the music industry as a rapper, songwriter, and record producer as well.

His genre is more on the alternative hip hop just like his popular songs “Sicko Mode” and “Upper Echelon”.

Scott snatched the top 16 spots in the Billboard 100 with his song “Antidote”.

He also won the People’s Champ Award for this single in 2016.

This American songwriter and rapper got his first tattoo on his face when he was just 18 years old.

As a resolution to his fear of upsetting his mother with a tattoo, he literally asked the tattoo artist to draw the name of his mother on his face.

Lil Xan’s got a passion for tattoos, and overall he has 41 body tattoos.

His real name is Nicholas Diego Leanos that started his career in 2015.

The peak of his music career was way back in 2018 when his song “Betrayed” reached a platinum level.

It also achieved the number 64th spot on Billboard 100.

His favorite genres are hip hop and mumble rap.

Lil Xan also got a few nominations from the MTV awards in 2018.

Last on our list is Rick Ross whose complete name is William Leonard Robert II.

He was a famous rapper who loves hip hop, gangsta rap, and southern hip hop.

Tattoos, like face tattoos, are never new to Rick Ross, as he has 65 of them on his entire body.

These links are one of his unique way of documenting every memorable event and success in his life.

Among the most noticeable tattoo is the one printed on his face.

Its design is “three crosses” positioned just below his right eye, and this symbolizes his faith and religion.

Ross’s career rose in 2012 when he launched his album ‘Rich Forever.’

His colorful journey continuously flourished until 2016 when he released “Rather You Than Me” album.

There you have our featured tattooed artists that you should know.

Being tattooed, definitely, is becoming interesting, so undoubtedly more celebrities are being inked.

But aside from the aesthetic appeal and Instagram-worthy face tattoos, they also mean different things for these singers and artists.

Some of these artists believe that face ink is an effective way to show their passion and perspective in life, whether they’re placed on the rear, left side or right eye, right eyebrow, right side of the face, forehead, or cheek.

Regardless, these tattoos on inked singers become trademarks that fans remember about them.