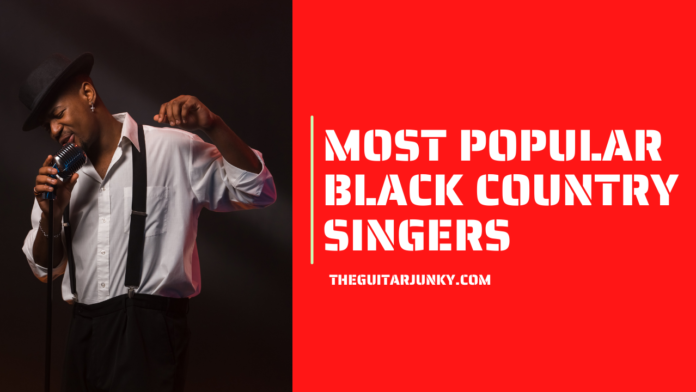 When we talk about country music, most of us think of white singers; however, little many of us know that black country singers are some of the most tenacious, talented, and passionate singers in the country music genre.

In this article, we’re featuring the most popular black country singers that you should know if you like country music and music in general.

Who’s your favorite? Let us know after reading this post.

In the meantime, let’s begin and highlight a list of the best black singers the world’s stage has ever known.

He’s a legend in the music industry and is known as one of the most versatile and excellent-sounding country singers of all time.

This country artist achieved so much success in the genre, and in fact, he’s won 3 different Grammy awards, as well as an induction into the ‘Country Music Hall of Fame and Museum (2000).

He’s also gained an outstanding achievement in the 70s when he was named RCA Records bestselling performer since the legend Elvis Presley.

Being a part of the Billboard Country Airplay Chart (2015), “Better Than You Left Me,” her debut single is one of the most successful country songs, and in fact, it has paved the way for her nomination in the prestigious ‘New Female Vocalist of the Year’ (ACM).

Despite a lot of people who were questioning her identity and choice music, Guyton continued to excel in her genre and became one of the most influential singers of her time.

Nevertheless, she’s one of the most successful female black singers of her time.

Another black country singer, Darius Rucker once became famous as a male black artist in Hootie & Blowfish in 1989, and this has helped him achieve a superstardom status that other artists could only dream of.

His band entered the mainstream with ‘Cracked Rear View’ in 1994.

It sold more than 16 million units, and it earned the band two Grammys.

Later, Rucker, as a solo country music singer, had a successful solo career.

Their family was musical and at a young age was involved with church and high school choirs.

Known for his songs, such as “You Do My Heart Good,” “Love Light,” How Can I Hold You,” and “Walking,” this singer has carved his name in the music industry.

In fact, all these songs were once chart-toppers on the ‘Billboard Hot Country Song’ chart.

He’s an American country music singer and songwriter that has been active since 1990.

He has a total of five albums, 3 of them being for Liberty Records.

On Billboard Hot Country Songs, Francis charted four times, with ‘You Do My Heart Good’ (1992) being the most successful.

Did you know that this country singer has left his career in cardiology to sing and chase his dream in the late 1980s?

Also called just Ray Charles, he was a songwriter, singer, composer, and musician that has also left a legacy for country music fans.

Sometimes called by friends ‘Brother Ray’ and ‘The Genius’ by a lot of fans, Charles was the one who pioneered soul music in the 1950s, combining R&B, blues, and gospel styles.

Did you know that this genius lost his vision when he was 5 and became blind when he was 7 years old?

Did you know that this man is one of the very few artists that has received 65 different nominations – and bagged 15 of those?

However, it is yet to be seen if he’s continuing to be known between two genres – country and rap.

“Old Town Road,” his country rap song is a highly acclaimed piece that made a huge noise on Tik Tok, and by 2019, it became a Diamond-certified song.

“Make Me Want To” and “Best Shot” are his two most popular singles.

“Make Me Want To” is his second single, and it’s second from his debut album “Mercury Lane” back in 2018.

He wrote it with Jennifer Denmark and Paul Sikes, and it’s co-produced by Ash Bowers with Eric Torres.

This song recorded a 58-week climb to the #1 spot, and it’s even considered one of chart history’s longest climbs.

Meanwhile, his song “Best Shot” received “Breakthrough Video of the Year” (2019) by CMT.

In 2018, he became the 1st black male singer artist that launched his singing career with a #1 song on country radio.

Not a lot of knowledge of, but Tina Turner was a country singer before she’s ordained ‘Queen of Rock n’ Roll.’

“Tina Turns the Country On,” her debut album, was full of country music covers, earning a nomination in the Grammy Awards (1975).

Born Anna Mae Bullock, Tina was a household name in the 60s and 70s; she’s known performing with her ex-husband Ike Turner.

She’s one of those artists with an extraordinary music career, her songs topping the charts and she touring the world for her music.

Born in Louisiana, Trini Triggs is another country music singer, whose debut album was created in 1998 by Chuck Howard and Antony Smith.

His self-titled record had gained him a huge following online.

This group mystifies the audience with their unique style, combined with mandolins and black string instruments.

They are a string ensemble composed of Leyla McCalla, Rhiannon Giddens, and Dom Flemons and formed in 2005.

Combining his musical talent as a hip hop and country rap artist,

there is nothing quite like this black country musician, whose name suits his genre.

At a young age, he started singing, but his first solo album ‘Raybaw,’ had only been launched into the spotlight in 2005.

In Montreal, her native land, she found herself on the stage singing songs of Stan Rogers with other local players.

The singer toured in Po’ Girl and then launched Birds of Chicago, a duo, with JT Nero, her partner, before she’s able to share stories of African-American issues, such as hope, resistance, and struggle, in the Native Daughters.

But now, she steps out for ‘Outside Child,’ her full-length debut, which is an autobiographical album where she’s singing her traumatic youth with courage, hope, and triumph.

In three days, Russell tracked this album at the Sound Emporium Studio (Nashville), and she’s able to enlist different collaborations, including from The McCrary Sisters and Yola.

These singers have been critically-acclaimed not only in country music but also in jazz, pop, electronic music, soul, folk, and soul.

The Pointer Sisters had scored success in different genres, especially in the 1970s to 1980s.

They’re composed of Bonnie, Ruth, Anita, and June, but was originally composed of sisters June and Bonnie.

A few things about them:  These sisters had successful appearances, including at the nightclubs in

They’ve become an example and model of post-Motown girl group.

With the release of ‘Break Out,’ they reached their high point in 1983.

They also had a string of hits, and in fact, the group garnered a Grammys recognition for ‘Automatic’ and ‘Jump (for my Love).’

The group received New Music Weekly’s ‘Best New Country Artist’ during the early parts of her career, and this isn’t common for a black artist.

‘Freeway Bound,’ her debut album, also received “Album of the Year” award (IMA), as well as gaining success in her second released album.

Named as the ‘First Lady of Country Soul,’ she’s one of the few black female country performers and singers that was able to perform with the likes of Tracy Lawrence.

And among other achievements, she’s earned a spot in the ‘Country Music Hall of Fame.’

The American country singer and songwriter has released 7 studio albums, with some of her songs appearing in the ‘Top 100 Country Singles’ charts.

She’s awarded the ‘Songwriter of the Year’ (Tennessee Songwriters Association) in 1994 and had toured throughout the USA.

In addition, Essence magazine also included her in “18 Black Country Singers You Need to Know” (2016).

Nevertheless, she’s one of the most accomplished black country singers that has made a mark in history.

There you have our pick of the most popular black country singers that are remarkable and have changed the country music scene with so much of their talent and passion in their craft.

They deserve all the applause and recognition as anyone does.

And lastly, they have made the music industry more colorful and interesting with their music style and hit songs.

Which among them is your favorite? Do you think we missed our black country singer in the list? Tell us in the comments. Finally, spread the word and share this post on social media today!