Is it Better to Learn Guitar on an Acoustic or Electric? 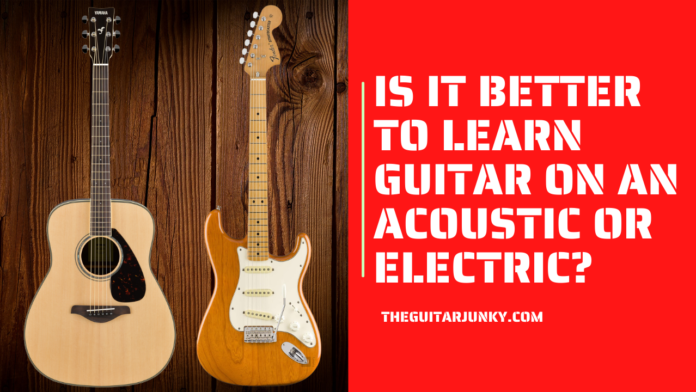 Quick Answer: Either is better. Your interest and your music preference will determine which is a better guitar for you. However, if you don’t know where to start, get an acoustic guitar. It’s the cheapest and the most common way to get started.

Why Start Learning With Acoustic Guitar?

Newbies and aspiring guitarists usually get an acoustic guitar to get started because it’s cheaper and lightweight. Some other players start with an acoustic because that should be the first guitar. Well, no book says an acoustic guitar “should” be your beginner guitar, but it has some advantages.

With an acoustic guitar, you only need to learn the chords and strumming (especially for complete beginners). Once you learn the basic chords — A, C, E, D, Major, and Minor chords, you can play a lot of songs by just knowing these few chords, no barre chords yet.

The problem with acoustic guitars is that they have steel strings and they have a much higher action compared to an electric guitar. It’s physically challenging at first, and you really need to experience pain at your fingertips. But, it’s only for the first few months, maybe 1-3 months of continued practice.

Now – How About Learning on Electric Guitar?

Many players say that beginners should start with an electric guitar because it’s easier and more comfortable. Electric guitars do have the most comfortable neck and they have a much lower string action since they don’t need a bigger space for resonance. So, a slight push of the strings will allow you to achieve a lot of things.

Electric guitars have pickups with volume and tone controls. You can add more effects and distortion. However, added controls will be more overwhelming for new players, especially those who are still beginning to learn the chords.

Lastly, you must need an amp to get that bright and twangy tone from your electric guitar. Additional expense. And if you don’t get the right setup and tuning from the start, you’ll hear your mistakes pretty loud. This will frustrate newbies even more and will hesitate to play harder.

How to Know which Guitar is Much Better?

Quick Answer: Start asking yourself what music you want to play. It’s that simple. If you want to play country, blues, and pop, you should get an acoustic guitar. However, if you like to hear all the riffs and the flatter sound in rock, funk, and metal, you should probably have an electric guitar.

Is it Possible to Learn These Two?

Quick Answer: Definitely. If you can play these two, you’re already a versatile guitarist. They are basically the same, but the mechanism of producing the sound is different. An electric guitar has an amplified tone, while the acoustic has the natural tone.

If you’ve played an acoustic first, learned the chords and the basic music theory, you can use them all on an electric guitar. You can play every song that you learned with acoustic on your electric guitar, but it’s not always true the other way around.

Both acoustic and electric guitars are learnable and one isn’t better than the other. All the basic chords and theory applies to both. They aren’t comparable because they are different in terms of design, sound mechanism, and the sound they produce.

If you love country music or blues, get an acoustic. On the flip side, use an electric guitar only if you want to be the next rock star. The good thing is, you can play both guitars. So, don’t limit yourself to play a better guitar when you can be versatile by learning to play both.