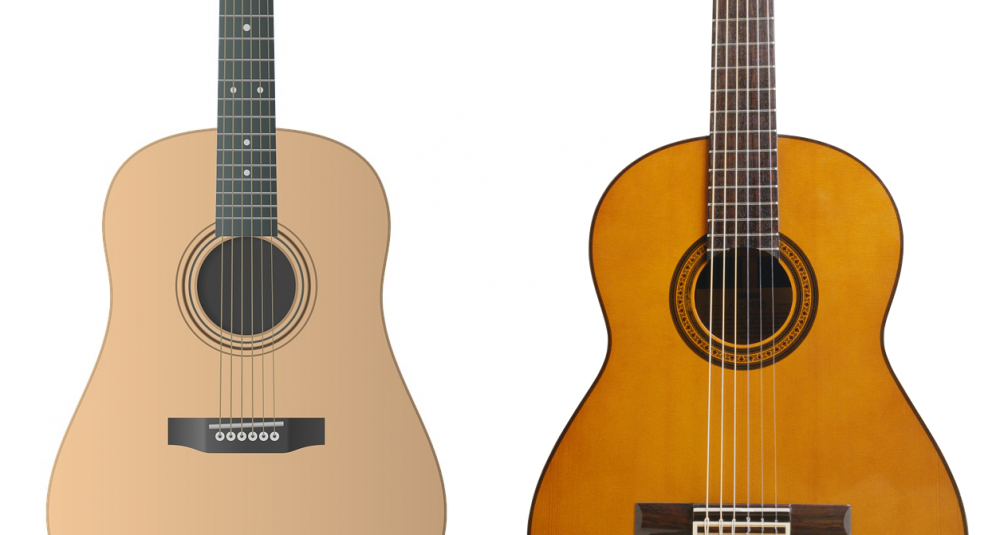 The type of music you want to play dictates the type of guitar you should have. So, whichever is better between the two, depends on your musical interest. Classical guitars have a mellow tone good for folk and classical music, while steel-string guitars have crisp tone for country and rock.

Since you are deciding between these two, you like the natural, calm and soothing sound of acoustic guitars. Classical is also known as nylon-string because it has nylon strings. Common classical guitars have nylon strings from the thinnest or high E up to G, while steel string or nylon winding from D up to the thickest or low E.

Nylon strings are softer and less dense material, so they are under less tension. This means that it’s slightly easier to push down the strings to fret notes. However, they tend to get out of tune easily, hence classical guitars need to be tuned often.

Steel-string, on the other hand, are the ones commonly known as the acoustic guitar. They have steel strings, as the name suggests, and they can also accommodate other metal strings like bronze and nickel.

The steel strings need to have a higher amount of tension, which means that you need more effort to push the strings down than nylon. However, with a proper setup and lower action, steel-string guitars shouldn’t really that challenging.

Aside from the choice of music and the strings used, there are still a lot of similarities and differences between these two acoustic guitars. They both have all the essential parts — body, neck, fretboard, soundboard, and hardware. They also play well unplugged and don’t need an amp to get the best sound they have.

Classical guitars are usually smaller than steel-string guitars. The former usually has one body shape, while the latter has different shapes like dreadnought, jumbo and have some cutaways, too. With the shape of classical guitars, most kids and young players pick one of their kind over the other acoustic guitar.

You can easily feel the difference between the neck of a classical and a steel-string guitar. Classical guitars have a wider neck and the strings seem farther from each other. The opposite is true for steel-string, although you can also get a few with wider necks.

The reason behind this is that, the nylon strings are thicker than steel strings, hence, they need more room to vibrate. Since the strings are farther, classical guitars are very easy to fingerstyle.

Even if you don’t see the guitar being played, you can easily distinguish the sound between classical and steel-string guitars. Classical has a mellow and warm tone, very suitable for classical music, flamenco, and folk. The steel-string has a bright and crisp tone, which is fitting for bluegrass, country or rock.

Can You Restring Classical Guitars with Steel Strings and Vice-Versa?

You can’t put nylon strings on a steel-string guitar because it’s impossible for you to put enough tension to the nylons to make them sound like steel strings. On the other hand, it’s very risky to put steel strings on classical guitars because the neck isn’t designed to take on much tension. Therefore, it may damage your precious instrument.

Classical and steel-string guitars are unique in a lot of different ways. Though they are both acoustic guitars, they are designed for a different purpose and play different music.

If you think a classical guitar is better because you love classical music, it doesn’t always mean, other players will love it too. So, whichever of the two is better depends on the players’ preferences and musical interests.