Gibson SG Special vs Standard – Differences, and Which is Better? 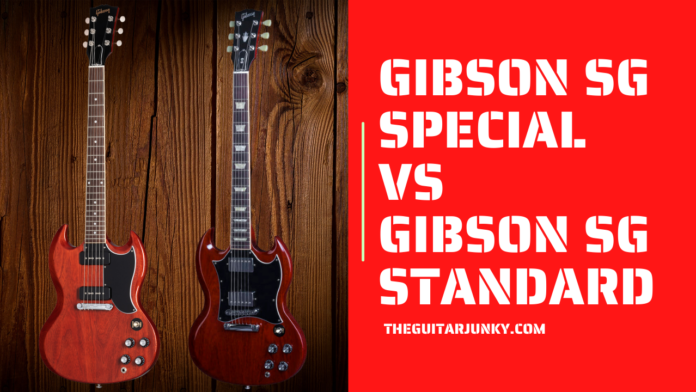 Rock n’ roll legends consider the Gibson SG Standard a tone monster and one of the best electric guitars ever to grace the music-loving world. Gibson designed the SG Standard as a more affordable alternative to the legendary Gibson Les Paul.

Unfortunately, the Standard’s price tag remains beyond the reach of ordinary guitarists.

That is why Gibson introduced the SG Special as a more affordable alternative to the SG Standard. The question guitarists dreaming of owning an SG have now is whether to get a Standard or a Special. Gibson SG Special
4.7
CHECK PRICE ON SWEETWATER CHECK PRICE ON AMAZON
We may earn commission from purchases made from our links, at no additional cost to you.

The Gibson SG Special is an affordable Les Paul-wannabe that produces a smooth, sweet, warm, and full sound, perfect for the novice and advanced beginner electric guitarist. It features a mahogany body and neck, rosewood fingerboard, and reliable selectors and controls for effortless and fast-action playing.

For Fans of Les Paul Gibson SG Standard Tribute - Vintage Cherry Satin
4.5
CHECK PRICE ON SWEETWATER
We may earn commission from purchases made from our links, at no additional cost to you.

A solid favorite of Les Paul fanatics, the Gibson SG Standard offers classic elegance and legendary musical production capabilities without the LP’s dizzying price tag. The guitar has one of the finest cosmetic finishes, a pair of dynamic-tone humbuckers, and sturdy and reliable controls for more enjoyable playing.

One of the principal differences between the Gibson SG Special and SG Standard is the pickup. Both guitars feature a pair of pickups, one on the neck and another on the bridge. However, they differ in the pickup type.

Using humbucker pickups instead of the usual single-coil gives the Gibson SG Standard better tonal dynamics than the SG Special. Rock ‘n roll diehards and blues aficionados will adore the sound emanating from this guitar, playing pure rock near the bridge and classic blues on the neck. 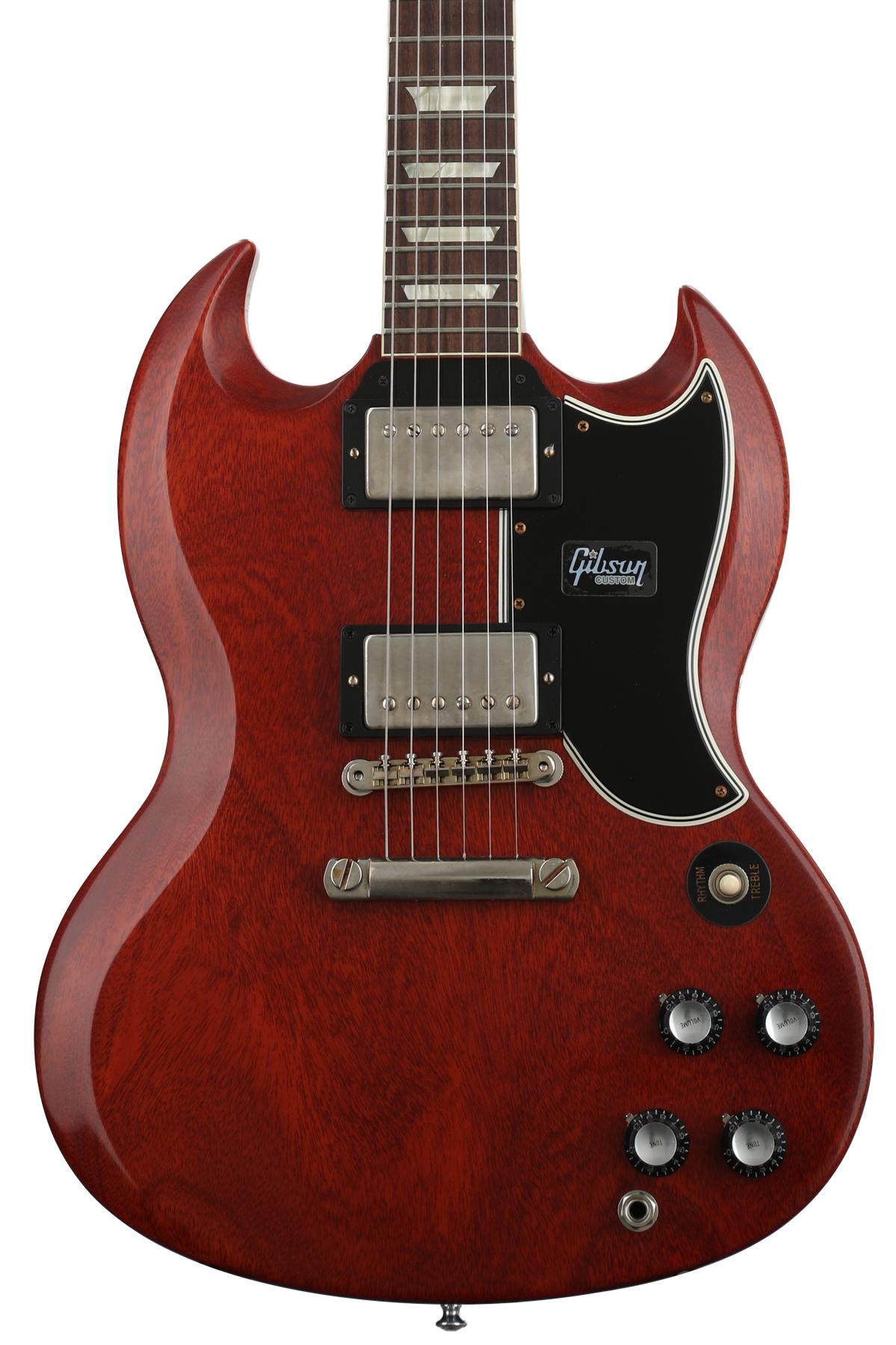 The SG Special still sounds great. Its tone is bright and lean, although it can pick up a lot of noise if one is not careful pumping up the volume. The SG Special can produce a full, warm, and sweet sound, perfect for slaying classic Beatles tunes or other 1960s-era rock groups. 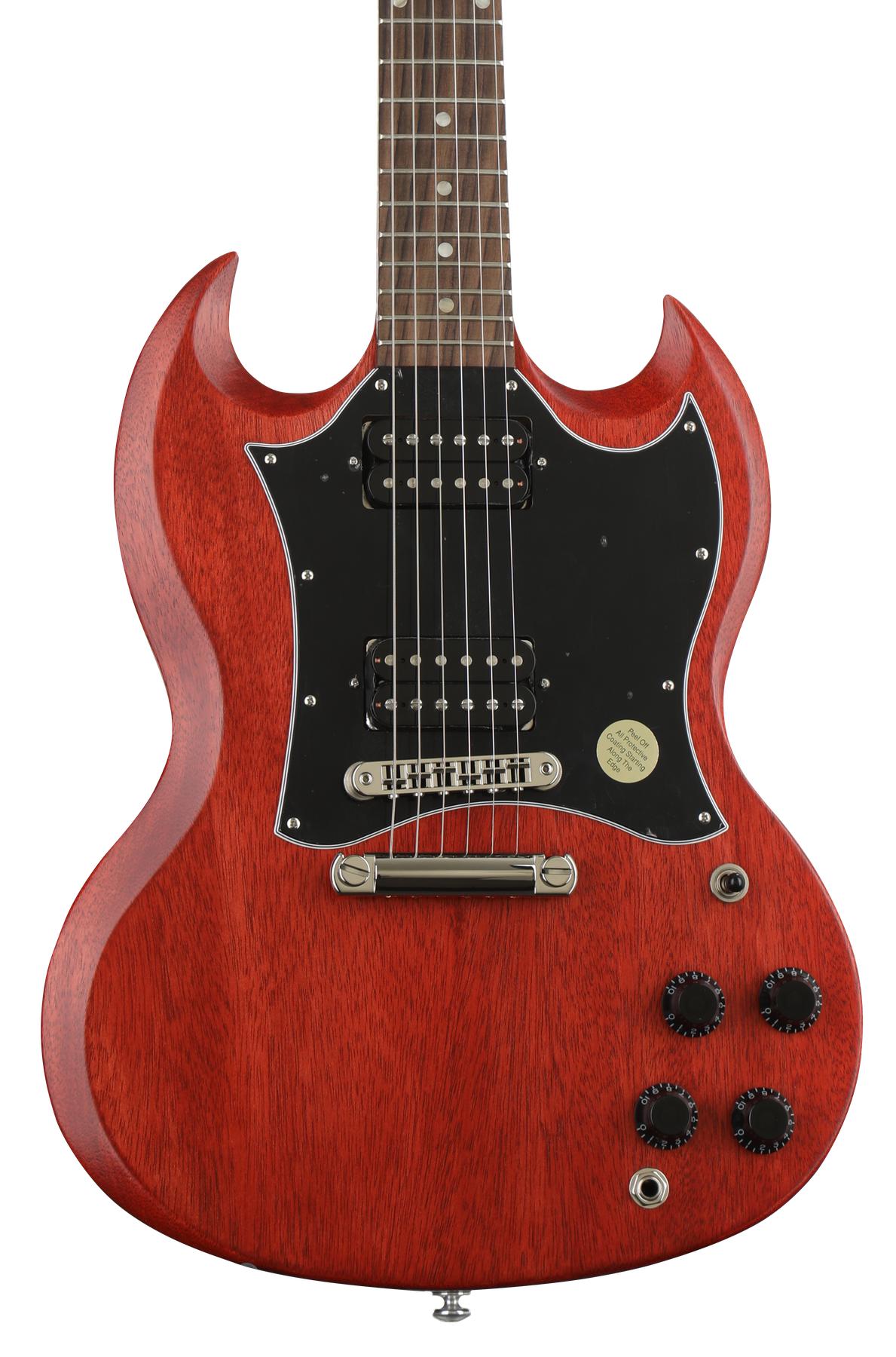 The SG Standard also features chrome covers for its humbuckers, while the SG Special does not have any. The covers improve the Standard’s aesthetics while protecting the intricate design of the pickups.

Controlling the SG Standard and Special’s electronics is pretty straightforward. Each guitar has two volume controls and a pair of tone controllers. They also have a toggle switch, allowing guitarists to choose between modes. However, the SG Special has the toggle switch hardwired to proprietary Orange Drop capacitors.

The Gibson SG Standard has more lavish cosmetic appointments than its more affordable cousin, the SG Special. It features a high-gloss nitrocellulose finish that sparkles in the limelight. Guitarists also have the option of Heritage Cherry or Ebony to make their guitar performances more meaningful.

The Gibson SG Special is also beautiful with the same labor-intensive cosmetic finish as the Standard. However, it has a more back-to-basics kind of look, complete with simple acrylic dot inlays on the neck. The headstock also does not receive the elegant treatment of the Standard. Instead, one gets a silk screened Gibson logo.

Both Standard and Special are a joy to play. After all, these guitars have the same Gibson Les Paul DNA running through them. The only difference is that one guitar offers a close resemblance to the legend while the other is more of a stripped-down version.

Also Read: Gibson SG vs Les Paul – Which is Better?

The Gibson SG Standard and Special are two phenomenal electric guitars. However, if one does not mind playing with single-coil pickups and less spectacular aesthetics, the more affordable Gibson SG Special is the way to go.

Gibson SG Special
4.7
CHECK PRICE ON SWEETWATER CHECK PRICE ON AMAZON
We may earn commission from purchases made from our links, at no additional cost to you.

If one prefers a guitar with physical and tonal characteristics almost similar to the original Les Paul, only the Gibson SG Standard will do.

For Fans of Les Paul

Gibson SG Standard Tribute - Vintage Cherry Satin
4.5
CHECK PRICE ON SWEETWATER
We may earn commission from purchases made from our links, at no additional cost to you.