What is a Dreadnought Guitar? 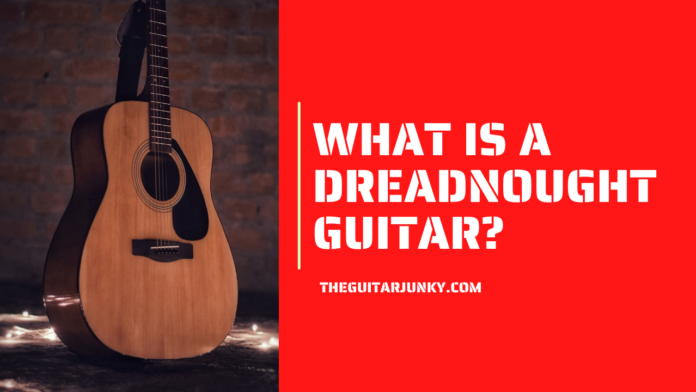 Quick Answer: Dreadnought is the most popular type of acoustic guitar body. It’s characterized by its large body with a broad waist and smaller upper bout. In terms of sound, it’s loud and boomy. This is a perfect guitar type to play rock, pop, bluegrass, and other genres.

In 1916, C.F. Martin & Company first introduced the dreadnought guitar to the world. These guitars were not bearing the Martin logo because they are made for Oliver Ditson Company. But, ‘dreadnought’ has been popular since 1906 because it’s the name of the British battleship, HMS Dreadnought.

It was only in 1931 that Martin began to produce dreadnought guitars under its name. Since then, they are highly desired by musicians. They became the standard for bluegrass music. And today, this style has been copied by other manufacturers, making it the most common body type of acoustic guitars.

Size of a Dreadnought

Also Read: ¾ Guitar vs Full Size: How to Choose the Right One?

Sound Characteristics of a Dreadnought Guitar

Since it has a large body, expect a loud sound coming out of a dreadnought guitar. It has a large soundboard, plus its shape allows more reverberation for an increased volume. Dreadnought guitars are suitable for acoustic rock, bluegrass, pop, country, and other music genres.

Difference Between Dreadnought and Regular Guitars

Considered as the all-rounder guitar type, dreadnought acoustic guitar isn’t just popular for no reason. Since it has a big body, it offers more projection and volume. It has square shoulders and bottom, and a broader waist. If you put all guitars side by side, you can see without measuring that the waist of a dreadnought is larger than a concert, a Triple O or even a Jumbo.

Most dreadnought guitars have their necks attached on the 14th fret, and they usually have a slightly narrower neck. Though this is not true for all, the narrower neck aids in the playability of the guitar. Hence, it’s easier to chord and good for flatpicking.

Is it Better? What are Other Guitar Types?

It depends on the use of the player. Some musicians get a dreadnought because it’s the most popular one on the market. Others love it because of the better projection and it’s more suitable for flatpicking. Smaller players aren’t comfortable with its large body and prefer something else.

Other than the dreadnought, there are other types of acoustic guitar, including the parlor, Triple O, Concert and Jumbo, to name a few.

Parlor type is a small and slender-bodied guitar with a bright tone. It has a round shoulder with neck joining the body at 12th fret.

Triple O or the Grand Auditorium has a wider and deeper profile with a balanced tone and greater volume. It has almost the same design as the Grand Concert.

The Concert type is derived from classical guitars. It has a shallow body with round shoulders. It has bright and trebly tone which small players and young musicians love.

Dreadnought is a type of acoustic guitar body. It’s the most popular because it offers more volume and greater projection with its large body. So, for those who want to play bluegrass, country, acoustic rock and enjoy flatpicking, dreadnought is a great choice. However, fingerpickers may look for something else.