Epiphone Les Paul Studio vs Standard – Differences, and Which is Better? 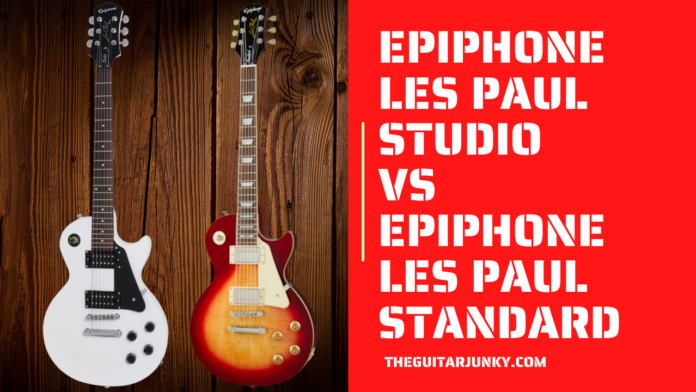 Gibson bought Epiphone in 1957, widening the two brands’ guitar offerings and attracting more artists into the fold. Since Gibson is famous for its Les Paul guitars, Epiphone executives decided to give guitarists better access to an LP without breaking the bank. Hence, the Epiphone Les Paul Standard.

However, low-intermediate guitarists still find the Epiphone LP Standard’s price a bit prohibitive. That is why Epiphone stripped down the Standard to its bare essentials to produce the Les Paul for the masses – the Epiphone Les Paul Studio. But is it worth it? Epiphone Les Paul Standard
4.7
CHECK PRICE ON SWEETWATER CHECK PRICE ON GUITAR CENTER
We may earn commission from purchases made from our links, at no additional cost to you.

Sporting the classic styling and performance of a legendary Les Paul, the Epiphone Les Paul Standard is perfect for budget-conscious LP fans. It produces warm and sweet sounds, has a vintage look, two ProBucker humbuckers, and enough cosmetic enhancements to get it ready for any performance. Epiphone Les Paul Studio LT Electric Guitar
4.5
CHECK PRICE ON SWEETWATER CHECK PRICE ON GUITAR CENTER
We may earn commission from purchases made from our links, at no additional cost to you.

The Epiphone Les Paul Studio is an excellent beginner’s electric guitar, with a nice quality finish and exceptional tonal performance for its price. This guitar has a straightforward design, a pair of Alnico Classic humbuckers in an open-coil design, and enough features to wow the crowd. 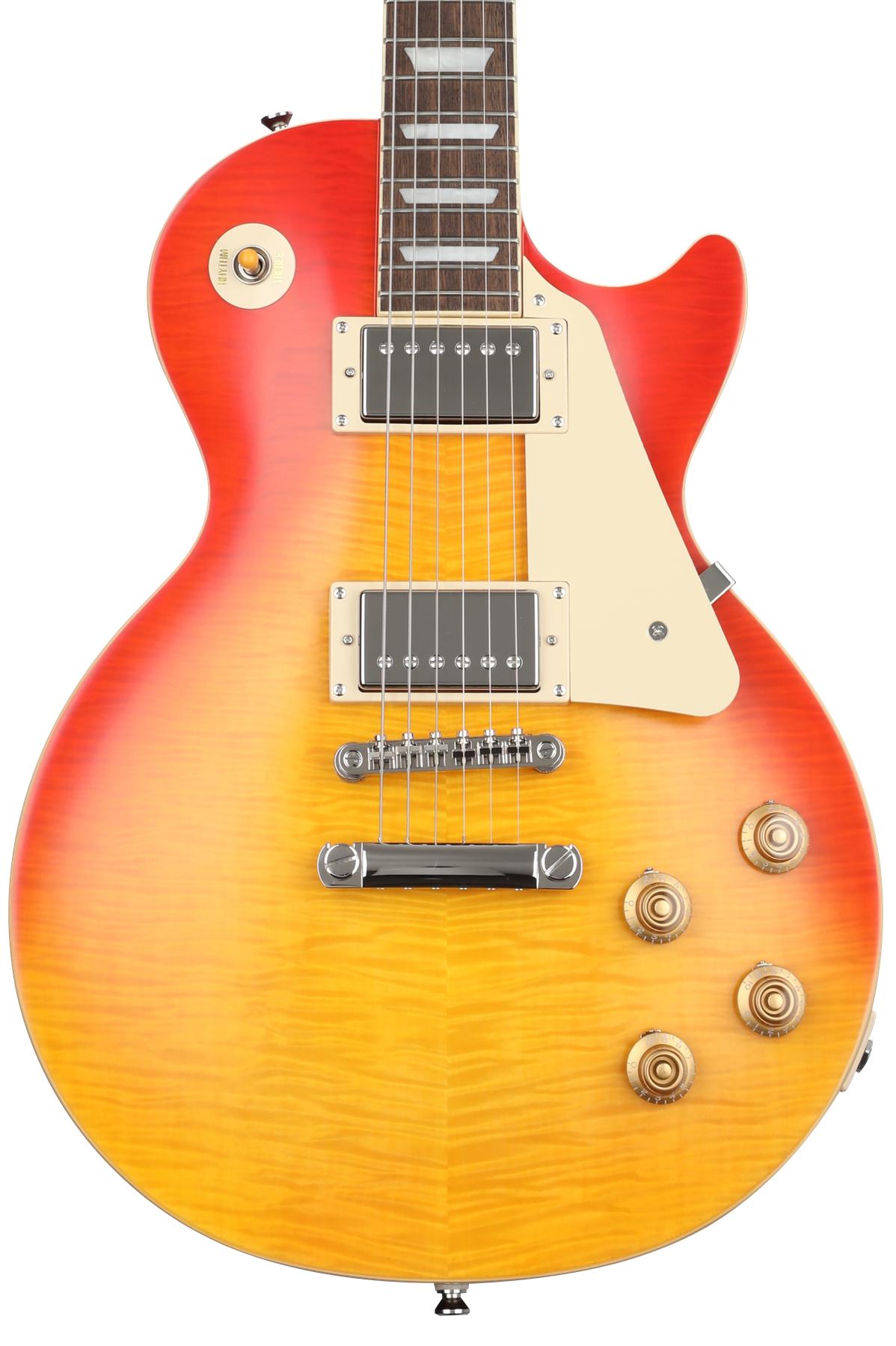 The neck has a set-in design with the guitar body, accommodating an Indian laurel fretboard that is quite pleasant to finger play. The trapezoid inlays characteristic of Les Paul guitars is also present, giving the Epiphone LP Standard its iconic styling. It also helps that the guitar has Gibson’s cream binding.

One does not get the same attention to detail with the Epiphone LP Studio. However, it still comes with a mahogany construction that gives it excellent sound characteristics, made more pleasant by adding Gibson-worthy electronics and hardware.

Playing the Epiphone Les Paul Standard and Studio is like playing the same instrument. There is no perceptible difference between the Studio and Standard’s tonal quality and acoustic dynamics, despite the guitars having different pickups.

The Epiphone Les Paul Standard features a pair of ProBucker humbuckers with the same genetic blueprint as other Gibson greats. In theory, the ProBuckers should give the Standard the edge over the Studio’s Alnico Classic humbuckers. Real-world applications show the two pickup systems are head-to-head.

The difference is in the pickup covers. The LP Standard features pickup covers similar to the Gibson SG Standard, while the LP Studio only has an open-coil design. The Studio bares the pickups for the rest of the world to see. Unfortunately, the Alinco Classic tends to grow hot faster than the ProBuckers.

Compared to a Gibson SG Standard, the Epiphone Les Paul Standard is lighter by a few ounces because of the thinner maple top. The same is true for the LP Studio, lending the guitars lightweight characteristics that make for more comfortable playing.

The neck feels solid and smooth, ensuring a more fascinating finger play across the fretboard. The controls are also accessible and never interfere with strumming or fingerpicking.

Epiphone designed its Les Paul Standard with the budget-conscious guitarist in mind.

While the LP Standard is already affordable, the Les Paul Studio is more so. It is a stripped-down version of the Standard, free of the humbucker covers and the fancy detailing on its guitar body, neck, and fretboard. The LP Studio is perfect for beginner guitarists who love a Gibson but do not have enough money to buy one.

Also Read: Gibson SG Special vs Standard – Which is Better?

The Epiphone Les Paul Standard and Studio are excellent affordable alternatives to a Gibson Les Paul. However, one cannot expect the musical performance to be at par with the legendary guitar. Nevertheless, both electric guitars offer something to aspiring artists everywhere.

Epiphone Les Paul Standard
4.7
CHECK PRICE ON SWEETWATER CHECK PRICE ON GUITAR CENTER
We may earn commission from purchases made from our links, at no additional cost to you.

The Standard is suitable for anyone who wants a Les Paul guitar without the obnoxious price tag, complete with a classic design and great harmonics. If the Epiphone Les Paul Standard remains beyond one’s budget, there is always the LP Studio to consider.

Epiphone Les Paul Studio LT Electric Guitar
4.5
CHECK PRICE ON SWEETWATER CHECK PRICE ON GUITAR CENTER
We may earn commission from purchases made from our links, at no additional cost to you.