10 Best Ramones Songs of All Time 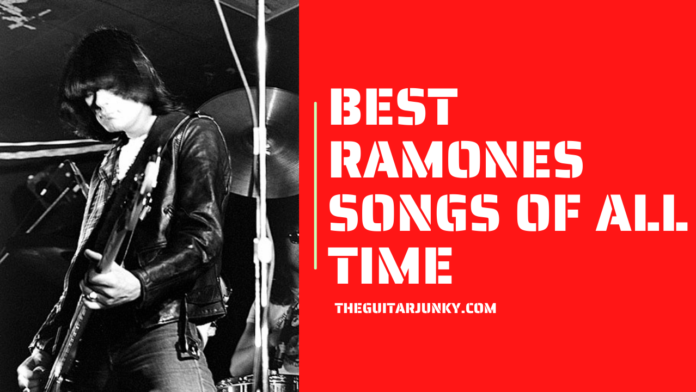 Ramones is always referred to as the first-ever punk rock group.

They are one of the legendary rock n’ roll bands in history, and although their accolades are limited commercially, they are – until now, one of the most influential bands in the US and globally.

To the untrained ear, all the best Ramones songs are just the same – short, fast, comical, and simple, but every song and lyrics were unique, with each a story to tell.

Ramones deserved more, and although they were mostly unrecognized, their songs remain a legacy and will often be played regardless of the time of the year.

In this article, we would reminisce and enjoy authentic and raw rock and roll – Ramones style with their top ten songs, and before you know it, you are a true Ramones believer.

The song’s title holds the same story as the music, and that is about a teenager who underwent a lobotomy due to having brain damage from too much exposure to DDT, a synthetic agricultural insecticide.

This song was initially written for Stephen King’s 1989 film adaptation with the same name.

The story goes that being a huge Ramones fan, King invited the band to his home, and he handed a copy of his novel to Dee Dee Ramones, who retreated to the basement, and after an hour, Dee Dee came back with lyrics to their new song.

Pet Sematary is one of the band’s biggest radio hits and is almost a crowd favorite during their concerts.

This song is not a Ramones original, but the band captured the very essence of the struggles of a teenager wanting to be anybody compared to other artists who also did their version of the song.

Needles and Pins is a significant tribute to the band’s 60’s roots, and this song will always be a highlight of their career.

Cher’s to Stevie Nick’s version are all exceptional, but nothing beats that punk and rock n’ roll influence done by Ramones.

This song has double meanings, with one story having a more dramatic and action flair into it.

The protagonist lyrically shares the story that the Ku Klux Klan kidnaped his girlfriend as she makes her way to LA for the holidays and is asking help from the listeners to call the authorities and help find out if she’s still alive.

Another story that Marky Ramone claimed is that this song was based on Joey’s experience at a mental institution where he met an African-American woman where; the woman was released after a few days causing Joey to be depressed.

This song marks a musical difference in that classic Ramones sound, and the change was incorporated in the hopes of better commercial success and recognition.

In a way, Ramones attracted a bigger audience with this song, and this was even used in the opening of Dreamworks 2007 Shrek the Third.

Do you Remember Rock N’ Roll Radio? celebrates the band’s younger rock and roll memories while evaluating the trend of playing nostalgic songs on the radio instead of giving new music its deserved airtime.

This is the story of Doug Colvin, Ramone’s Dee Dee, as he moves to New York in the bid to escape his abusive father.

His coastal journey turned into a song that shares his personal experiences, and this one has cemented itself as one of the Ramones classics.

This is one Ramones song that achieved success at it peaked #66 on the Billboard Hot 100.

In 2013, it was also used by Queens Economic Development Corporation for their radio ad campaign to help promote New Yorkers back to Rockaway Beach after Hurricane Sandy.

An emotionally charged song intended for the Bitburg controversy where US President Reagan visited the German WWII cemetery where many Waffen-SS soldiers are buried.

Based on lyrics, this is not the standard Ramones story, and this, again, was not commercially a hit but critically, it was positively received and appreciated.

This is 100% one of Ramones’ more popular songs claiming the #81 spots in the Billboard Hot 100 countdown.

“Sheena” in this musical story is Sheena, the comic character and Queen of the Jungle, and follows the impressive possibility that a wild jungle girl can enjoy punk rock music.

For many, it is the first punk rock rebellion song of the teens, and it became one of their more successful songs, being ranked #5 at the 1977 NME Tracks of the Year.

It is also part of Rolling Stone’s 500 Greatest Songs claiming the #461 spots.

Thanks to its iconic “Hey! Ho! Let’s go!” and motivating rallying cheer, this Ramones song is commonly used in sports and competitions.

Another song from Ramones was included in Rolling Stone’s The 500 Greatest Songs of All Time but placed on the 92nd spot.

Rolling Stone had this song in #18 on its“Top 100 Greatest Guitar Songs” in 2008 and the following year was hailed by VH1 as “25th greatest hard rock song.”

The band’s most-streamed and best song.

I Wanna Be Sedated is the brainchild of Joey Ramone after he accidentally burned himself with hot water and had to be rushed to the hospital.

Additionally, the song was also inspired by their un-holiday-like experience in London when the band spent their Christmas there while on tour in 1977-1978.

For first-timers in this city, what they ended up with was not the dazzle but a shut-down tourist spot where they ended up watching movies in their hotel for the holidays.

Ramones will always have a soft and nostalgic spot for the punk and rock n’ roll fans.

This band left a legacy, and although they were not as recognized as they deserved back then, they have made history for the past, present, and future music generations.