Ableton Live is an abundant software which can only be exploited by great keyboard controllers. And, thankfully, Novation endowed the world with its Launchkey 49.

For budget producers and songwriters, this is probably one of the best keyboard controllers for music production.

I don’t own a Launchkey 49, but I have a hands-on experience where I based this detailed review of the instrument. What struck me right away is the 16 RGB velocity-sensitive pads.

I’ll discuss the features, operation, and its performance based on my personal experience.

Admittedly, the moment my eyes landed on the Launchkey 49, I became interested in it. At first, I was curious about the colorful RGB launch pads. But, later, I got the chance to play and break in the instrument.

Before I go into my personal experience, allow me first to walk you through the keys and controls, as well as some functionalities onboard the Launchkey 49. Perhaps, for keyboard controller players, they can easily follow through my review. But, for the sake of newbies and those who are interested in USB keyboard controllers and Novation Launchkey 49, in particular, I’ll go really quick with the controls. 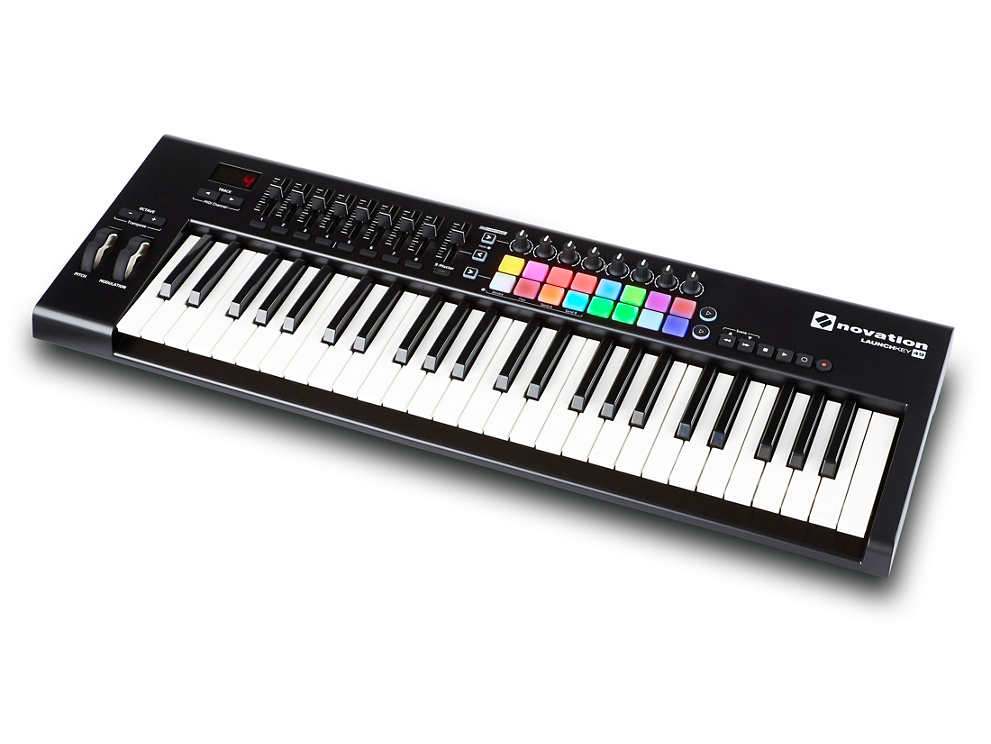 This is a 49-key keyboard controller, which comes with velocity-sensitive synth-action keys. It’s the heart of keyboard controllers, which is mostly used and abused. Though made of plastic, the keys are sturdy and stable enough to take on hard hammering and striking. (While it isn’t necessary, but for the sake of checking how durable the keys are, I did the dirty tricks.)

Anyway, to the left, you can see the pitch and modulation wheels, properly labeled. You can also see buttons corresponding to the Octave up and Octave down. These buttons come with the same purpose, which is to extend the melodic range of the keyboard.

At the upper left, you can see the clock-style display that shows the MIDI parameters being transmitted by the control you’re using. Below it are Track buttons, which are very useful to change tracks in your music software.

Then, there are nine 45mm sliders used for different parameters in your DAW or virtual MIDI devices. Sliders 1-8 have different functions depending on the mapping and software used. The ninth slider is usually dedicated for the volume.

Likewise, the buttons below the sliders have different functions depending on the software used. In InControl mode, buttons 1-8 function as mute or solo buttons for the eight channels. The ninth button can switch the mute/solo function of the first eight buttons.

There are eight rotary controls that also offer DAW/MIDI control. When InControl mode, these act as pan controls, while for Basic Mapping Mode, these controls transmit a fixed MIDI CC message.

Perhaps, you’re already confused, why I used the InControl mode and the Basic Mapping mode. Well, to the right of the sliders, you can see InControl label above three buttons in a vertical position. These buttons switch the operating mode of the sliders, controls, buttons the launch pads.

Let’s continue to the 16 velocity-sensitive launch pads. Next, to the keys, these are exciting pads to trigger different sounds, like drums. As you can see, it has RGB colors. These correspond to the color of the clips or expressive drum beats in Live’s Session view of your software.

Then, you have two round buttons with specific functions in your iOS software or your DAW software. Lastly, you have six transport controls for additional control over your DAW. These include Rewind, Fast Forward, Stop, Start, Loop and Record.

To start with, you need to connect this keyboard controller to your computer — whether Mac or Windows PC via a USB cable. But, unlike other controllers, this one needs to be externally powered, especially when you connect this to your iPad. It cannot be powered by mobile devices and need to have an external 9V power source.

The third port at the back is for the standard sustain pedal.

Once you connect this instrument to your computer, it’s designed to have seamless integration with your music software. The InControl, as mentioned, is integrated into Launchkey 49, so you can easily use the keyboard controller to certain DAWs. However, if your DAW software isn’t compatible with Launchkey, you can use the Basic Mapping Mode.

With Novation’s InControl mode, you can automatically map all the controls in Launchkey — sliders, rotary controls, buttons — onto DAW parameters like pan, faders, mute and solo. But, again, if the software isn’t supported or recognized by the keyboard controller, it’ll access the Basic Mapping Mode so the keyboard can be used as a conventional MIDI controller.

Aside from mapping the controls, another thing that you need to know is the velocity curves. Launchkey lets you set the key velocity to have the volume you want to hear when you strike the keys. By default, the setting is NORMAL.

To change the velocity curve, press the top InControl button and press one of the transport buttons (Rewind=Low, Fast Forward=High, Stop=Fixed, Play=Normal). If you choose the Fixed curve, the velocity curve is disabled and the volume will be at maximum regardless of how hard or soft you struck the keys.

Just like any other keyboard controller, don’t be overwhelmed by all the sliders, buttons and controls onboard. First, focus on the keyboard, as this is the very highlight in the instrument. All the rest of the controls are just to their to ease music production.

So, the keys, for me, are not weighted, yet they feel nice and playable. They are solid and responsive whether I struck them hard or soft. Of course, they vary, depending on the velocity curve I set. The launch pads are also great, though they are stiff, they’re not quite. They are responsive and they are reliable.

Although I have played better keyboard controllers in terms of keys and drum pads. There’s one aspect where the Launchkey 49 excels — the DAW integration. After connecting to your computer or iPad, it’ll automatically map controls in a breeze. Novation is doing a great job with its InControl function.

Novation Launchkey 49 is a decent keyboard controller. It has exciting features, especially the RGB launch pads, that brings the controller to life, aesthetics-wise. Its price fits anyone’s budget, especially for those who are longing to have more control over their DAW software.

Though not the best, but all the controls onboard are working and do their job well enough. The DAW integration is the gem in this keyboard controller. Hence, even though there are still a lot better keyboard controllers out there, most producers, choose this because of its quick integration and mapping to the computer software.

Packed with all useful controls along with the reliable 49-note keyboard, Novation Launchkey 49, is a good add-on to your studio. It’s compatible with most popular DAWs today. This integrates faster with the music software in your computer via Novation’s InControl mode.

It’s a lightweight keyboard controller and easy to move around. Yet, it’s not portable because it still needs external power when you connect it to your iPad.

Overall, it’s a good tool to start making music in your studio. No fuss, less wiring, just a USB cable connected to your computer or iPad. So, it shouldn’t discourage you.

Get the Novation Launchkey 49 from Amazon.

All Photos from: Novation Music