However, the MINI Play has a lot more, including the 128 built-in sounds, built-in speaker, and the OLED display that helps you find the sound you want.

Plus, it’s offered at a tiny price, which is perfect for anyone’s budget.

I’ve got the chance to get my hands on the keyboard controller and I can’t want to share with you my experience.

But, I can’t help but spill some beans. This keyboard controller offers a perfect balance of functionality, size and price.

I won’t jump into the functionality and playability of the MPK Mini Play without discussing all the buttons, controls and everything that’s onboard this MIDI keyboard controller.

At the heart of this controller is the 25 synth-action mini keys. Above the keys are different buttons, knobs and pads — all of them are properly labelled for ease of use. 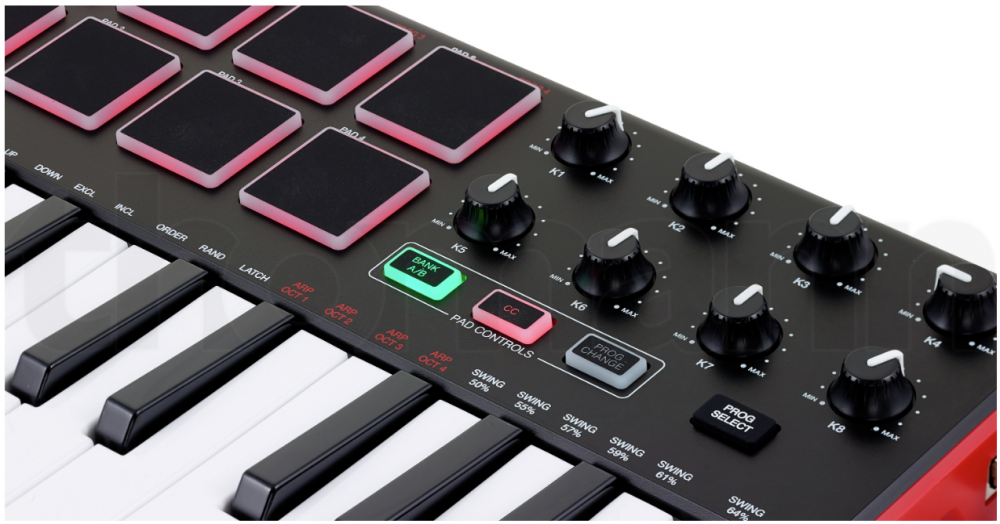 I will start from the upper left to the right. The red and striking feature on the upper left of the tool is the four-way joystick for pitch-bend and modulation control. This MIDI controller has a built-in arpeggiator and tap/tempo button.

It sports Octave Up and Octave Down buttons that help expand the keyboard to the full melodic range. So, even though it’s just a compact keyboard controller, you can still play a full song with these buttons. Additionally, it has a Full Level and Note Repeat buttons under the octave buttons.

Aside from the keys, the drum pads are present in most keyboard controllers. In MPK Mini Play, it has eight red backlit, velocity-sensitive MPC-style pads in two banks, for a total of 16. Again, they are properly labelled for you to easily use them when doing your stuff.

Now, to the right of the drum pads are another ton of knobs and buttons. You’ll find the Keys and Drums buttons, which of course allow you to choose whether to use the keys or the drum pads. Below them you can find Favorites and Internal Sounds buttons.

The Favorites button helps you save the sounds you like. And, the tool allows you to save up to eight sounds via the drum pads. The Internal Sounds button, on the other hand, will allow you to access the 128 different sounds onboard and you can select them via the knob to the right of the OLED display.

Lastly, you have the Pad bank button and the Knob bank button. There are a few knobs to the right including filter, resonance, cutout, volume and so on. You’ll get four assignable Q-link knobs for mixing, plug-ins and more.

It may not seem to be very noticeable, but it has an OLED display on the upper right with a navigation knob right next to it. This display will show which preset sound are you using. And, as mentioned, on top of the 128 sounds, you’ll still get 10 more drum kits.

When you play the keyboard, the Keys button should be activated, for the drum pads, press the Drums button. To access the internal sounds, simply press the Internal Sounds button. You can tweak the sounds to make it your own via the filter and resonance control knobs. To move from one built-in sound to another, you can use the dedicated knob to the right of the OLED display.

If you want to save a particular sound to Favorites, simply press the Favorites and the Internal Sounds simultaneously, then tap any of the pads where you want to store that sound. If you look closely, the pads have two labels — white and red.

Since there are only eight pads, you can only save Favorites up to eight. Accessing the saved Favorites can be done by pressing the Favorites button, and then, the pad where you saved the sound.

When operating this tool with AA batteries, it’ll last up to eight hours of continuous use. And, when you plug the keyboard controller, ensure that you slide to USB from BATT so the batteries won’t drain.

Again, there’s no need to connect the MPK Mini Play to a computer. But, if you’ll connect it, it’ll act as a class compliant USB MIDI controller. It’s a plug-and-play device that needs no driver. Onboard sounds will automatically be turned off, so you can use the MIDI control data in your DAW.

While you can send a MIDI file to your computer, you can also do vice-versa. This can receive MIDI sequences from your DAW. And, because it has 32 voices of polyphony, it can accommodate the same number of individual notes.

The advantage of using MPK MINI Play keyboard controller is that it can be used with a computer and as a standalone device. More often than not, I’m using this controller with batteries. Although it doesn’t give me the volume that I want, with the headphone output I can still appreciate the clarity of the sounds.

Playing this controller keyboard is fast and easy primarily because it has proper labelling, together with the light indication when a particular button is activated. The joystick should be operated in a particular fashion to get the pitch-bend and modulation settings.

Yes, the keys aren’t that responsive, but they are good sometime. Since this is not my primary keyboard, I don’t mind this drawback.

Whether you want louder or softer sound, you’ll get it in the MPK Mini Play. As a standalone keyboard controller, it has a built-in speaker that allows you to make music as you go.

When the tool is battery-powered, it doesn’t give you a full volume. However, you can use the headphone jack to play silently without disturbing others, or you can connect it to an external speaker via the same port and get a louder volume.

The built-in sounds are pretty decent, there are tons of them, so play the ones you love. Although you can’t expect the presets to sound like a real instrument, but at least, they have the tone. And, you’ll get lots of options without spending too much.

With all the built-in sounds and drum kits, plus the built-in speakers, this is a great deal for its price. You can play anywhere without being very noisy because you can also listen through headphones. Above all, it gives you the option to use it as a standalone MIDI controller or a USB MINI keyboard connected to your computer.

From its portability and usability, it’s a good keyboard controller to start with. It’s the best deal you can have that won’t break the bank. Additionally, it gives you more versatility, especially when you’re into music production and always on-the-go.

Akai MPK Mini Play surprises me in a lot of different ways. First, I’m impressed by all the buttons, controls, and the onboard sounds. As an entry-level instrument, you cannot expect it to be perfect with exceptional performance. Though they don’t have the best sound quality, they’re fairly useful for quick music production.

It’s battery-powered or USB-powered, so you can use it anywhere or with a computer, respectively. When using this with battery, it’ll last for eight hours of continued use. If you’re travelling and you need to finish the music you create, this tool will surely come in handy.