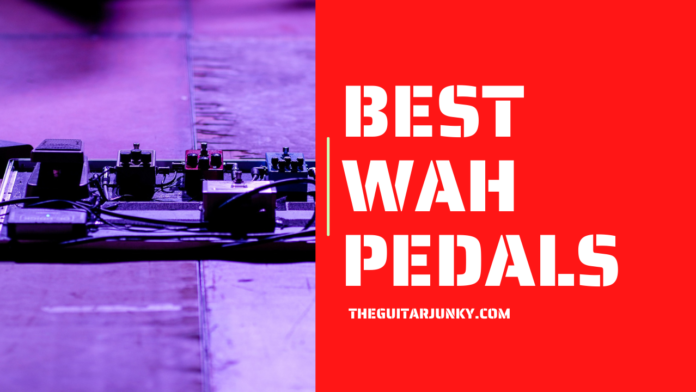 It has long been proved and tested that effects pedals bring a huge difference to our solos and performances. These pedals are like a gift from above.

Belonging to the list of effects pedals are the wah pedals. The iconic “wah” sound and the goodness of the wah pedal that we enjoy today was actually founded in the ‘60s, according to Spotlight. Wah pedals produce a signature cry which instantly changes your guitar tone.

If you’re on a hunt for the best wah pedals, below are our seven best. MXR MC404 CAE Dual Inductor Wah Wah
4.8
CHECK PRICE ON SWEETWATER CHECK PRICE ON GUITAR CENTER
We may earn commission from purchases made from our links, at no additional cost to you.

Combining the abilities of the people behind Cry Baby and Custom Audio Electronics comes the MC404 CAE Wah. This background alone says a lot about the pedal, so you’re sure to get only the best quality components. With its dual Fasel inductors with two distinct voices, the sonic properties of the MC404 are being taken care of.

The MC404 features a built-in MXR MC401 boost/line driver and bright LEDs to tell you the operation status. It also features top-notch CTS potentiometer and true bypass circuitry. One thing that’s notable about this wah pedal is that the emphasis on the high, mid, and low frequencies are excellent on this one. Xotic Effects Wah XW-1 Guitar Effects Pedal
4.7
CHECK PRICE ON SWEETWATER CHECK PRICE ON AMAZON
We may earn commission from purchases made from our links, at no additional cost to you.

Perfecting the old-school vibes, the Xotic Effects Wah Pedal is surely one of a kind. Inspired by the Holy Grail wah, this pedal gives you unlimited sound options. Giving you an organic and unflavoured sound, Xotic Effects has controls for bias, Q, treble, and bass.

Known to have robust construction, the Xotic Effects will last a long time, even after heavy use and abuse. It also offers a minimal footprint, so expect that this will never be trouble on your pedalboard. The adjustability and flexibility of the Xotic Effects make this a versatile one. Dunlop 535Q Cry Baby Multi-Wah
4.7
CHECK PRICE ON AMAZON CHECK PRICE ON GUITAR CENTER
We may earn commission from purchases made from our links, at no additional cost to you.

Popularized by Hendrix and Slash, the Dunlop 535Q Cry Baby Multi-Wah is known to be one of the most versatile wah pedals in the market today. It offers wide range of ton, from narrow and sharp wah to an amazingly broad but subtle one. This is also enhanced by an adjustable and switchable boost which creates endless sustain.

The Cry Baby has experienced lots of innovation throughout the years. So, despite the 28 years of existence, we can’t say that it is an outdated wah pedal. It features revolutionary features like the Fasel inductor, six new wah ranges, and a lot more. Ibanez WD7 Weeping Demon Wah Pedal
4.4
CHECK PRICE ON SWEETWATER CHECK PRICE ON AMAZON
We may earn commission from purchases made from our links, at no additional cost to you.

Despite the fact that Ibanez came late to the wah pedal party, this wasn’t a hindrance for them to become a top competitor. We can clearly prove that with their very own WD7 Weeping Demon Wah Pedal. The WD7 utilizes an “electro-optical” feature that improves its overall responsiveness.

It is also highly tweakable and we can see that with the different controls in its display. Of course, it would not be as good as the other wah pedals if it has no variety or distinction to its sound. The WD7 comes with a nicely built construction, so it’s safe to take it anywhere you want. Dunlop Crybaby GCB-95 Classic Wah Pedal
4.7
CHECK PRICE ON SWEETWATER CHECK PRICE ON GUITAR CENTER
We may earn commission from purchases made from our links, at no additional cost to you.

Another spotlight-stealer from Dunlop is the GCB95, which is also from its Cry Baby series. With its affordability and excellent performance, it will easily catch your attention. It produces the classic wah sound that would remind you of 60s music.

The GCB95 comes with 100K ohm Hot Potz potentiometer which makes it responsive and quick. It also features heavy-duty die-cast housing, so you’re sure that this one is built to last. Producing a range of great quality wah sounds, the GCB95 is clearly worth your money. VOX V845 Classic Wah Guitar Effects Pedal
4.5
CHECK PRICE ON SWEETWATER CHECK PRICE ON GUITAR CENTER
We may earn commission from purchases made from our links, at no additional cost to you.

Inspired by the original VOX pedal in the 60s, the V845produces a classic and iconic wah tone. Now with a very durable and sturdy construction and updated features, the V845 is surprisingly affordable.

It is battery-powered, but also has an AC power connector so you could save batteries. The V845 comes with an all-black finish, fitting perfectly on your pedal board. Morley VAI-2 Steve Vai Bad Horsie 2
4.5
CHECK PRICE ON SWEETWATER CHECK USED PRICE ON GUITAR CENTER
We may earn commission from purchases made from our links, at no additional cost to you.

Considered as one of the top players in the world of wah pedals, the Morley VAI-2 Steve Vai Bad Horsie 2 Contour Wah possesses versatility, outstanding performance, and high quality construction.

It uses a switchless design and can be de/activated simply by stepping on it. The VAI-2 is perfect to use especially if you’re always on-the-go. This wah pedal has two modes—Contour and Bad Horsie.

Each mode features a sound with distinct warmth and intensity. It also features Clear Tone buffer circuit which ensures pure guitar tone and maintains signal level in bypass and wah mode. The VAI-2 is complete with easy battery access and a LED indicator.

Factors to Consider When Buying a Wah Pedal

With numerous wah pedals to choose from, buying the best one for you might be a hard task than it already is. Determining which one is the best is a highly subjective matter. This is where factors on buying a wah pedal would come in handy.

If you’re a beginner, knowing the difference between the two might give you some new information. To put it simply, optical and mechanical wah pedals do the same thing but with different methods. It all boils down on how each of the two works. 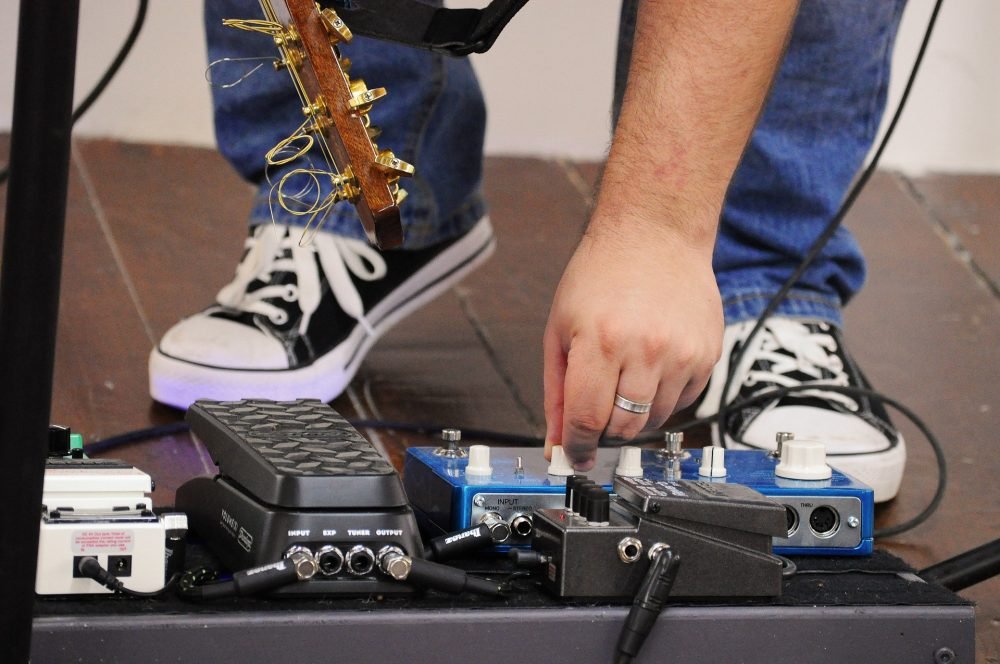 According to ProAudioLand, wah pedals with a mechanical connection feature gears and potentiometers which respond to the physical shift of the pedal (up or down) or other toothed mechanism. Optical wah pedals employ the use of lasers or light, hence being “optical”, rather than potentiometers.

The benefit of using the optical method is that there is no potentiometer to wear out, rust, or oxidize, which is an eventual problem mechanical wah designs face.

Genres That Work Well With Wahs

I think we all know that considering the genre you play should never be taken for granted. Fortunately, wah pedals work well with a lot of music styles.

Players who like heavier music styles would really benefit using wah pedals. Rock and metal music are often laden with sweet, maybe a bit technical solos, so a wah pedal is not only necessary, but warmly recommended. 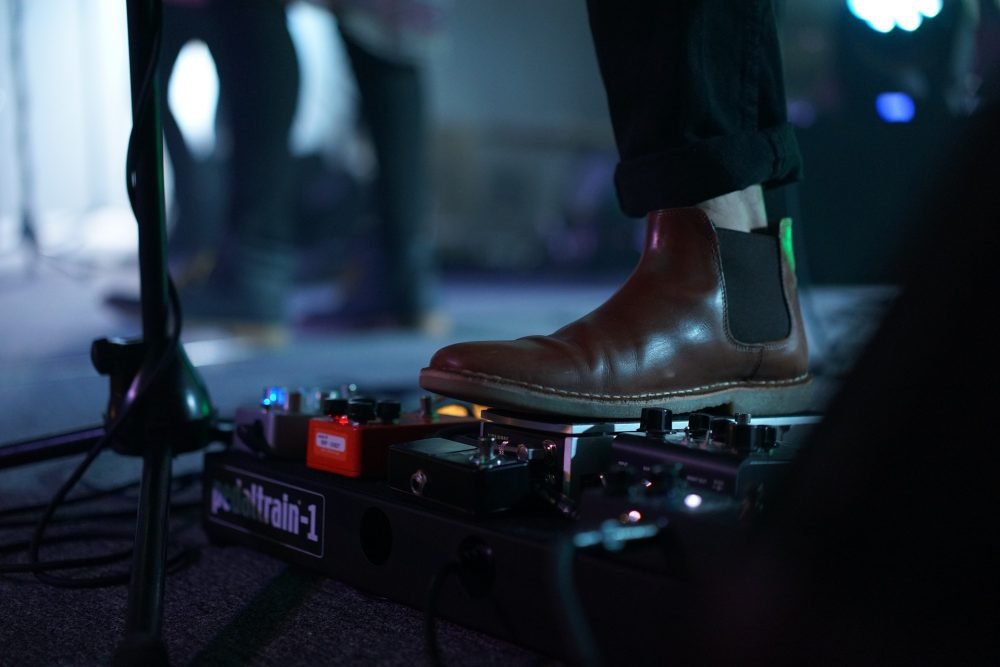 Jazz and Blues are also added to the list. These genres are perceived as music styles with lots of emotion. And these genres won’t feel as expressed as they are without the help of your good old wah pedal.

Funk music players could also enjoy the goodness a wah pedal brings. And, who could forget punk and punk rock music?

Your potential wah pedal needs to be as reliable as it can get. It should have a sturdy build and heavy-duty construction so it’s going to last even after heavy use (or abuse?).

You also need to consider the parts used. If the potentiometer breaks or gets rusted easily, your pedal is going to stop working.

MXR MC404 CAE Dual Inductor Wah Wah
4.8
CHECK PRICE ON SWEETWATER CHECK PRICE ON GUITAR CENTER
We may earn commission from purchases made from our links, at no additional cost to you.

Long story short, the best wah pedal on this list is the MC404 CAE Wah. The fact that it’s made by the people behind Cry Baby and Custom Audio Electronics says a lot about the product.

How To Build Your Board: Will 2023 Be The Year Of Versatile Effects Pedals?