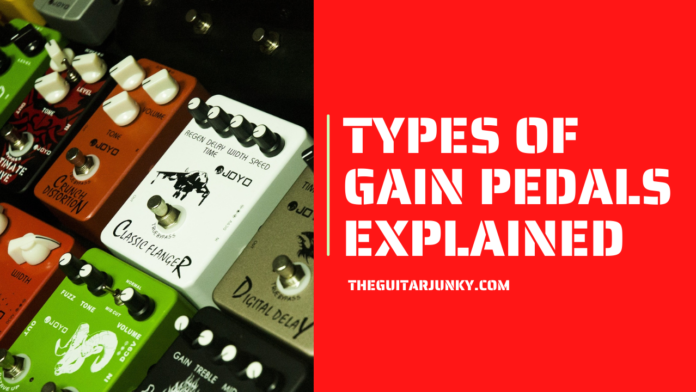 If you play the electric guitar, you’re more than familiar with the varying levels of gain (aka distortion or overdrive) that a player can take advantage of. Almost all genres of guitar music, from pop to rock to blues all use various gains. But what actually makes them different and what do all these buzz words mean that you hear in forums, product demos, and articles? Well, look no further, as we’ll break down the 5 most common gain tones in terms of sound, origin, and recommend a few pedals to check out.

This one is even sort of a technicality, as not all boost pedals are meant to create a more overdriven sound. What boost pedals do is add volume to your sound, perfect for kicking in right before a solo in a live band setting to help your guitar cut through the mix. In fact, many clean boost pedals try incredibly hard to only add volume, without any signs of gain added to your tone. However, at the end of the day most succeed in adding some amount of gain to your tone in addition to all that volume. This is most often seen with tube amps because the increased volumes hits your tubes harder, creating more natural breakup and drive. Some players even use multiple boost pedals into a tube amp in place of a traditional overdrive or distortion pedal. In fact, this is sort of the idea behind the Boss Blues Driver, which essentially pushes your signal through a series of transistors instead of more traditional “op amp”-based drive pedals.

While there are a ton of affordable options in this category, some of the most sought after pedals of all time are transparent overdrives. A transparent overdrive is an effect that sets out to take your guitar signal and add only volume and gain, with no changes to the actual EQ of your signal. No mid-boost like the incredibly popular Tube Screamer TS-9, no added bass, no added treble like a Rangemaster Boost. It just takes whatever you put in, adds some overdrive, and spits it back out. Some of the most expensive and rare overdrive pedals in the world are transparent overdrives like the Klon Centaur, Analog Man King Of Tone, or the vaunted “Timmy”. For more affordable options, check out the Electro Harmonix Soul Food (a staple on my own board) or the J Rockett Audio Designs Archer. These pedals are sometimes used instead of a traditional boost pedal as well.

This category gets its name from the hugely popular Ibanez/Maxon Tube Screamer circuit, which is famous for coming in a green housing. Tube Screamers are meant to mimic the sound of a cranked tube amp naturally breaking up, resulting in sweet, rich overdrive. However, Tube Screamers are famous for adding a mid-boost to your signal. This means it changes the EQ and thickens up the sound of some classic pickup designs like Fender single coils (very treble rich) and the Gibson humbucker (very bass rich). The term colored comes from the fact that they “color” your guitar signal in something new and different from what you put into the pedal. Colored overdrives are not limited to boosting mids, as some boost the high or low end of your signal as well, though the Tube Screamer is undeniably the most famous and widely used example. Some cool pedals in this category to look into include the Ibanez TS9 and Boss SD-1 (not to be confused with the DS-1).

Distortion is the most popular guitar effect in the history of the instrument. Don’t believe me? Just ask Boss, whose DS-1 pedal is the highest selling pedal of all time. While that’s partially due to its affordable price tag, it’s also because that DS-1 circuit is just straight up awesome. In fact, many of the most popular pedals around are distortion, like the Pro Co RAT. Overdrive pedals basically just take your tone and push it harder, to mimic a cranked tube amp. Distortion pedals take your tone and absolutely smashes it up by saturating and clipping the signal into a harsher territory. In fact, people used to describe low quality or broken audio equipment by saying the sound was “distorted”, so you can think of a distortion pedal as breaking your signal and amplifier to create that beloved crunch and hiss.

The Most Sought After Gain Type: Fuzz

Everyone likes fuzz, but not everyone knows how to use fuzz or dial it into correctly. Fuzz is distortion on steroids, with more saturation, more clipping, and a compressed sound that provides sustain, feedback, and anything but a crystal clear signal. Fuzz is one of the most popular guitar effects out there and you’ll constantly find musicians, YouTubers, and journalists who are still searching for the perfect fuzz tone despite years of playing and dozens of purchases. It’s heavily used by bass players, and has been strongly revived in the last decade by acts like Jack White and The Black Keys. With what seems like a never-ending quest for the next great fuzz, you’ll find hundreds of pedals from affordable & boutique builders alike. Some of my favorites are the Fat Guy Little Coat Fuzz, the Danelectro 3699 fUZZ, and the venerable Electro Harmonix Big Muff Pi.